Mitigating Circumstances for the Dictator

The events on the opposite side of the Mediterranean are an embarrassment for Europe. Every politician knows that Tunisia is a police state, but to date, the Europeans have claimed mitigating circumstances for President Ben Ali. By Rudolph Chimelli

Tanks and soldiers deployed against civilians: President Ben Ali referred to the demonstrators as "terrorists" and has now ordered the military to patrol the capital Tunis

​​ Between 17 December, when an unemployed graduate burned himself to death, and the beginning of this week, 35 people have died in the protests against the Tunisian regime. "This figure is based on a list of names of the victims we know of," said Souhayr Belhassen, president of the International Federation for Human Rights. "The real number is higher," she added. According to estimates, the death toll is now at 50.

Schools and universities have also been closed around the country to prevent young people from gathering. In Kasserine close to the border to Algeria, where the clashes have been most severe, the Tunisian army took over the suppression of the protest rallies.

By that point, all the city's police stations had been burned down. Public offices, banks and other symbols of the state were also set alight during the days of rioting, with numerous shops looted. As the French newspaper Le Monde was informed by telephone, soldiers attempted to prevent local mourners from gathering to bury their dead.

Also on Monday, Tunisia's President Zine el-Abidine Ben Ali gave his third televised speech since the riots broke out. He promised to create 300,000 jobs by the end of the year, in addition to the 50,000 jobs allegedly already pledged by business leaders. "This is my personal pledge," he said. Every project exceeding a certain size, he went on, would be exempted from taxes for ten years for this purpose.

Unemployment among 15 to 29-year-olds is a third higher in Tunisia than in neighbouring Algeria and Morocco. According to World Bank statistics, 37 per cent of graduates in Tunisia are still unemployed three and a half years after their taking their final exams. 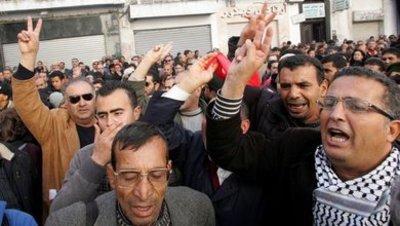 Uprising of the oppressed: the major protests against Ben Ali's policies and high unemployment in Tunisia began after a young unemployed graduate set fire to himself before Christmas

Yet although the government acknowledged last weekend that the "people's demands for work" were justified, the president still referred to the rioters as "terrorists" in Monday's speech.

He threatened masked gangs, who attacked public buildings and private homes during the night and injured or killed members of the security forces, with the full force of the law. The same applied, he said, to "hostile elements in the pay of foreigners", which were a threat to the country's interests. Tunisians interpret this as a reference to opposition activists in exile.

The 74-year-old head of state has been in power for 23 years, entering his sixth term of office in November 2010. In the most recent presidential elections, he allowed his share of the vote to fall from the usual 99 to 96 per cent.

Few Tunisians expect his promises to bring calm to the country. It is a widely known fact that the president's family clan controls large parts of the economy, harvesting major profits. The doctor and human rights activist Moncef Marzouki, who once made a vain attempt to run for the presidency, called his country "a mafia dictatorship" in Tuesday's Le Monde. Marzouki lives in France.

The events on the opposite side of the Mediterranean are an embarrassment for Europe. Every politician knows that Tunisia is a police state, yet to date, the Europeans have claimed mitigating circumstances for President Ben Ali.

Embarrassed silence: France's President Nicolas Sarkozy has so far refused to comment on the events in Tunisia

​​For a start, he has secured annual growth of four to five per cent, not least by opening wide the country's doors for foreign investment. Even more importantly for the Europeans, he has rigorously suppressed Tunisia's Islamists, despite the fact that the country's political Islam was one of the most moderate and intellectually developed movements of its kind in the Arab world. Today, Tunisia's Islamists are either dead or scattered both at home and abroad.

The death of 35 people on the streets of Iran would prompt moral outrage across Europe; not so the deaths in Tunisia. The reaction from Paris has been decidedly lukewarm. The French government spokesman François Baroin commented that his government naturally regretted the violence and appealed for calm because only dialogue would resolve the problems.

Agricultural Minister Bruno Le Maire said it was not for him as a Frenchman to judge a foreign government. Tunisia's President Ben Ali, he added, had achieved much and was often misjudged. Minister of Culture Frédéric Mitterrand, a nephew of the former socialist president, commented on television that he found it "completely exaggerated" to call Ben Ali's regime an "unequivocal dictatorship".

During Ben Ali's state visit in 2008, President Nicolas Sarkozy attested: "I have full trust in your will to expand the space for freedom." On a similar occasion, his predecessor Jacques Chirac had caused a sensation with his comment that the foremost human rights were food, medical care, education and housing.

Only the EU's High Representative for Foreign Affairs and Security Policy, Catherine Ashton, called in a press release for the immediate release of detained lawyers, journalists, bloggers and other peaceful demonstrators. She expressed her sympathy with the families of the victims and demanded respect for fundamental freedoms.

Social Unrest in Tunisia
"We Have a Right to Work, You Robbers!"
Renowned Tunisian human rights activist Sihem Bensedrine details the extent of the current social unrest in Tunisia and describes the alarming way in which freedom of expression is being suppressed in her country

Presidential Election in Tunisia
Democracy His Way
What are we to make of it when Ben Ali, Tunisia's much venerated president and ruler of the Palace of Carthage, is prepared to accept only 89.62 per cent of the vote? And this from someone more used to commanding the kind of figures associated with voting in Soviet times. A commentary by Hamid Skif

END_OF_DOCUMENT_TOKEN_TO_BE_REPLACED
Social media
and networks
Subscribe to our
newsletter