Skip to main content
Sevruguin's Images of the Orient

Cultural Migrants Between Armenia and Persia

​​An old black-and-white photo dating from 1899: a five-year-old boy dressed in an Oriental suit of armour and helmet, and armed with a shield strikes an aristocratic pose.

It is André Sevrugian, son of the Armenian-Iranian photographer Antoine-Khan Sevruguin. He is dressed up as Rostam, the hero from the Persian epic Shahnameh, which would become the focus of his artistic work in later life.

This photo and another 96 works are on display in the exhibition "Sevrugian: Images of the Orient in Photography and Painting 1880-1980" in Frankfurt's Museum of World Cultures.

The two artists in question are father and son, descendants of a cosmopolitan family of diplomats from Tehran, who, despite their Christian-Armenian identity, were deeply rooted in Persian culture. The works of art on display are from the collection of Emanuel Sevrugian, Antoine-Khan's uncle, and the son of André Darvish, who now lives in Heidelberg.

On the threshold of the modern age

The photographer Antoine-Khan Sevruguin was a pioneer in his profession during his lifetime. His photos impressively document an era on the threshold of the modern age and reveal the photographer's awareness of the profound changes happening around him in his country. 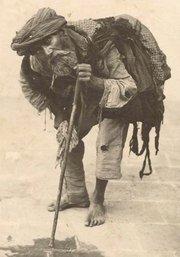 Sevruguin or Sevrugian? The different spellings of the family surname come from the fact that father Antoine-Khan elected to use the French spelling of his Armenian surname

​​Antoine-Khan travelled several times through the provinces of Persia to capture monuments and everyday scenes of life on camera. He worked for the Shah in the period from Naser ad-Din to Reza Pahlavi and counted European archaeologists among his clients.

His open-minded nature made it possible for him to cultivate an intensive exchange with a variety of people throughout the country: from Naser ad-Din Shah's personal physician to the country's intellectuals; from poor rural folk to urban city dwellers of Tehran; from tribal chieftains to Sufis. In terms of culture and society, he travelled back and forth between a number of cultures and social spheres.

His photos contradict the image of a pre-modern and backward Iran in the nineteenth century that was bequeathed to us by Western Orientalists and ethnologists of the time.

​​While social history studies about this era depict women in harems as the passive objects of the shah’s sexual appetite, these photos are more reminiscent of family photos of mothers and their children.

Sevruguin's portraits are not the stereotypical genre photos that were produced en masse for curious Europeans at the time. Instead, the value of Sevruguin's photos stems from their documentary character and their distinctive artistic style.

Sevruguin always underscores the personality of the people. European scholars and other travellers to the Orient, in contrast, tended to take photos that made it easier to categorise the people and their lives while corroborating their own preconceived notions of the "Orient".

Antoine-Khan was also open to influences from Persian-Islamic culture. For instance, Ferdowsi's epic "Book of Kings", Shahnameh, was often recited at feasts held at Sevruguin's home. Sufis and Muslim scholars were invited to take part in the intellectual exchange.

Antoine-Khan's son André Sevrugian soaked up this culturally porous environment as a child and later dedicated his life to the illustration of Persian poetry.

A new chapter in Persian painting

After studying painting at the Académie des Beaux-Arts in Paris in the 1920s, André "Darvish" Sevrugian began channelling new impulses, elements of Western painting, into the rigid, stagnant style of book illustrations.

In contrast to the traditional style of illustration, he placed his figures at the heart of his images and depicted them with individual, emotional facial features expressing sorrow, laughter, anger and love.

Those who behold his illustrations do not experience cut-and-dried patterns, but figures that are alive and dramatically vivid. His style opened up a new chapter in modern Persian painting.

​​Starting in 1924, "Darvish", his nom de plume, spent ten years in ascetic seclusion working on the illustration of the great epic Shahnameh, Ferdowsi's "Book of Kings". The pictures were displayed for the first time in 1934, just in time for the thousandth anniversary of Ferdowsi's birth.

It was an overwhelming success for the as yet unknown artist. His works were displayed in Hyderabad, Calcutta and Bombay, and later in Vienna, Berlin, Brussels and London.

Darvish was also the first artist to compose these pictures deliberately as paintings. Traditionally, illustrations serve as a visual supplement to the narrative, but with Darvish, the text flows around the depicted scene and is a compositional element in the picture.

After his return from Paris, Darvish founded a philosophical circle with other intellectual friends – among them Sadeq Hedayat and Bozorg Alawi – who gave him the nickname "Darvish", his later nom de plume, because of his deep interest in Sufism and his ascetic lifestyle.

Darvish spent his life exploring the world of mystical poetry by Omar Chayyam, Hafez and Baba Taher, who were the inspirational sources for his subsequent work.

Adding to the attraction of this exhibition is the fact that it records and highlights the vicissitudes of the life of this Iranian-Armenian family of artists over the course of a century, a family that lived not between, but in both cultures.

Translated from the German by Nancy Joyce.

Hafez in Europe
Persian Poetry as Reflected in German Romanticism
Together with German and Persian musicians, the baritone opera singer Holger Falk further developed German music by Johannes Brahms and Robert Schumann that was composed based on Hafez' poetry. By Ali Attar