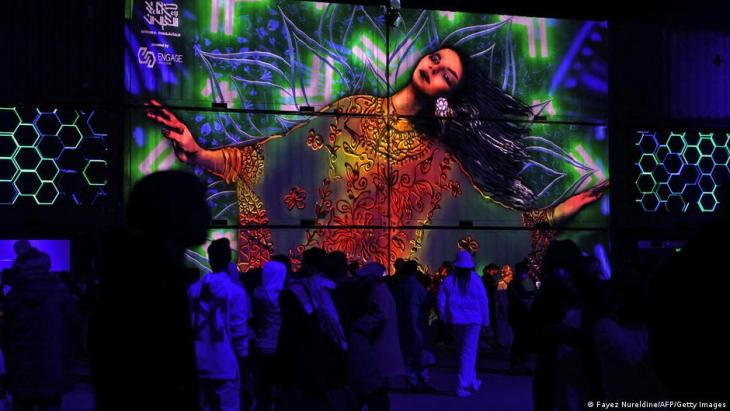 Wild parties and a freewheeling sex life are part of everyday life in many places in the world today. Saudi Arabia is not one of them. Discreetly, however, those who want to hook up and party under the radar have been networking there for a long time. Johannes Sedak went on a search for clues in Riyadh

Rami cruises through the night, his next cigarette at the ready. In his windscreen, the illuminated glass towers of Riyadh flash by. With his tattered jeans and black vest, you could just as easily meet him in Berlin or London, but the young artist has never left Saudi Arabia. His last relationship with another man was some time ago. But who knows who he will meet at the weekend? There is a techno party happening on Friday. Will there be alcohol and drugs? Highly likely.

Saudi Arabia is still considered one of the most conservative countries in the world – an absolute monarchy where religious policemen monitor good morals and strict Islamic law allows for the harshest punishments. As recently as March, 81 people were executed in a single day. Human rights activists report the torture of imprisoned dissidents. Those who bring alcohol, drugs or pornographic material into the country can face years behind bars. Same-sex sex is punishable by imprisonment, caning and, theoretically, death.

"How can you expect to dictate rules to this generation?"

Yet, something is moving beneath this dark veil of prohibition. Countless people in the country want to live out their sexuality freely and are networking in secret. At the same time, the news of wild parties has long since made its way from other countries, via the Internet or wealthy Saudis returning from stays in Europe or the USA. Previously, Western diplomats and certain sheikhs were considered the first port of call for alcohol-fuelled receptions and parties on well-guarded estates.

But now young Saudi Arabians also want to join in the celebrations: two-thirds of the population are younger than 35. "A lot of people here love techno. They love raves," Rami, not his real name, tells me over an iced coffee and his next cigarette. "Saudi Arabia is a big place and the Internet is all around." At secret parties, he says, people party just like anywhere else in the world – and consume the same things. Drugs like hashish or cocaine are expensive, but can be procured, say several people who know the scene. Customs are always uncovering stashes of illegal substances and bottles. "How can you expect to dictate rules to this generation?" asks Rami. "It's impossible." 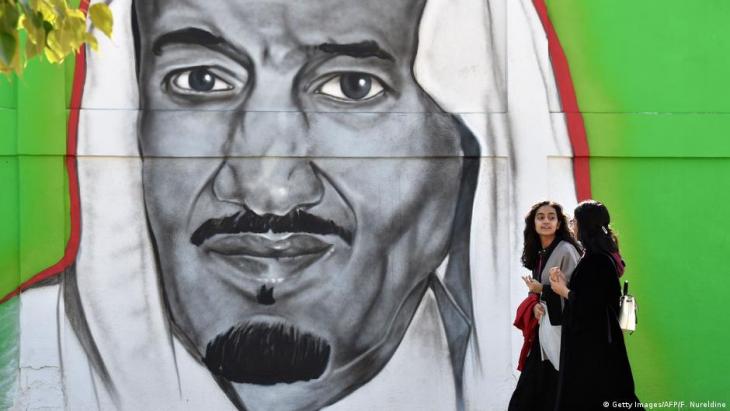 Between tradition and upheaval: the decrepit King Salman looks out from this poster, but Crown Prince Mohammed bin Salman has long held the reins of power. Desirous of leading Saudi Arabia into a modern future, he has allowed concerts and festivals in the country. Society has begun to open up, but constraints are still tight. Parallel to these official events, a secret party scene has grown up, where people of different sexual orientations meet to hook up and revel under the radar

Concerts with spectacular light shows and pyrotechnics have been around since a ban on concerts was overturned a few years ago and the strict separation of men and women was lifted. Since then, mixed audiences have partied and danced in front of Justin Bieber or star DJ David Guetta, and a festival called "Soundstorm" drew more than 700 000 people to the desert last winter.

The government of de facto ruler Crown Prince Mohammed bin Salman finances and supports these sometimes bombastic – alcohol-free – events, under the auspices of the "General Authority for Entertainment". The last "Soundstorm" edition set two Guinness World Records: for the highest stage (41 metres) and the show with the most LED lights (60 million). What was not allowed for decades is now apparently being made up for in superlatives.

But the colourful fun planned by the highest authorities has a bitter aftertaste. Critics see the events as attempts to cleanse the country's image on the back of art, music and hip youth culture using state money. According to the music magazine "Billboard", some musicians collected six times their regular fee to get the masses dancing at the "Soundstorm". Big money also brings big sport to the country: Formula 1, boxing, horse racing.

Parallel to the official events, an underground party scene has emerged. Organisers of these illegal parties at ever-changing locations cryptically call themselves "entertainment companies" or "sensory experiences". Entrance is granted by invitation only – or in exceptional cases, you may also get in if you answer a detailed questionnaire about your own party past and your circle of friends. Videos of these nights show outlines of people moving to beats in dark rooms and staggering figures at dawn.

Thanks to the Internet, those of Saudi Arabia's 34 million citizens who wish to lead a liberated sex life behind closed doors are also able to make contact. Homosexuals and other parts of the LGBTI community network in private groups on Instagram or Snapchat. Hardly surprising then that "Snap" – where chat messages self-delete after a short time – sees more traffic in Saudi Arabia than practically anywhere else.

People are now even using dating apps to chat and date, despite the risk of undercover investigators potentially breathing down their necks. One user, who says he is homosexual, writes that he has already downloaded one of the apps several times, but has always deleted it again. "Because I'm scared." Many users are "liars", others need money and prostitute themselves. "Get involved with just anybody and you take a huge risk. After all, you don't know who you’ll end up with next," he writes.

"All it takes is a kiss"

At a cafe known among the community as a meeting place for homosexuals, the mood is boisterous. There are frequent comings and goings while staff prepare cold drinks and cakes to the indie-pop blaring from behind the counter. On a paper napkin pinned to a noticeboard, someone has written: "All it takes is a kiss – fall in love with me", along with a Snapchat username. It is easy to forget here that a public kiss in Saudi Arabia can mean at least a fine and just a few tweets critical of the government can mean years in prison.

The most recent example: Salma al-Shehab. She was sentenced to 34 years in prison just a few weeks ago for following activists on Twitter and sharing with her modest following (2,500) phrases like: "I reject injustice and support the oppressed." According to the Saudi public prosecutor's office, this caused "social and state security" to falter. It is the harshest sentence ever imposed on an activist in the country.

In the cafe, there are card games and laughter until late in the evening. It is one of the now countless "com-areas" in the country, a place where men and women can hang out and sit together. And one where homosexuals can also find each other in a semi-public way. A Saudi in white Thawb garb, by his own admission looking for new male contacts, says while walking nearby: "Being friends without action is a bit boring sometimes."

"Our religion rules our country"

King Salman, the decrepit monarch, derives much of his legitimacy from being the "custodian of the two holy sites", that is, the places sacred to Muslims, Mecca and Medina. Sunni Islam, expressed in the puritanical and strictly conservative reading of Wahhabism, is the state religion. Homosexuality is "naturally" forbidden in Islam, says a devout father of four one afternoon over tea and dates. Anyone who has sex with someone of the same sex is considered "crazy" and "sick" here.

"Our religion rules our country," says Rami, now somewhat more relaxed. Many men now lead a "hard life" because they have decided to cross forbidden boundaries. Rami also describes himself as a believer. But in the end, he says, a man is judged by his "inner heart". "How I treat my mother, my father, the poor. Those are the few things that really count."

Perhaps the clearest sign of change is that the bearded religious policemen are slowly disappearing from public spaces. The "Committee for the Promotion of Virtue and Prevention of Vice", as the authority is officially called, has now lost most of its powers. The "Mutaua" is no longer allowed to arrest, prosecute or chase anyone to the mosque. Today, when the call to prayer comes through the loudspeakers, shoppers continue to browse in air-conditioned malls at Zara or Nike – unthinkable even ten years ago, when the morality supervisors patrolled with batons.

Despite all the relaxations, the country's leadership currently seems intent on averting a major breach of the dam: alcohol, probably the most popular intoxicant in the world. With the necessary small change, however, this actually forbidden commodity can be procured, even without contact to Western embassies. A bottle of good vodka, which costs 10 euros in German supermarkets, can cost 30 times as much on the black market, says a connoisseur who, like the other interviewees in this text, wishes to remain anonymous for his own protection.

The drink menus of some lounges have long given the impression of a pseudo-alcoholised society that imitates real consumption with zero alcohol. In "Twilight" in Jeddah, mojitos, Sun on the Beach and an imitation of Scottish whisky are on the menu – all alcohol-free – as well as "German draught beer" and Chardonnay, marked with the suffix "0.0". For brunch, people in Riyadh restaurants also order "Saudi Champagne", a sparkling fruit punch made of apple and lemon juice with mineral water.

The Internet has also opened the floodgates a little wider for alcohol, which in other countries is a social glue across age groups and social classes. In forums and on YouTube, expats exchange recipes for making schnapps or even wine at home in plastic canisters. Essential ingredients: grape juice, sugar, yeast and a little patience. In more analogue times, "The Blue Flame", a pamphlet on distilling alcohol, did the rounds.

A wealthy Saudi from Riyadh's northwest has her own method. She decants her red wine – with ice cubes – into a flask when going out. "Jesus blood," she says on her way to an art exhibition, offering a sip from her drinking bottle. The ice cubes tinkle. By the time she joins the driver in her gold-coloured SUV on this evening in July, the city glowing like an oven, she is already buzzing.

Like Christianity, Europe's history is one of migration. Both have strong roots in the Orient and in cultures thousands of years old. Cultural historian Bernhard Braun invites us ... END_OF_DOCUMENT_TOKEN_TO_BE_REPLACED

Russia is leaving no stone unturned in its attempts to make the Islamic Republic an ally in the war against Ukraine. Fortunately for Vladimir Putin, the mullahs in Tehran are ... END_OF_DOCUMENT_TOKEN_TO_BE_REPLACED

No country in the Islamic world is influenced as strongly by the traditions of Sufi culture as Pakistan. Yet the Sufis there have been under attack from Islamic hardliners for ... END_OF_DOCUMENT_TOKEN_TO_BE_REPLACED

The ruling is part of an ongoing clampdown on dissent and minorities in the kingdom. But so far, it's unlikely to have an effect on the kingdom's newly polished image as a global ... END_OF_DOCUMENT_TOKEN_TO_BE_REPLACED

Plans for Neom, the futuristic ecocity in Saudi Arabia's desert, are taking shape. In the form of a straight line, for nine million inhabitants. Merely a pipe-dream? Commentary by ... END_OF_DOCUMENT_TOKEN_TO_BE_REPLACED
Author:
Johannes Sadek
Date:
Mail:
Send via mail

END_OF_DOCUMENT_TOKEN_TO_BE_REPLACED
Social media
and networks
Subscribe to our
newsletter