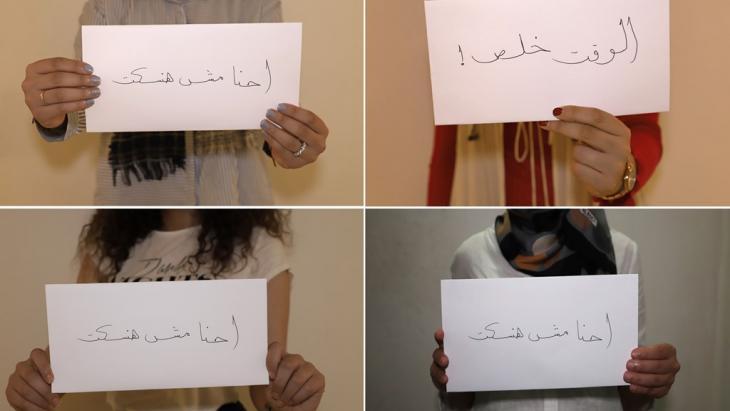 Sexual violence in Egypt
Battling against a culture of silence

Two prominent cases concerning gender-based violence – that of Ahmed Zaki, who has been accused by more than 100 women of extortion, sexual harassment, coercion and rape, and that of the gang rape at the Fairmont Hotel in 2014 – have given rise to a new movement fighting sexual violence in Egypt. Paula Al-Bahari has the details

"He grabbed my hair and threw me on the floor. He unbuttoned my pants [...] I tried to scream, but nothing came out. When he took what he wanted, I saw blood on my clothes. I panicked and all he had to say was 'Go to your uncle now, slut! You're not different than the other girls.' I left and I called my mom, I told her everything. She didn't do anything."

This is the testimony of one of the victims of 22-year-old student Ahmed Bassam Zaki. When the incident occurred, she was 19 years old. After the rape, Zaki tried to blackmail her, threatening to tell her family everything if she refused to have sex with him. Her mother reacted by taking away her mobile phone and laptop and forcing her to delete all her social media accounts and go abroad. But the family took no action at all against Zaki, her rapist and blackmailer.

Responding to a sex crime by laying full blame on the victim, who is thus doubly punished, is not the exception in Egypt but the rule. The perpetrators, by contrast, usually go unpunished.

Unlike the young woman in this case, most victims of sexual violence do not even tell their families what happened for fear of being blamed and shamed. As demonstrated by numerous statements by Egyptian women on social media, those who do talk about their experience are usually met with disbelief or are accused of bringing it on themselves. Why is that so? And why are the perpetrators able to continue to commit crimes with impunity?

The role of the family

The family is the decisive factor in the socialisation of any young person and is formative throughout our lives. In Egypt, the family is still the bedrock of the community and can in most cases be considered a mirror of society.

This is already evident in how children are raised. For the most part, girls and boys continue to receive a gender-specific upbringing, with girls being taught domestic skills and to be reserved, and boys encouraged to be strong and tough. Identical behaviour and traits are evaluated and judged differently depending on gender. A man is still expected to support his family while his wife takes charge of the household and children. Only in these roles can they expect to be accepted and recognised by society.

"Our society has to change its thinking. We need gender equality. We need parents to stop raising their children differently just because of their sex," says the Egyptian YouTuber and activist Sherine Arafa. She identifies gender inequality as one of the main reasons why sexual violence so often goes unpunished in Egypt.

In the 2017 IMAGES survey, many of the male respondents said they felt superior and believed that they were entitled to guard and control their female family members. Women, on the other hand, are more open to change than their male peers and are in favour of gender equality.

Arafa, who herself has a son, calls in particular for changes in how boys are brought up. Above all, she says, society must stop instilling in boys a feeling of superiority and power. Instead they should "respect girls and learn boundaries".

She also views it as problematic that boys are taught not to show any emotions. "Vulnerability, expressing one's feelings, is regarded as weakness. When the boys get older, these suppressed feelings turn into aggression," she says.

Finger pointing and the culture of silence

Families still place great value on their reputation, in particular that of their female members. A woman is kept under close watch in everything she does, how she dresses, with whom she is seen – not only by her own family but by society as a whole. When women are victims of sexual assault, the first questions are always: what were you wearing and what were you doing there? From the outset, therefore, the implication is that she was at fault. As can be seen from the many statements girls and women have made on social media, there is no right answer to these questions. No matter what the woman says, it is considered her fault.

It has long been proven that how a woman dresses does not make any difference as to whether she becomes a victim of sexual violence. Factors such as opportunity and the perpetrator's motivation are much more decisive in the choice of victim. Nevertheless, the notion that the woman always provokes such assaults seems to be firmly anchored in how society thinks. 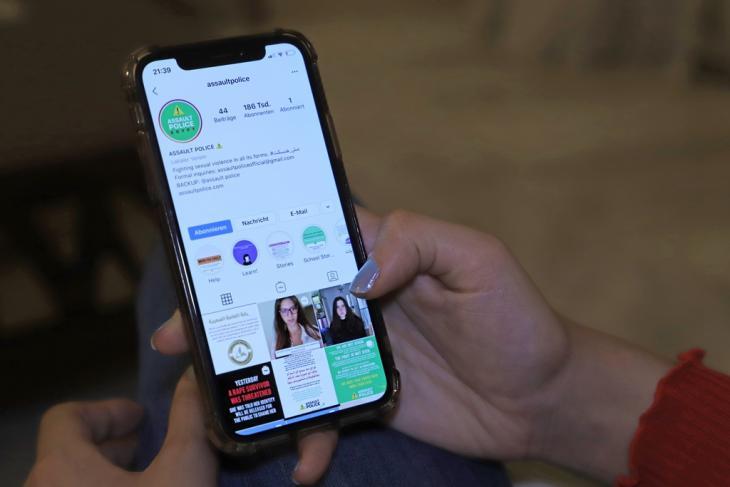 Fighting sexism and violence against women: activist Nadeen Ashraf has launched a new women’s rights movement in Egypt. Reports by victims of sexual violence are posted on the Assault Police Instagram account. Dozens of other accounts fighting gender-based violence and seeking to change attitudes have gone online in Egypt in recent times

These structures are also perpetuated by women themselves, who are just as likely to blame the victim and even go so far as to defend convicted perpetrators. Arafa cites upbringing as the real culprit here as well: "This is the way we were raised. Women believe that anything a man does is the right thing. Society must not judge him."

Mozn Hassan, a human rights activist and director of the NGO Nazra for Feminist Studies, cites social categorisation into good and bad women as one of the main reasons for violence against women, describing the mind-set as follows: "There are good women, who deserve our protection, though not their rights, and there are bad women, who do not."

Sex offenders like Zaki take advantage of this mentality. They know that even if a victim is believed, her reputation is at stake, as she is always perceived as having acted provocatively. Many women therefore prefer to remain silent or even let themselves be blackmailed into sexual acts, as long as no one finds out about their "shame". The motivation of protecting one's own reputation or that of a female family member at all costs is one explanation why sex crimes are often not reported. Another is the Egyptian justice system.

Laws do not necessarily mean justice

Rape is a punishable offence under Article 267 of the Penal Code, but rape within marriage is excluded. Furthermore, an assault is only considered rape when full penetration has taken place; otherwise the act is downgraded to sexual assault. The punishment in the event of a guilty verdict is life imprisonment or the death penalty.

In 2014, sexual harassment was made a criminal offence in Egypt. Under the law, sexual harassment is punishable by imprisonment for between six months and five years and fines up to 50,000 Egyptian pounds. However, there are still no laws protecting victims from intimidation and assault.

It was not until July this year that a law was passed to protect the identity of the victim. It came about as a result of pressure by activists Sabah Khodir and Nadeen Ashraf (Instagram account Assaultpolice) surrounding the Zaki case. Before then, the authorities regularly disclosed the identity of the victim without her consent, even handing over her contact details and address to the family of the accused. This often led to daily calls from the offender's family, who would plead with the victim to withdraw the charges, and in some cases even to threats, stalking and violent assaults.

Although the new law certainly represents progress, activists like Arafa and Hassan do not deem it sufficient. "We need not only a law preventing the women's names from being revealed but also one that protects them when they are threatened," says Arafa, who goes on to say that the length of the prison sentences also has to change. Hassan brings up another point: "We need a comprehensive law that deals with violence against women in both the public and private realm. Do not consider the public sphere from the viewpoint of the private one and the private sphere in terms of the public arena."

In addition to having to deal with the usual apportionment of blame, questions and derisive comments from police officers, victims report that the majority of officers try to dissuade them from reporting sexual assaults.

The first step in solving a problem is to name it. "People keep talking about sex crimes as if they were something completely new in Egypt. But that is not the case. These crimes continue to happen because people refuse to admit that this is a recurring problem in this country and in this society for many different reasons," says Mozn Hassan. She therefore calls for a public debate that would offer feminist and pro-gender approaches space in mainstream media and allow these groups to discuss the issues without being stigmatised.

Gender-based violence in schools and within families must also be discussed openly. For Sherine Arafa, who together with activist Nadeen Ashraf recently launched an initiative for education about sexual violence in schools, one thing is certain: "We should not be brought up to be silent. Those days are over."

Home
Print
Newsletter
More on this topic
RLA winner Mozn Hassan on civil repression in Egypt: ″Now′s the time to be creative″Mona Eltahawy: "Why do you hate us so?" – The Middle East needs a sexual revolutionSocietal repression in Egypt: The tentacles of autocracy
Related Topics
Gender, Muslim women, Sexism and violence against women, Women in the Islamic world
All Topics

Welcome to the world of Al Qasar, where Arabic music collides head-on with punk and psychedelic to create something powerful and beautiful. "Who Are We" is a raucous, subversive ... END_OF_DOCUMENT_TOKEN_TO_BE_REPLACED

Egyptian authorities have Mada Masr in their sights once again after critical reporting. But the editor of the country's last independent news source is adamant they will continue ... END_OF_DOCUMENT_TOKEN_TO_BE_REPLACED

Like Christianity, Europe's history is one of migration. Both have strong roots in the Orient and in cultures thousands of years old. Cultural historian Bernhard Braun invites us ... END_OF_DOCUMENT_TOKEN_TO_BE_REPLACED

When she ascended the throne, millions of Muslims still lived under British rule. Later, Elizabeth II appealed for tolerance in a multi-religious society. She was the first ... END_OF_DOCUMENT_TOKEN_TO_BE_REPLACED

END_OF_DOCUMENT_TOKEN_TO_BE_REPLACED
Social media
and networks
Subscribe to our
newsletter