The actress was considered single and lived in a flat in Tehran's Gholhak district. The person who found her body was her "husband", said Tehran judge Mohammad Reza Sahebjomei, who is leading the investigation with his team. The "husband" told the judge that his wife had been living alone in the flat: "I saw her two days ago, she seemed the same as usual. Yesterday we spoke on the phone and talked about everyday things." He describes the relationship as good. The "husband" was worried because Zohreh's mother had told him on the phone that she was not answering the phone. Zohreh had called her mother in the afternoon; she had seemed sad and was crying,  the "husband" quoted the mother as saying.

The previous evening, Zohreh Fakoor-Saboor had posted a TV interview of herself on Instagram. In it, she told the presenter that she regretted becoming an actress. If she had had children, she would have forbidden them to become actors. Had she been as smart as she is now, she would have got married and raised a family. No one investigating Fakoor-Saboor's mysterious death could find out – or would reveal – whether she was actually married, and who her husband was. The only concrete clue came from Justice Sahebjomei, whom the Young Reporters' Club quoted as saying that enquiries had revealed that the person who found her body was a film and television producer. The deceased was his second wife. This information went uncommented by the relatives.

A presenter at Fakoor-Saboor's funeral, which was attended by hundreds of celebrities, said: "Only God is all-knowing. All we know is that she had a lot to say that went unsaid. Words can kill a person." He asked the people present not to judge others. The 53-year-old film and television producer Mehran Maham, a long-time colleague with whom she had worked for nearly a quarter of a century on more than 20 TV series and film projects, was seen at her graveside shedding loud and bitter tears.

The producer was traded directly and indirectly as Zohreh's husband by a handful of domestic and international media outlets. A lot of unanswered questions remain. If Zohreh was indeed someone's first, or even or second wife, it makes no sense that he did not have a key to the flat and that the caretaker had to turn up to let him in.

Rule to date: the woman is to blame

Until now, the rule in Iran has been: if a woman is sexually harassed or assaulted, she is to blame. Probably her hijab was too loose, her headscarf too thin, her coat too short or she was joking and laughing in the street.

Now Iran's most popular actresses and directors are speaking out, those who keep millions of people company night after night while they eat or drink tea. Since food prices have risen, since COVID-19 kicked off, not even the Iranian middle class can afford to invite friends and relatives over. For many, there is not even enough money to buy fruit and snacks for guests.

Increasingly, it is the actors who "visit" as virtual guests, in lavishly produced series with superstars and special effects, or in feature films that may have previously been shown at the Berlinale, Cannes, Locarno or Venice; with female artists who have received international awards and show the world a positive side of Iran. Their photos on the red carpets can be seen in European glossy magazines; they are the peace ambassadors of the people, unlike the grim men with beards who represent power and the military. 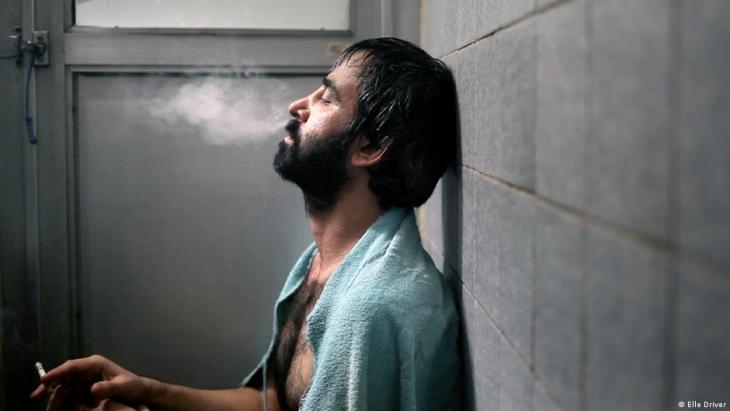 Ambassadors of freedom. men and women, directors and screenwriters, use the content of their films to campaign for freedom, change, and the abolition of Iran's strict regime of social regulation. Like Mohammad Rasoulof – here a still from his film "Manuscripts don't burn" – whose films have earned awards in Cannes and Berlin. Filmmakers win over people's hearts in Iran like football stars do in some European countries. The actors are more important to the audience than directors, whose names only appear for a few seconds in the opening or closing credits of their films

Many of them – with their attire, red lipstick and hair peeking out from under a hat or narrow scarf – subtly rebel against the rules, taking a stand for freedoms. Men and women, directors and screenwriters, use the content of their films to campaign for freedom, change, and the abolition of Iran's strict regime of social regulation. Both Mohammad Rasoulof and Jafar Panahi, whose films have earned awards in Cannes and Berlin, were unable to attend the awards ceremonies in person, either because of prison sentences or bans on leaving the country. In short, filmmakers win over people's hearts in Iran like football stars do in some European countries. The actors are more important to the audience than directors, whose names only appear for a few seconds in the opening or closing credits of their films. This is especially true if they are beautiful and smart.

Spineless proposal by the "House of Cinema"

The HoC's statement reads, among other things: "We condemn violence that may be perpetrated, especially of a sexual nature, in all its manifestations," and further: "The HoC considers it its elementary duty under its statutes and powers to take responsibility for this, and condemns any act that violates the cultural etiquette and professional ethics of people working in cinema." He said the HoC would "of course" take all necessary measures.

To this end, he said, a committee would be set up consisting of the chairman of the board and the chairman of the Supreme Arbitration Council of the HoC, plus three trusted figures in Iranian cinema to be elected by the general assembly of the HoC, a representative of the Ministry of Culture and Islamic Guidance, and a lawyer. The commission would deal with complaints, taking into account ethical principles such as confidentiality, providing those affected with the necessary legal advice to take their grievances to court if necessary.

Signatories to the declaration are demanding that the competences of the commission members in dealing with sexual harassment must be "demonstrable, effective and measurable". The members must also receive appropriate training. In addition, the committee should be democratically elected, women must hold the absolute majority and the committee itself must be "accessible to all women in the film industry".

The HoC's proposals, however, are at odds with every one of these points. The contributors occupy management positions and have so far tried to stifle the issues brought by the women behind closed doors. The signatories complain that the body is employing the same old inefficient methods, which was one of the things they were hoping to change with their declaration in the first place.

Home
Print
Newsletter
More on this topic
″Love, sex, death and the search for truth in Tehran″: Where nothing is allowed, yet anything is possibleWinner of the Berlinale 2020: "Sheytan Vojud Nadarad": There is no evil, unless it's perpetratedQantara dossier: Iranian cinema
Related Topics
Cinema, Diversity, Gender, Iranian cinema, Iranian clerics, Media in Iran, Racism | discrimination, Sexism and violence against women, Social movements
All Topics

Drought and upstream water diversions have seen the Zayandeh Rood, "fertile river" in Persian, run dry since 2000, with only rare exceptions. The famed river bridges of the ... END_OF_DOCUMENT_TOKEN_TO_BE_REPLACED

Since the government cut subsidies for food, prices in Iran have skyrocketed. Protests that broke out in Khuzestan province are now spreading across the Islamic Republic. By ... END_OF_DOCUMENT_TOKEN_TO_BE_REPLACED

Very different Western reactions to the suffering in Ukraine and the Arab world show that there is a profound rift among cultures. Essay by Michael Young END_OF_DOCUMENT_TOKEN_TO_BE_REPLACED

United Arab Emirates strongman Sheikh Mohammed bin Zayed al-Nahyan, who was formally elected president on 14 May, has led a realignment of the Middle East, creating a new anti- ... END_OF_DOCUMENT_TOKEN_TO_BE_REPLACED

Russia's ranking on the World Press Freedom Index has fallen again over the Kremlin's wartime censorship of the Ukraine conflict. From Myanmar to Mexico, journalists continue to ... END_OF_DOCUMENT_TOKEN_TO_BE_REPLACED
Author:
Nasrin Bassiri
Date:
Mail:
Send via mail

END_OF_DOCUMENT_TOKEN_TO_BE_REPLACED
Social media
and networks
Subscribe to our
newsletter