Skip to main content
Sexuality and Sex Education in Iran

No Longer a Taboo

For some time now, sex education classes have been part of the national birth control programme in the Islamic Republic of Iran. They are seen as part of the effort to limit the country's population explosion. Roshanak Zangeneh visited a course for young adults in Teheran 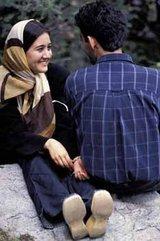 For the last twelve years, sex education classes have been compulsory for couples in Iran, but there is still considerable resistance from religiously traditionalist families

​​It's early in the morning. Young couples come one after another into the waiting room, and engage in whispered conversations. The teacher, wearing a white gown and a black headscarf, announces the start of the lesson. The couples separate - there are separate classes for men and women.

It has been a legal requirement in Iran for the last twelve years that couples intending to marry must attend sex education classes. The classes last over an hour. In the first half-hour, the students watch a film dealing with the sexual needs of men and women, telling them how to stimulate their partners, and explaining to them about the erogenous zones of men and women.

In almost all Muslim countries, it's taboo to talk openly about sex. But young people, like the 25-year-old mathematics student Maryam, are pleased that sex is a topic in these classes:

"Because people are so ashamed in our society," she says, "we think it's sinful or disgraceful to about such things, but in the class we are told that it shouldn't be like that, and that we can talk about them in a relaxed and calm way."

Especially among traditional families, it is customary that women remain virgins until their wedding night. As a result, many women are worried as the approach their wedding. They have mixed feelings, wavering between reserve and fear.

That is one of the topics in the sex education classes. Dr Aminian takes the class for bridegrooms, and offers advice on sexual matters - if it's requested, in private. He recommends to them that they should wait before they have sex for the first time until both partners are mentally and physically ready for it. He says the first sexual contact has a long-term effect, especially on women.

Lack of information and family resistance

"If, for example, a couple is suffering from stress, or is physically tired, or one of the partners really doesn't feel like having sex, then they shouldn't force it, just because it's the wedding night," he says. "We even tell the couples that it can take two or three weeks before the situation is right to have sex for the first time."

Iranian women, especially those who come from very religious families, are mostly not adequately informed about sex. That's the case for the 20-year-old sociology student Sohreh. She's about to marry her fiancé, whom she met for the first time in the mosque six months ago.

Sohreh is surprised to find out in the class how little she knows, not just about sex, but also about her own body. "I felt ashamed," she says, "that I'm twenty years old but I still know nothing about sex. I ask myself why I've never read any books about it. Before I watched this film, I thought that an orgasm was something only men have. I didn't know that women could have such a feeling."

The classes are offered across the country in about 5,000 health centres, but content is dependent on the cultural characteristics of the different regions of the country. One problem is that it's out of the question for many traditional families to let their daughters learn about their sexual needs, or even about contraception, before their wedding.

In some cases, families will not allow the young bride to go to the compulsory class on her own. She'll be accompanied by her mother or her mother-in-law. Mrs Zargar, a teacher and sexual counsellor in Teheran, says that many traditional families have simply the wrong attitude to marriage.

"We talk to the families," she says, "and try to explain to them that their daughter will soon be a woman, and that we have to prepare her for this and inform her about it. We tell them that they shouldn't try to convince their daughters to get pregnant as soon as they are married. If we can't change such attitudes in the mothers, the daughters can't change anything either."

Strategies to lower the birth-rate

The sex education classes are part of the government's family planning programme, and the couples are also informed during the classes about methods of contraception.

Iran has one of the highest rates of contraception of any Muslim country: 73% of Iranian women of childbearing age use contraception. Last year, many men had themselves sterilised in one of more than 400 state and private clinics. Dr Aminian himself has carried out 170 such sterilisations. It's much easier to sterilise a man than a woman, he says.

At the end of the class, each couple gets a certificate. Mrs Zargar says you can tell how successful the classes are by the reduction in the birth-rate. In the last fourteen years it has dropped from 3.4% to 1.2%. Another reason for the success is that many couples come back after their wedding for individual counselling.

Family Planning Muslim Style
Tightrope Walk between Pragmatism and Morality
In spite of the rigid morality of the ruling clerics, Iran has set up effective programmes for sexual education and family planning. But the programmes are entirely dependent on the state. Cyrus Schayegh reports

AIDS
Dubious Education
AIDS has long ceased being a taboo topic in Iran. The state has made efforts to bring the problem under control. However, official statements and social reality are still worlds apart. Shahram Ahadi reports

AIDS in the Arab World
Turning a Blind Eye
Even though an estimated 500,000 to 1 million people in the Arab world are infected with AIDS, the problem is still being marginalised. Alfred Hackensberger spoke to Elie Aaraj about opportunities for spreading awareness and prevention

END_OF_DOCUMENT_TOKEN_TO_BE_REPLACED
Social media
and networks
Subscribe to our
newsletter