"Shah 'Abbas: The Remaking of Iran"
Persian History in the Maelstrom of World Politics

The exhibition Shah 'Abbas: The Remaking of Iran, running at the British Museum until 14 June, is a magnificent display of the cultural, architectural and artistic flowering seen in the reign of the fifth Safavid Shah who ruled from 1587 to 1629. By Susannah Tarbush 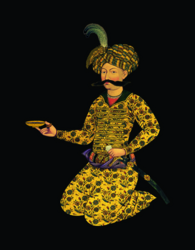 ​​ The exhibition comes at a time when the 30th anniversary of the Iranian revolution and the 20th anniversary of Ayatollah Khomeini's fatwa against Salman Rushdie have reawakened conflicting views and memories in Britain. It is claimed by some that the exhibition will increase understanding of Iran today, and perhaps partly help explain in historical terms its pride, prickliness and ambition.

Shah 'Abbas transformed Iran's social, economic and religious landscape. He revitalised Shii Islam as the state religion, and initiated a golden age of Iranian art. His craftsmen and artists were inspired to create a unified style which was manifested across the spectrum of artistic creation, from mosques and shrines to tiles and wall decoration, carpets, textiles and the production of manuscripts and books.

The gilded youth of Isfahan

Even the appearance of fashionable people changed, with big almond-shaped eyes and bee-stung red lips coming into vogue. "The fact that a new fashion swept Isfahan after Shah 'Abbas and his court settled there is hardly surprising," says the exhibition catalogue. "To this day people emulate trendsetters and the gilded youth of Isfahan were no exception."

Interior of the dome of Isfahan's Shaykh Lutfallah Mosque: Shah Abbas moved the empire's capital from Qazvin to Isfahan, where he launched an ambitious construction programme

​​ Shiism had been declared as the state religion in 1501 by the first Safavid ruler, Shah Ismail I, but it was Shah 'Abbas who consolidated its pre-eminence. The exhibition, inside the British Museum's famous dome-roofed circular reading room, focuses on four key sacred cities: Isfahan, Mashhad, Ardabil and Qum.

One of the world's most beautiful cities 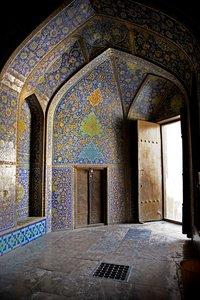 The entrance corridor of Shaykh Lutfallah Mosque, Isfahan: It was built in 1615 and is one of the architectural masterpieces of Safavid architecture

​​ Shah Abbas moved Iran's capital in 1598 from Qazvin to Isfahan, where he launched an ambitious construction programme. Around the great square, Maidan Naqsh-i Jahan, were built his royal palace, the personal mosque named after his father-in-law and spiritual advisor Shaykh Lutfallah, and a luxury goods bazaar. Isfahan remains one of the world's most beautiful cities.

The exhibition has been mounted in association with the Iran Heritage Foundation, in partnership with the National Museum of Iran and the Iranian Cultural Heritage, Tourism and Handicrafts Organisation. Objects have been brought from eight museums in Iran, and from collections and institutions in the UK, US, Kuwait, Germany, Russia, Italy, Switzerland and France.

The high degree of cooperation between Iranian and British cultural experts is impressive given that relations between Britain and Iran have areas of tension. In mid-March British Prime Minister Gordon Brown said that Iran could get UN-supervised international help to develop a purely civilian nuclear power programme, but warned that its current nuclear programme is unacceptable and that if Iran continues with it, sanctions will be toughened.

​​There are additional sources of friction. The launch of BBC Persian TV in London in January this year was denounced by the Iranian regime as "suspicious and illegal" and as working against the interests of Iran.

At the end of January the British Council closed its offices in Tehran and stopped its work in Iran after its staff were intimidated and harassed by the Iranian government. In December all 16 members of the local staff had been summoned to Iranian President Mahmoud Ahmadinejad's offices and ordered to resign.

But the Justice Secretary and former foreign secretary Jack Straw adopted a warmly positive tone when he opened the exhibition. He said: "The more we understand of Iran, the better it will be for the West's relations with the country and the better we understand ourselves and our shared history."

An admission of guilt

"Hardly a balanced and reciprocal relationship": Iran's democratically elected prime minister, Mohammed Mosaddeq, was removed from power by the British and U.S. governments

​​Referring to historical relations, Straw admitted that his country's relationship with Iran was "hardly a balanced and reciprocal one." He gave some examples:

"There was the tobacco monopoly in the 19th century, the oil deal and the British occupation of Iran jointly with the Soviet Union for five years between 1941 and 1946. Our direct involvement with the United States in the removal of the democratically-elected prime minister Mosaddeq was another example. So was our continued and apologetic support for the Shah long after he lost the consent of the Iranian people."

Shah Abbas and Elizabeth I

The British Museum's director Neil MacGregor, in his foreword to the 274-page exhibition catalogue, compares Shah 'Abbas with his contemporary, Queen Elizabeth I of England. Like Elizabeth I, Shah 'Abbas inherited in difficult circumstances an unstable country that had recently redefined its religion and was surrounded and threatened by powerful enemies. 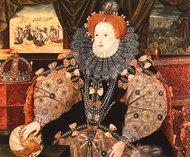 A historical parallel: Both Shah 'Abbas and his contemporary Queen Elizabeth were able to create a compelling sense of a distinctive national identity

​​Both monarchs were able to create a compelling sense of a distinctive national identity, but unlike Elizabeth's England, Shah Abbas's Iran accommodated other faiths, notably the Christian Armenians.

Shah 'Abbas, like Elizabeth, fought off foreign invasion and presided over a series of critical military victories and a huge expansion of international trade. But while Elizabeth's England was "on the edge of the world she had to address, Iran was at its centre. Shah 'Abbas made his capital at Isfahan a crossroad, a crucible of international culture and commerce. Paintings on his palace wall show Turks and Chinese, Indians and Europeans: it is hard to imagine any other city of the time where they could have met and mingled with such ease." 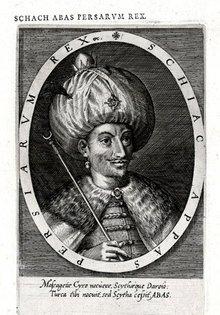 This print from the Atrium Heroicum, Augsburg, Germany, shows that by 1602, 15 years into his reign, Shah 'Abbas was well-known enough in Europe to be included in a series of prints depicting 'heroes'

​​MacGregor notes that it was during the reign of Shah 'Abbas that Persia fully entered European consciousness, as trade, diplomacy and military expansion multiplied the contacts between Isfahan and European capitals. "Ever since, it has been of the greatest importance to Europeans to study and understand the history and culture of Iran. This exhibition will, we hope, contribute to that process."

The exhibition pays attention to the Armenian Christian community, which was particularly important in the silk business that was such an important component of Persia's trade with the outside world. In 1604 Shah 'Abbas forcibly relocated the population of the Armenian city of Julfa to an area of Isfahan which became known as New Julfa. Several Armenian religious objects are on display in the exhibition, including a silver and silver gilt crucifix of 1575. 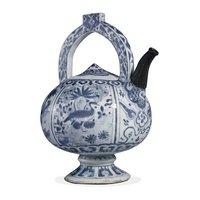 ​​He was a man of some piety, making a barefoot pilgrimage from Isfahan to Mashhad – a distance of nearly 1,000 kilometers – after he reclaimed Mashhad in 1598 when the Safavids defeated the Uzbeks. The great religious significance of Mashhad lies in its being the burial site of Imam Reza, the only Shi'i imam to be buried within Iran.

But the Shah had a cruel side. He had two of his five sons blinded, and in 1615 he arranged the assassination of his eldest son and heir-apparent Muhammad Baqir Mirza whom he mistakenly suspected of plotting against him.

A PR exercise for the Islamic Republic of Iran?

Alongside the festival, the British Museum is providing a busy programme which is in effect an Iranian cultural festival. There are films, lectures, debates, conferences, gallery talks and family days. The museum is also exhibiting a recently-acquired work, entitled Takhti, by the contemporary Iranian artist Khosrow Hassanzadeh. Like many Iranian artists, Hassanzadeh is inspired by his Iranian heritage.

Not all visitors to the exhibition have been happy with the experience. The comedian Shappi Khorsandi, who was born in Iran but grew up in the UK, complained on BBC TV's Newsnight Review: "It did feel like a big PR exercise for the Islamic Republic of Iran."

But any major exhibition on a nation's culture held in a prime cultural institution in another country is almost bound to be seen as having a promotional angle to some extent. Shah Abbas's achievements cannot be denied, and it would not be surprising if the exhibition encourages more people to travel to Iran to see the examples of its extraordinary cultural legacy and to meet Iranians for themselves.

Susannah Tarbush is a London-based British freelance journalist specialising in the Middle East who currently writes for Al-Hayat, Saudi Gazette and Banipal magazine.

END_OF_DOCUMENT_TOKEN_TO_BE_REPLACED
Social media
and networks
Subscribe to our
newsletter