In his book "Nehru: The Invention of India", Shashi Tharoor, who has worked at the UN in New York since 1978 and was tipped as a possible successor to UN General Secretary Kofi Annan, goes in search of India's first prime minister. By Gerhard Klas 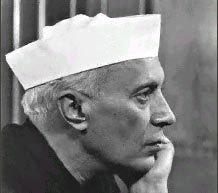 ​​Nehru, the first prime minister of India, like Mahatma Gandhi, is indelibly linked with India's national independence movement. After independence and partition of the former British colony in 1947, the avowed agnostic became witness to the most violent confrontations between Hindus and Muslims ever seen in the subcontinent.

Muslims fled from India to Pakistan, Hindus and Sikhs in the opposite direction. In the name of religion they engaged in mutual atrocities, of murder, rape and house-burning.

India today is home to around 130 million Muslims. In the light of renewed tensions between religions and castes in India at the opening of the 21st century, Shashi Tharoor chooses to emphasise the secular legacy of Nehru, a man whose tireless struggle to attain a secular India attracted conflict from the outset.

Though the Congress Party had succeeded in uniting Hindus, Muslims and Sikhs in the independence struggle during the early years, by the 1920's the first rents in this fabric of togetherness were beginning to show. And, as Shashi Tharoor rightly points out, this was also in no small measure attributable to the "divide and rule" policy of the British.

As greatest of Nehru's qualities, Tharoor identifies the fact that, as president, he remained true to his democratic principles. It was Nehru who, together with Yugoslavia's President Tito and Egyptian premier Nasser, formed the Non-Aligned Movement, bringing together nations with a neutral position on the East-West conflict and a wish to propagate a policy of disarmament.

Nehru was critical of the Soviet Union's putting down of the Hungarian Revolution of 1956, just as he was of Western Imperialism's suppression of anti-colonial independence struggles in the Third World.

Tharoor, however, sees an imbalance in Nehru's foreign policy. "His foreign policy declarations took the form of extremely moralistic, conscientious commentaries on international politics, something rather more suited to a liberation movement than to the governing of a country," opines Tharoor.

​​It's true that Nehru did not have a very high opinion of "power politics". As Nasser once observed, for Nehru, world politics were to be seen in the context of the interests of humanity as a whole. Tharoor regrets the fact that "this attitude contributed but little to the promotion of good bilateral relations with other countries that could have been of use to India."

The author is even more critical of Nehru's inclination for socialistically-oriented economic policies. For Tharoor, the first Indian prime minister's rejection of foreign investors is explicable in terms of what were then all too recent recollections of British colonialism. [During the final years of World War II, the British war economy swallowed up tremendous numbers of resources in India. One result being the famine of 1943 that in Bengal alone, cost the lives of more than 3 million Indians.]

Nevertheless, he feels, Nehru was wrong in believing that economic independence and self-sufficiency are necessary bedfellows of political independence.

On the other hand, Tharoor sees the economic growth that came with the market liberalisation of the early 90's as ushering in a liberalisation of society too and thus a softening of attitudes to caste and religion.

However there is an alternative reading of events in India. Generally put forward by critics of the neo-liberal economic policies, it's one that the aspirant to the highest job in the UN fails even to mention. According to this, the most recent tensions between castes and religions are signs of an intensified struggle for survival.

Class rather than religious affiliation

Since India opened itself up to free-market economic competition, the argument goes, the gulf between rich and poor has also grown. "The high-tech boom is creating a great deal of wealth in India today. At the same time, however, 400 million people do not have enough to eat," says Jean Ziegler, for example, the UN Special Rapporteur on the Right to Food, and a colleague of Tharoor's.

Nehru described the religious conflicts that preceded Indian independence as a "smokescreen for substantial economic interests." Other Nehru biographers such as Tariq Ali, point out that the Congress Party was not sufficiently active in following up on Nehru’s secularising efforts to prevent the eventual break-up of the subcontinent.

Nehru was convinced that interests should be defined according to class rather than religious affiliation. It's a part of the Nehru legacy that Shashi Tharoor would surely not agree with.

India and Pakistan after the Mumbai Blasts
Walking the Tightrope
The foreign secretary level talks between India and Pakistan, scheduled for July 20, were scrapped, at least for the time being. That does not mean that the peace process has reached the end of its tether, but it certainly needs a somewhat broader foundation, in the opinion of Thomas Bärthlein

END_OF_DOCUMENT_TOKEN_TO_BE_REPLACED
Social media
and networks
Subscribe to our
newsletter