As time went on, those against Muhammad became less unified in their opposition towards him – they were at a loss to know how to deal with him. Finally, the group was allowed to leave the valley. As the blockade was lifted, the triumphal procession of the new religion began, and the rest is history.

God is with the patient

Having related this legend, Nasrallah cited in his speech the Koranic verse that Muhammad is said to have received on the occasion of this three-year siege:

"O believers, strive for patience, perform the prayer, God is with the patient"

In other words, victory is certain, but triumph requires perseverance: therefore be patient as the beloved Prophet once was.

Nasrallah's speech is in truth an about-face. He sees the "axis of resistance" in a state of siege, and he advises patience. This also applies to his followers in Germany.

For the first time in its existence, Hezbollah cancelled the so-called Al-Quds demonstrations this year. Not only in Lebanon, but worldwide, no marches against Israel should take place on this last Friday of the month of Ramadan - not even in Berlin.

An escalation with Germany would obviously be inopportune. 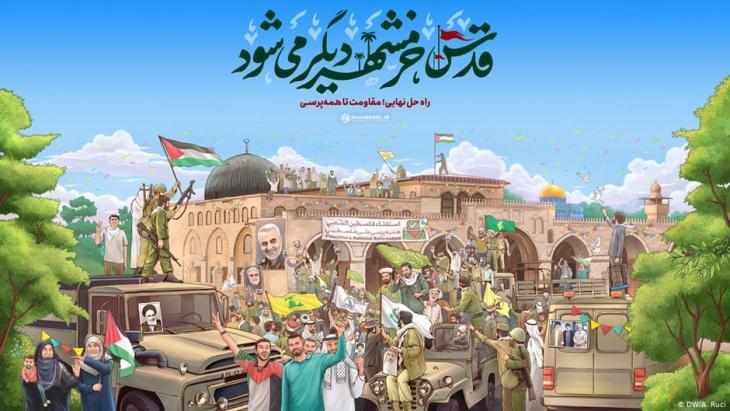 Temple Mount in the hands of Pasdaran, Hezbollah & co.: Iran's revolutionary leader Ali Khamenei provoked sharp international criticism with an image of the "Final Solution" in Jerusalem. The drawing under the motto "Palestine will be free" shows the Jerusalem Temple Mount. Above it, it says, "The Final Solution: resisting until a referendum." The occasion was Al-Quds Day, which recalls Israel's occupation of East Jerusalem during the Six Day War in 1967. Al-Quds is the Arabic name for Jerusalem

Nasrallah's reaction to the German Minister's ban was surprisingly mild. Not a word of condemnation or complaint that Horst Seehofer had called Hezbollah a terrorist organisation. The Party of God has no members in Germany, Nasrallah said, and called on all Lebanese in Germany to abide by the law. The days of verbal offensive would seem to be over. Slogans of perseverance are now the order of the day.

In doing so, the Hezbollah leader openly and unambiguously contradicted his mentor and idol, the Iranian revolutionary leader Ali Khamenei, who not only supports Hezbollah, but the entire "axis". Khamenei still sees himself on the offensive: he is seeking escalation, at least verbally. On the eve of Al-Quds Day, the religious leader of Iran put a poster online on his official website depicting a "free" Palestine, using the Nazi euphemism "Final Solution".

The poster, published in Farsi, Arabic and English, was entitled: "Palestine will be free. The Final Solution: resistance until the referendum". Below it is a drawing of soldiers from Islamic countries waving Palestinian flags and an image of Iranian General Soleimani, who was killed by the USA. In the foreground is the Al-Aqsa Mosque on Jerusalem's Temple Mount, in the background the Dome of the Rock.

The use of the term "Final Solution" was neither a faux pas nor a coincidence. Khamenei's most important foreign policy advisors, such as Ali Akbar Velayati or Kamal Kharrazi, are graduates of U.S. universities. They know what emotions the word arouses in the Western public in connection with Jews. Khamenei knows that too. The provocation was intentional. The anticipated strong reactions from abroad were something he was looking forward to.

A French artist has used photos of torture from Abu Ghraib for an oversized artwork at the Berlin Biennale. Reactions from fellow artists have been mixed, with some criticising ... END_OF_DOCUMENT_TOKEN_TO_BE_REPLACED

Since Ali Khamenei, Iran's most powerful man, has openly and unconditionally come out in support of Putin's war in Ukraine, logistical help is on its way, with an allegedly ... END_OF_DOCUMENT_TOKEN_TO_BE_REPLACED

It is possible to write about the Holocaust and the crimes of colonial powers without downplaying anything. In her latest book, Charlotte Wiedemann focuses on the numerous blind ... END_OF_DOCUMENT_TOKEN_TO_BE_REPLACED

This year Annemarie Schimmel, the great German scholar of Islamic studies, would have turned 100. Unique within the German and international academic community of her time, ... END_OF_DOCUMENT_TOKEN_TO_BE_REPLACED

The highly controversial Indian blockbuster "The Kashmir Files“, on the exodus of Kashmiri Hindus in the 1990s, is characterised by unilateral representations, negative ... END_OF_DOCUMENT_TOKEN_TO_BE_REPLACED

END_OF_DOCUMENT_TOKEN_TO_BE_REPLACED
Social media
and networks
Subscribe to our
newsletter