And they were quick to occur. Immediately after the provocation, the White House, U.S. Secretary of State Mike Pompeo, EU chief diplomat Josep Borrell and, of course, Israeli Prime Minister Benjamin Netanyahu reacted as expected. And all condemned Khamenei's choice of words. The calculated escalation took its course.

Shortly after the publication of the "Final Solution Poster", Benjamin Netanyahu tweeted that the idea of implementing the "Final Solution" against Israel, recalled the Nazis' "Final Solution" for the annihilation of the Jewish people. Immediately, as if it had just been waiting for it, the news agency Fars reported Netanyahu's reaction with visible relish. Fars is the most important propaganda organ of the Revolutionary Guards. The guards themselves published their own Israel Declaration, in which they claimed to have evidence for the imminent disappearance of "Zionist rule in occupied Palestine".

At noon on Al-Quds Day, Iranian television then broadcast Khamenei's speech on Israel. And here the religious leader went even further: "The Zionist entity" is like the coronavirus that has attacked mankind, he declared and called on the world to fight against "this entity".

Khamenei or Nasrallah, who was right?

But why this strange provocation, why this language, why is Khamenei deliberately driving Iran further into international isolation? The fight against the state of Israel is practically part of the DNA of the Islamic Republic – a state called Israel does not officially exist – but Khamenei's verbal enmity towards Israel went further than usual this year. 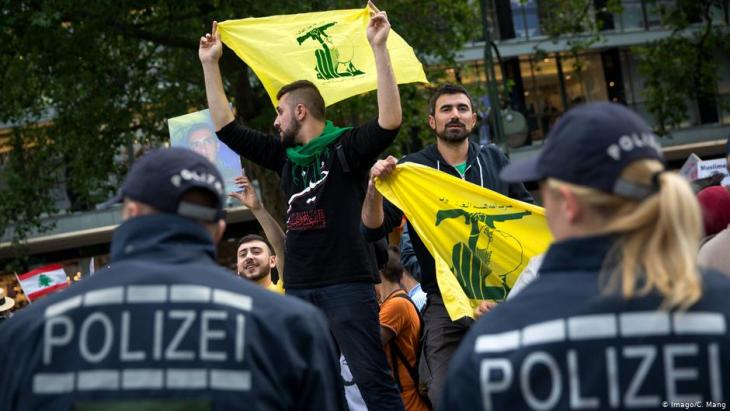 Hezbollah ban: German Minister of the Interior Horst Seehofer banned Hezbollah activities in the Federal Republic at the end of April. The Lebanon-based Shia organisation is supported by Iran. Its military arm has been classified as a terrorist organisation by the EU since 2013. The USA and Israel had long demanded bans on the partner organisations. Hezbollah itself accused the German government of kowtowing to the USA

There is a solid domestic political reason for this: his regime is indeed in the "Valley of Abu Taleb", to quote Hezbollah leader Hassan Nasrallah. The "axis of resistance", i.e. the paramilitary Shia, is indeed under massive pressure: in Lebanon and Syria, Israel bombs pro-Iranian groups – on a regular basis and with Russia's tacit approval. In Iraq, the new Prime Minister Mustafa Kadhimi wants to disarm the Shia militias. And in war-stricken Yemen, misery continues, without any major change at the front.

Motherland at a dead end

And Iran, the motherland of this "axis", is itself in a hopeless situation. It has no foreign trade to speak of. The sanctions are perfect, banking connections with Iran are non-existent. Even the border with neighbouring Iraq is currently closed due to the corona pandemic. Nor is there any exchange of goods with this ally either.

Fearing that in this impasse someone might propose entering into talks with the USA, Khamenei is adopting a harsher tone. Anyone who claims that Iran is under siege, is running the enemy's business, he said last Monday in a video addressed to students loyal to the regime. Khamenei encouraged them to fight anyone in the country who dared "sow doubt" or demand negotiations with America.

Iran was the only state in the world that protested against the German ban on Hezbollah activities. Even the Lebanon's Hezbollah government, which includes two Lebanon's Hezbollah ministers, remained silent. For Khamenei, defamatory and apocalyptic language seems to be a way of preventing the Islamic Republic's downfall. Will it work?

A French artist has used photos of torture from Abu Ghraib for an oversized artwork at the Berlin Biennale. Reactions from fellow artists have been mixed, with some criticising ... END_OF_DOCUMENT_TOKEN_TO_BE_REPLACED

Since Ali Khamenei, Iran's most powerful man, has openly and unconditionally come out in support of Putin's war in Ukraine, logistical help is on its way, with an allegedly ... END_OF_DOCUMENT_TOKEN_TO_BE_REPLACED

It is possible to write about the Holocaust and the crimes of colonial powers without downplaying anything. In her latest book, Charlotte Wiedemann focuses on the numerous blind ... END_OF_DOCUMENT_TOKEN_TO_BE_REPLACED

This year Annemarie Schimmel, the great German scholar of Islamic studies, would have turned 100. Unique within the German and international academic community of her time, ... END_OF_DOCUMENT_TOKEN_TO_BE_REPLACED

The highly controversial Indian blockbuster "The Kashmir Files“, on the exodus of Kashmiri Hindus in the 1990s, is characterised by unilateral representations, negative ... END_OF_DOCUMENT_TOKEN_TO_BE_REPLACED

END_OF_DOCUMENT_TOKEN_TO_BE_REPLACED
Social media
and networks
Subscribe to our
newsletter