1949-born Spôjmai Zariâb left Kabul in 1991 for France. But unlike the works of other exiled writers, Zariâb's literature is an authentic insight into Afghan hearts, and it has the potential to reach normal Afghan readers, writes Stefan Weidner 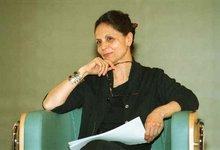 Michael Barry, French expert on Persian literature, considers Spôjmai Zariâb to be among the three greatest Afghan contemporary writers – along with the two poets, Khalîlî and Madjroûh

​​When asked by their children why cats are not human beings, parents should think very carefully before answering. The mother in the story When Cats Turn Human from the eponymous volume of short stories by Spôjmai Zariâb answers her daughter a little too carelessly.

"Humans don't have tails," she replies. "Humans walk upright on two feet." The daughter, who has just spent a day at the zoo with her mother, concludes from this that a cat without a tail walking upright on two feet would be a human and begins to share this discovery with others. This assumption might make Western readers smile at the little girl's fantastical logic, but in an atmosphere of poverty and violence such as prevails in Afghanistan, where cats are not domestic pets but wild creatures, it ends in a bloodbath.

Most of Zariâb's short stories are about children and even though they don't all end as brutally as the story of the cats that turn human, they are not suitable for children – for young people maybe, but definitely not for children.

An act of literary wisdom

The fact that the Afghan author, who was born in 1949 and has been living in France since 1991, chooses children as her protagonists is an act of literary wisdom. The violence and the spiritual and material poverty that have dominated life in Afghanistan for the past thirty years would be too much even for a writer of Tolstoy's calibre.

Describing the images that this situation burns into children's memories scales down the image without distorting the proportions: while the mutilation of the cat is not an act of violence perpetrated on a human being, the fact that it is a cat does not make the mutilation any less traumatic for children.

In the footsteps of great Iranian literature

Spôjmai Zariâb writes in Dari, the Afghan variant of the Farsi spoken in Iran. The differences between the two languages are not very marked. Dari just sounds a little more antiquated and has been spared the rapid changes undergone by languages in swiftly modernising countries such as Iran. Anyone who writes in Dari is therefore in a position to pick up where the great Iranian literature of the 20th century left off and is following in the footsteps of modernists like Sadeq Hedayat, Hushang Golshiri, and Mahmud Doulatabi.

Nevertheless, only very few Afghan authors succeed in using the forms of modernist literature as well as Atiq Rahimi, who was born in 1963, unless, of course, they have been writing in Western languages for a long time, as is the case with Khaled Hosseini in the U.S. Two of Rahimi's books – albeit very slender volumes – have been published in German.

Zariâb's short stories, in comparison, are extremely conventional. Even though children are the heroes of her stories, she chooses not to follow the current trend of relating events from their perspective. As the author, she frequently comments and passes moral judgement on what happens. But while that might sound strange to experienced readers in this part of the world, this is exactly what would make these short stories accessible for many readers in Afghanistan in the first place.

And while, for example, one always has the feeling that Atiq Rahimi is writing exclusively for Western readers (albeit in Dari) or a few dozen intellectuals in Kabul, Zariâb's literature has the potential to reach normal Afghan readers. It is therefore hard to imagine a more authentic insight into Afghan hearts.

Most of the stories are set in the days before the Soviet invasion of Afghanistan. Even back then, only a person's immediate family was capable of offering security. In the first story, a relative puts a damper on a family celebration with his Islamically embellished style of dominance by burning pictures of animals painted with childish glee by the daughter of the family.

"On judgement day," he rants, "all these animals will come after her and pester her saying: 'Now that you have drawn us, give us a soul; bring us to life.' Can she do that? Can she give them life?"

A glance at the book's beautiful cover, which features original illustrations from The Book of Animals by al-Jahiz (d. 869), would help to dispel the clouds generated by the uncle's narrow-minded interpretation of Islam.

Naturally, you don't need reactionary Islam to make life hell. Indifference is quite enough. This point is illustrated by the teacher who pays little attention to her students and then sets them the end-of-year task of creating a "workpiece". She is unable and unwilling to tell them what she means by "workpiece".

The story "Subdued by Numbers", on the other hand, highlights the plight of exiles living abroad. While one female Afghan student yearns to hear her mother tongue again, one of her fellow students cannot get the exchange rate out of his head. Regardless of what he sees and considers buying – and despite the fact that he has a scholarship – he is plagued by thoughts of the equivalent value in his native currency.

This monetary comparison outrages him so much that he embarks on an extreme course of thrift. Quite apart from the injury he does to his soul, his scrimping and saving makes his life a misery.

This article was previously published in Fikrun wa Fann.

Portrait Atiq Rahimi
Sooner Mysticicm than Jihad
Atiq Rahimi had written books that nobody was interested in. Then came September 11, and – all of a sudden – the man in exile was the literary voice of Afghanistan. A portrait by Brigitte Neumann

Portrait Mohammad Shah
"Afghans Have Been Cut off from Their Memories"
In Afghanistan book stores are few and publishers in many cases still face opposition from the authorities, says Mohammad Shah, publisher and book store owner. A portrait by Christoph Burgmer

END_OF_DOCUMENT_TOKEN_TO_BE_REPLACED
Social media
and networks
Subscribe to our
newsletter