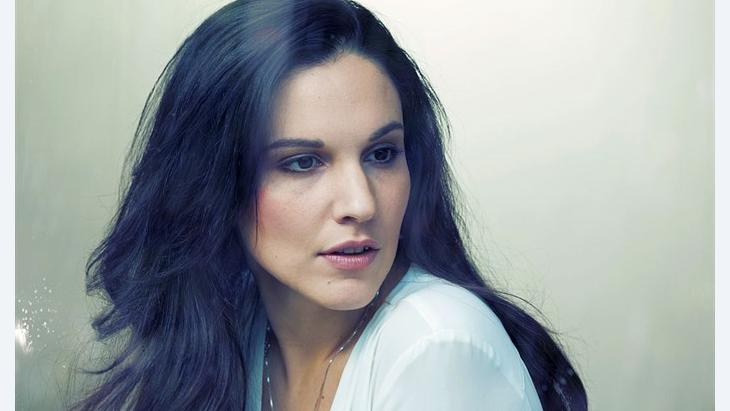 Simin Tander and Tord Gustavsen
The harmony of mysticism

It may sound bizarre to begin with: Norwegian hymns clothed in the Afghan Pashtu language and alternated with poems by the Persian mystic Rumi, sung in English. But the deeper the occupation with spiritual traditions, the more boundaries dissolve, parallels between Islam and Christianity becoming increasingly tangible.

When it comes to music, such fusion can lead to exhilarating results. This is very much the case with "What Was Said", the joint album by the Afghan-German singer Simin Tander and the Norwegian musicians Tord Gustavsen and Jarle Vespestad.

The Cologne-based singer Simin Tander is admired across Europe for her delicate jazz compositions, presented on the albums "Wagma" and "When Waters Travel Home" recorded with her quartet, as well as for her part in the cross-cultural big band Eurasians Unity, involving musicians from Tashkent to Germany.

Her new project is more inward-looking, discovering quiet sounds and spaces. Her partner on the piano is a specialist in this kind of introspection. "Tord Gustavsen has a very natural way of concentrating on the essence, on small melodies, on a single note. He′s very quick to feel the core of a piece. It′s a dream to play with a pianist who picks up your every breath and yet still gives you space," says Tander in interview with Qantara.de.

The pieces of this very special spiritual encounter came together step by step: Gustavsen, born into a Protestant environment, gained experience with church music from an early age. He developed a liberal approach to Christianity and grew interested in mystical traditions of diverse cultures, discovering Sufi poetry.

Tander has been familiar with Gustavsen′s work since her student days, while he is an admirer of her voice and her style of presenting jazz sounds in Pashtu, her father′s language. And the sound of the language also sparked their collaboration: the translation into Pashtu lifts the old hymns, set to traditional Norwegian melodies in the 18th and 19th centuries by pastors, professors and teachers, to a universal level.

"Tord wanted to raise the lyrics out of their conservative fetters and concentrate on their mystic potential," says Tander. "And for me it was important that the verses are changed so that I can forge a connection to them without the close reference to Christian teachings."

The translations went into sensitive detail: Gustavsen had his new interpretations translated by the Afghan poet B. Hamsaaya, with Naqib Sermelwall, a longstanding acquaintance of the Tander family who has been working intensively with Pashtu and Sufi poetry and literature for decades, weighing up individual words. Reading the new version of a former Lutheran hymn by Peter Jacobsen Hygom, for example, gives an impression of the fusion with the divine, rendered almost as the Persian mystic Jalal al-Din Rumi might have described it.

Tander′s aspirated, suggestive vocals opens up the meditative space in an intimate dynamic with the reduced piano lines. Percussionist Jarle Vespestad adds rhythmic impulses laden with imagination. "For me it was also a question of trusting myself to leave things out and allow pauses, to immerse myself in a sound full of calm. I couldn′t have done that two years ago. The main thing is the devotion, without a trace of anything forced."

In this bound-breaking spirituality, it is no longer even important that Pashtu is a language of Islamic culture, says Tander. "As most listeners don′t understand the words, they take in the contemplative aspect via the sounds." Inversely, the additional songs based on works by Rumi are also not performed in the original language, but in Coleman Barks′ English translation.

Gustavsen has set the poems to music closely aligned to the words′ rhythm, creating a recitative atmosphere. The poetry comes across very directly in his renderings, for example in the title piece "What Was Said". Here, devotion to the divine is described as the force that makes a rose bloom and a pomegranate-blossom blush.

It is distinctive for this project′s openness that the CD centres around another poem not bred on religious soil at all. "I Refuse" originates from the American poet Kenneth Rexroth, considered part of the Beat Generation. His verses embody an unbridled will for freedom, a disobedience to others′ expectations – and thus also a mentality that places one′s own spiritual experience over orthodox teachings and books.

Sufism and Christian music in harmony – in times in which the spectre of the culture clash is omnipresent, this combination might also be a signal. Tander relativises, however: "We don′t want to communicate that explicitly," she emphasises. "Much more than political signals, we′re interested in a passionate and personal approach to spirituality, which flows on in the music." Listeners who take time to immerse themselves in this music will experience the three artists′ great passion. A passion nourished by the divine in every one of us.

Her grandparents are Jews – born in Tunisia and Algeria. Director Cleo Cohen has now broken the silence about this with a very personal debut. By Nadine Wojcik END_OF_DOCUMENT_TOKEN_TO_BE_REPLACED

Life imprisonment for crimes against humanity: that was the sentence handed down to Anwar Raslan in the world's first trial of a member of the Syrian torture system. Matthias von ... END_OF_DOCUMENT_TOKEN_TO_BE_REPLACED

Every year in December, the team at Qantara.de takes a look back at the articles that proved most popular with our readers. This year is no different. Here is a run-down of the ... END_OF_DOCUMENT_TOKEN_TO_BE_REPLACED

With his new album, "A Voice Keeps Calling Me", the Persian santur player Kioomars Musayyebi is building bridges from Iran across the Arab world to European early music. By Stefan ... END_OF_DOCUMENT_TOKEN_TO_BE_REPLACED

Former lawyer Said Haider has invented a chatbot for those seeking advice on anti-discrimination issues – Meta is the first chatbot of its kind in the world. In conversation with ... END_OF_DOCUMENT_TOKEN_TO_BE_REPLACED

Benjamin Idriz, imam of the mosque in Penzberg near Munich, is one of the most prominent representatives of Islam in Germany. He sees his role as building bridges to mainstream ... END_OF_DOCUMENT_TOKEN_TO_BE_REPLACED
Author:
Stefan Franzen
Date:
Mail:
Send via mail

END_OF_DOCUMENT_TOKEN_TO_BE_REPLACED
Social media
and networks
Subscribe to our
newsletter