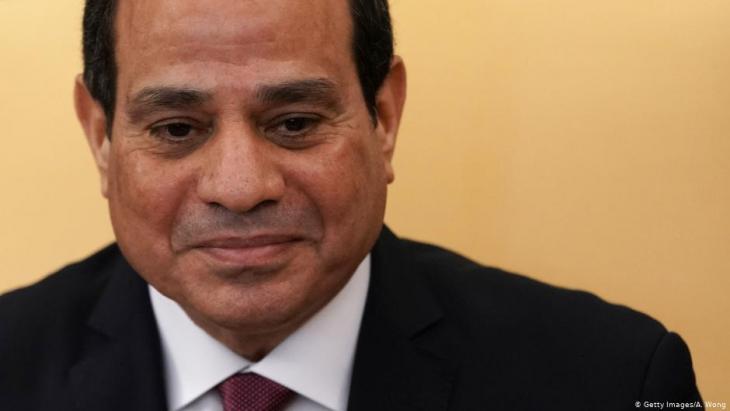 Since ascending to power in 2014, Egypt's general-turned-president Abdul Fattah al-Sisi has imposed himself as an uncontested leader, stamping out opposition despite criticism by rights groups.

His government has taken no chances and arrested over 600 people after hundreds of Egyptians protested his rule last week. The rare demonstrations followed an appeal by Mohamed Aly, an exiled Egyptian businessman in Spain, to topple Sisi.

The construction contractor has posted videos accusing Sisi of corruption and the military of wasting public money on building luxury properties. The president has dismissed the allegations as "lies and slander". He has also warned against the dangers of protesting, describing the 2011 revolution that unseated long-time autocrat Hosni Mubarak as a "mistake".

Sisi, a champion of relative stability in a turbulent region, commands the support of Western powers. U.S. President Donald Trump regularly lavishes him with praise. On Monday, he hailed him as "a great leader" who brought "order" to Egypt.

A former army chief, Sisi stormed to the presidency in 2014 polls with 96.9 percent of the vote, a year after he led the military in ousting Egypt's first freely-elected president, the Islamist Mohammed Morsi.

Whether people love or loathe Sisi, regard him as a bulwark of stability or an autocrat, he is an undisputed political force in Egypt. Under Sisi, authorities have silenced all forms of political opposition in a sweeping crackdown on Islamists as well as secular and liberal activists. Even prominent novelists, actors and singers who express the slightest criticism of his rule have not been spared.

In the run-up to his 2018 re-election, he swept aside all token opposition parties, becoming the only real choice on the ballot paper. He won with 97 percent of votes, official results said. In April, he further cemented his grip on power with a snap referendum to approve constitutional changes to allow him to remain president until 2030.

Sisi was born in November 1954 in El-Gamaleya neighbourhood in the heart of Islamic Cairo. He graduated from Egypt's military academy in 1977, later studied in Britain and the United States and became military intelligence chief under Mubarak.

As Egypt's leader, Sisi is often seen microphone in hand, presiding over public ceremonies. Speaking in Egypt's Arabic dialect, sometimes laughing in the middle of his own lengthy speeches, he projects an image of father of the nation. He is fond of telling Egyptians they are the apple of his eye, stressing he is there only to serve the people.

Regularly invoking stability as a cornerstone to achieving prosperity, he has made the fight against "terrorism" a priority. Many Egyptians see him as the right man to lead the country after years of political, security and economic turmoil that followed Mubarak's ousting.

A father of four whose wife has recently been thrust in the spotlight with the corruption revelations, Sisi is described by those close to him as a pious Muslim. But he is also reported to have a strong sense of his own importance, with audio recordings leaked by Islamist-leaning media pointing to a large ego. In one leak, Sisi recalls a dream about the late president Anwar Sadat, which he saw as an omen that he would one day become powerful himself.

Ironically, it was now-jailed Morsi who appointed Sisi defence minister and commander-in-chief of the armed forces in 2012. A year later, Sisi ended Morsi's turbulent year in power and cracked down on the Islamist's supporters, with hundreds of people killed in weeks.

On 14 August 2013, security forces killed more than 700 people in Cairo when they dispersed sit-ins by pro-Morsi protesters. Human Rights Watch said the "mass killings of protesters" that day amounted to "probable crimes against humanity".

Since Morsi's removal, tens of thousands of his followers have been jailed and hundreds sentenced in rapid mass trials condemned by the United Nations. Sisi has also launched a military campaign against Islamic State group fighters in the north of the Sinai Peninsula. But so far he has been unable to quash the insurgency.

On the economic front, he has launched an IMF-mandated programme of drastic reforms that include cutting energy subsidies, introducing value-added tax and floating the pound.

During his first presidential campaign, he said "talking about freedoms" should not take precedence over "national security".