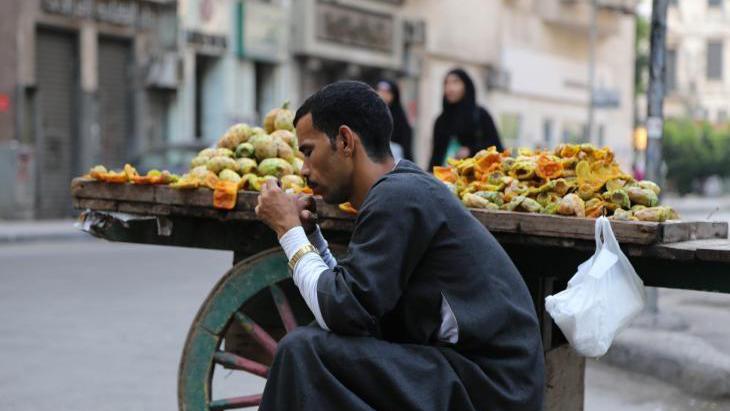 Sisi's Egyptian crisis
″Where are the youth?″

Back in early 2011, there was a spark of hope. The entire international community appreciated the Arab Spring uprisings, which were driven by young people demanding change in Egypt and other Arab countries. It seemed that everything was going to be fine. Six years later, a sense of gloom prevails in Egypt. By Basma El-Mahdy

In 2011, Egypt′s youth embodied hope. Young people protested in the streets and ultimately toppled Hosni Mubarak, the president who had autocratically run the country for three decades. The young generation was considered ″the main player″ in this largely non-violent revolution. Activists expected democracy to improve people′s economic prospects and make under- and unemployment a thing of the past. On 28 February 2011, the cover story of Time magazine celebrated ″The generation changing the world″. In Egypt, Al-Ahram, the government newspaper, published a translation of the cover story.

That was then. Today, a sense of gloom has replaced euphoria and the young generation feels marginalised.

After a transitional period, elections were held in Egypt in 2012. Mohammed Morsi, the candidate of the Muslim Brotherhood, became the country′s first elected president. He did not manage to improve the economic situation, however, but seemed focused on entrenching the influence of his political party. He lost power in a military coup one year after taking office in the summer of 2013.

The country′s new president is Abdul Fattah al-Sisi, the general who led the coup and who was later confirmed in office in elections that were neither free nor fair because the Muslim Brotherhood was banned. In the previous elections, it had proved to be the strongest political force in the country, but the military leaders consider it a terrorist organisation. Al-Sisi acted oppressively from the start. Today, he is constraining civil liberties more than Mubarak did.

Those who protested in the streets in 2011 neither support the Muslim Brotherhood nor the military. They did not get what they wanted: a liberated society with opportunities for everyone.

Al-Sisi would like to get the younger generation on his side. In January last year, he said 2016 would be the ″year of Egyptian youth″ and promised to start various programmes to improve education and economic prospects. The announcement coincided with the launch of the Knowledge Bank, a state-run project to provide free access to educational online resources that normally are only available to those who pay hefty subscription fees.

A few days later, on 25 January, the police arrested young people. It was the fifth anniversary of the first day of protests in 2011.

Last year, al-Sisi also launched the Presidential Leadership Programme (PLP). It is meant to ″enable thousands of youth to start their journey to leadership and employment″. According to the official website, participants will be trained in three stages concerning:

public administration and entrepreneurship and

In October, the President′s Office supervised Egypt′s First National Youth Conference in the tourist resort of Sharm El-Sheikh. Far away from the congested capital Cairo, 3,000 young people gathered for three days and met experts from many disciplines to discuss political, economic and other issues. The event was linked to the PLP. 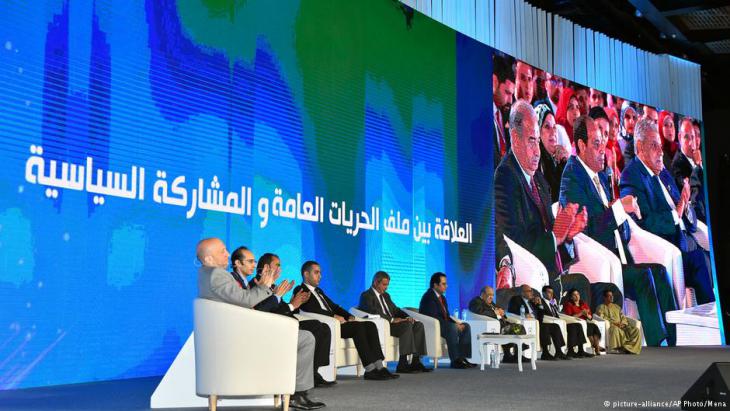 Appealing to a new target audience:"in January last year, al-Sisi said 2016 would be the 'year of Egyptian youth' and promised to start various programmes to improve education and economic prospects. The announcement coincided with the launch of the Knowledge Bank, a state-run project to provide free access to educational online resources that are normally only available to those who pay hefty subscription fees," writes Basma El-Mahdy

Across the country, however, many members of the age group largely ignored the event or even refused to take part. Noor Mohamad was invited to go, for example, but did not want to. She says she is ″not interested in official youth activities″. She is 23 years old, has a BA in English literature and has been working in the private sector for a year and a half. In her eyes, the government rhetoric on youth leadership is empty given that the education system fails to prepare students for market requirements.

″Taking care of youth is not done by holding conferences,″ says Fatima Abdallah, a 26-year-old public-sector employee from Alexandria, Egypt′s second biggest city. ″We need action, not words.″ In her eyes, the conference was a mere propaganda event.

The fate of the ″disappeared″

Mariam Abdelaziz, a 23-year-old graphic designer living in Cairo, agrees. She says she heard about the youth conference, but didn′t follow the intensive media reports about it. She is not interested in propaganda, but would like to be informed about enforced disappearances. According to Amnesty International, hundreds of citizens have ″disappeared″, but the government stays silent on this matter.

Like many others, Mariam Abdelaziz says she would like to leave Egypt: ″I am a temporary visitor in my country, the land of no hope.″ To her, ″the revolution was a wakeup call″, but she admits her interest in politics has ″decreased sharply in the past years″. She feels grateful to those who wanted to introduce change, but points out that life is getting harder.

Not all young people who find the current situation unbearable were supporters of the revolution however. Ayshe Hassan, a 21 year old university student, appreciated the sense of stability and security provided by the Mubarak regime. Nonetheless, she is bitter about officialdom′s broken promises. She says that the status quo makes young people suffer because they lack prospects. Too many die ″trying to cross the Mediterranean Sea to get to Europe″, she points out.

One result of the conference was the government′s promise to release all detained youth who have not received judgements. It was, however, not the first promise of this kind. An opposition campaign immediately asked online: ″Where are the youth?″ The truth is that many young people are in detention and there is no trace of most people who ″disappeared″.

No scope for political action

Six years ago, Time magazine emphasised that young people used the Internet and social media to organise and fight for change. Today, advanced communications technology is not very helpful anymore. In November 2015, groups that support the Muslim Brotherhood tried to rally people for protests via social media, but the response was negligible.

As for the economic situation, it has been becoming more difficult too. With the country running out of foreign-exchange reserves, the government was forced to float the national currency in autumn. Otherwise, the International Monetary Fund would not have given it a much needed loan worth $ 12 billion. As a result, the Egyptian pound depreciated fast, making imported goods more expensive. Inflation has reduced people′s purchasing power.

It is impossible to turn back the clock. Young people′s attitude to life has changed. They do not see much scope for political action now, but they do not agree with the way things are going. In particular, many young women have been reassessing their options. In the long run, some hope that their generation may yet change the world. Fatima Abdallah says: ″The light at the end of the tunnel are the young people who become open-minded.″

All names of persons expressing criticism of Egypt′s current government have been changed.

Welcome to the world of Al Qasar, where Arabic music collides head-on with punk and psychedelic to create something powerful and beautiful. "Who Are We" is a raucous, subversive ... END_OF_DOCUMENT_TOKEN_TO_BE_REPLACED

Egyptian authorities have Mada Masr in their sights once again after critical reporting. But the editor of the country's last independent news source is adamant they will continue ... END_OF_DOCUMENT_TOKEN_TO_BE_REPLACED

Like Christianity, Europe's history is one of migration. Both have strong roots in the Orient and in cultures thousands of years old. Cultural historian Bernhard Braun invites us ... END_OF_DOCUMENT_TOKEN_TO_BE_REPLACED

When she ascended the throne, millions of Muslims still lived under British rule. Later, Elizabeth II appealed for tolerance in a multi-religious society. She was the first ... END_OF_DOCUMENT_TOKEN_TO_BE_REPLACED

END_OF_DOCUMENT_TOKEN_TO_BE_REPLACED
Social media
and networks
Subscribe to our
newsletter