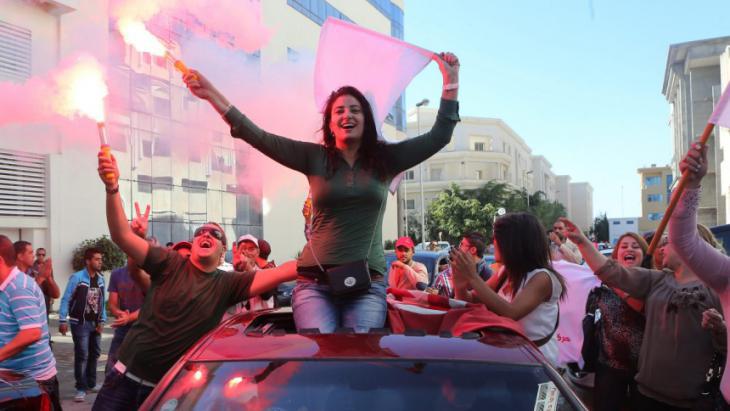 Six lessons learned from Tunisia's recent elections
"Religion is God's, but democracy belongs to everyone!"

The most recent elections in Tunisia have made it clear that, in spite of numerous setbacks over the last three years, the Arab Spring continues to bear fruit. According to Egyptian journalist and professor Khalil al-Anani, the Tunisian experiment once again proves that Tunisia is a long way ahead of the other Arab countries undergoing transformation

It is no exaggeration to say that the most recent political developments in Tunisia have highlighted numerous symbolic dimensions and paradoxes that cannot simply be ignored when assessing the importance of these developments for the whole region. Six fundamental lessons can be derived from the Tunisian example.

1  "Despotism versus chaos" is a pretext to legitimate authoritarian rule

Even before the first wave of change in the Arab world, its autocratic rulers often claimed that authoritarian rule was necessary in order to prevent chaos taking hold, as a pretext for quashing the struggle for freedom in their states.

After the revolutions broke out, these rulers tried to discredit political change in order to put the Arab masses off the idea. Representatives of the old regimes presented political change as a synonym for chaos and instability.

Egypt's ex-president Hosni Mubarak put forward this view during the revolution of 25 January 2011, as did the former Libyan dictator Muammar al-Gaddafi. Bashar al-Assad is doing exactly the same thing now in Syria. Indeed the current regime in Egypt, headed by Abdul Fattah al-Sisi, continues to propagate this "doctrine", even taking it to extremes. 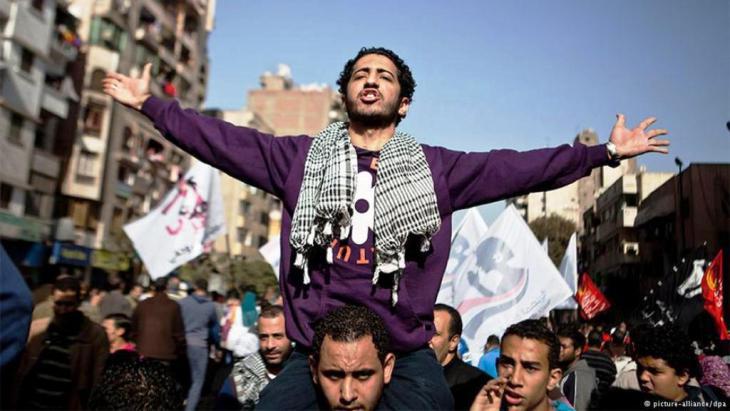 Democratic change as an irreversible process: "The most important thing, however, is that the countless sacrifices made by young people in the Arab world for a better future for future generations in their countries were not, and will not have been, in vain," writes Khalil al-Anani

2  Post-revolutionary chaos is the result of decades of oppression

It is true that chaos does reign in many parts of the Arab world following the political turmoil there. But this chaos is the result of decades of torpor, ossification and oppression; it is not born of the desire for change. This chaos can be compared with a mighty explosion sweeping across the region following decades of repression and silent acceptance of the violation of basic human rights. People's suppressed rage at the strict rejection of all demands for political change had to ultimately find an outlet.

One of the paradoxes of the first wave of the Arab Spring was that it clearly debunked the theory of "stability from above". This had become the watchword of the Arab world's old regimes, a watchword that these regimes forced on their societies over the entire second half of the twentieth century. From Tunis to Sanaa, many of these regimes have now collapsed to the shouts of young people in the streets and squares.

In this regard, the Tunisian experience highlights a third way, beyond chaos and despotism: namely that of democracy. Many nations and societies have already taken this path successfully and have achieved genuine stability by lowering the costs of change, showing respect for the will of citizens and working to implement their interests.

The Tunisians certainly haven't re-invented the wheel in this respect, but even so, they have discovered this path and have to date stuck to it consistently, which means that so far, they have been relatively successful in navigating the phase of political distortion that comes with every democratic transformation. 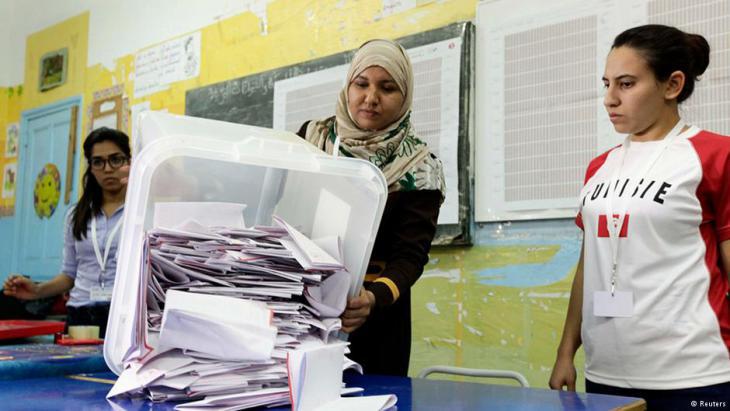 Litmus test for democracy: "The Tunisians have left the extremists without a leg to stand on, as they can no longer claim that elections are useless as a mechanism of peaceful conflict resolution," writes Khalil al-Anani

3  The "Islamist spectre" is a myth

The example of Tunisia also disproves the theory of the all-devouring "Islamist dragon", which is still being invoked by despots and secular powers in order to discredit democratic ideas at home and abroad. At the last parliamentary election in Tunisia, the Islamist party Ennahda only came second, behind the secular party Nidaa Tounes, even though it had managed to attract a majority in the preceding elections at the end of 2011.

So while the party will continue to play a significant role in Tunisia's new political system, the loss of its dominant position has exposed a very simple fact: leaving all attempts at glorification or demonisation aside, moderate Islamists are just a group of people like any other; they too are bound by the laws of victory and defeat, ascendency and decline.

The leadership of Ennahda obviously learned from the mistakes of their like-minded comrades in Egypt, as they did not reject political consensus, were prepared to make real concessions and avoided any attempt at hegemony. For this reason, there is hope that the secular powers in Tunisia can learn from this as well. Otherwise there is a danger that they will fall into the same trap as the Muslim Brotherhood in Egypt, where all opposition was excluded and demonised in the most despicable, fascist way, leading to the failure of the democratic experience in that country.

4  Conflicts can be resolved by votes, not violence 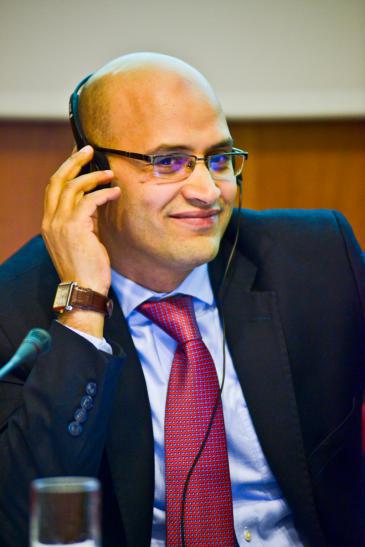 Khalil al-Anani is a highly renowned expert in the Arab world. He writes for "Al-Hayat", "Egypt Daily News" and Al-Jazeera. He is also a professor at the Johns Hopkins School of Advanced International Studies in Washington

The Tunisian experience has shown that elections are the shortest, best and most promising route to change in the Arab world. This is first and foremost an important lesson that the proponents of authoritarian and fundamentalist religious models of government still have to learn.

This democratic transition was successful in Tunisia primarily because the weapons in the hands of the state were neutralised and kept out of the political-civil conflict. There was neither support for a coup, nor were there demands for the military to take power. Tunisia created an historic precedent in the Arab world in that its citizens managed to solve their political conflicts without guns and uniforms.

The Tunisians also sent an unequivocal message to all those forces still attempting to give the political conflicts in their countries a religious and ideological charge. The message is this: "religion is God's, but democracy belongs to everyone". And democratic elections can achieve what weapons cannot. With these arguments, the Tunisians have left the extremists without a leg to stand on, as they can no longer claim that elections are useless as a mechanism of peaceful conflict resolution.

However, other Arab societies have so far not learned this lesson, because they have not managed to extricate themselves from the vicious circle of chaos and violence that has afflicted the whole region since the calls for democracy and freedom fell silent and disillusionment set in, particularly among young people.

5  The "One Man, One Vote, One Time" doctrine is an illusion

However, the most important lesson of all is the refutation of the so-called "One Man, One Vote, One Time" doctrine, which harks back to a quote from the former US ambassador to Israel and Syria, Edward Djerejian, in the early 1990s, after the Islamic Salvation Front (FIS) won the 1991 parliamentary elections in Algeria. The doctrine assumes the incompatibility of political Islam and democracy. The Islamists, so the theory went, would only abuse their electoral victory, using it to cement their religious and undemocratic rule in state and society.

The way the Islamist party Ennahda has approached elections reveals a very different picture. In particular, following their most recent election defeat, they accepted the peaceful handover of power in Tunisia unreservedly, and the party leadership congratulated their political adversaries from Nidaa-Tounes on their victory. Even more important, however, is the fact that Ennahda made an effort to subordinate narrow-minded party-political thinking to the interests of the nation – a real quantum leap for the Islamists' political discourse and actions!

It seems that for the first time in the Arab world, there may actually be Islamists and democrats.

It also raises the hope that a new strain of Islamism could emerge, one that would forge a path between rigid orthodoxy on the one hand and extremist orientation on the other; a strain prepared to take up progressive thoughts and stimuli, that would also reach the younger members of this movement and teach them the values of freedom, democracy and social responsibility.

6  Democratic change is an irreversible process

Finally, the Tunisian experience has also shown that democratic transformation in the Arab world can no longer be stopped, even if it has temporarily faltered in many of the nations in transition. The example of Tunisia clearly shows that the political losers, namely the supporters of the old despotic regimes, will not succeed in turning back the wheel of history, even if these forces do celebrate the occasional political victory.

The most important thing, however, is that the countless sacrifices made by young people in the Arab world for a better future for generations to come in their countries were not, and will not have been, in vain.

Abortions are illegal in Egypt unless they are necessary to save a married woman's life. But that doesn't stop local women from having one. Egyptian society needs to acknowledge ... END_OF_DOCUMENT_TOKEN_TO_BE_REPLACED

Food prices doubled, salaries halved, banks restricting withdrawals: Egyptians now have the same problems as the Lebanese. But if things get worse here, the fallout will be far ... END_OF_DOCUMENT_TOKEN_TO_BE_REPLACED

Giessen, Eichsfeld, Kusel, Berlin – cars bearing old German number plates are the latest trend on the streets of Cairo. Many Egyptians regard the discarded plates as chic. What ... END_OF_DOCUMENT_TOKEN_TO_BE_REPLACED

Egyptian Sufis have been on the defensive against the country's Islamists for decades. Meanwhile, interest in mysticism is growing among the young members of Cairo’s middle and ... END_OF_DOCUMENT_TOKEN_TO_BE_REPLACED

Chinese President Xi Jinping's visit to Saudi Arabia in December 2022 may have rattled Washington, but it simply highlighted the Arabs’ desire to diversify their foreign relations ... END_OF_DOCUMENT_TOKEN_TO_BE_REPLACED

END_OF_DOCUMENT_TOKEN_TO_BE_REPLACED
Social media
and networks
Subscribe to our
newsletter