Turkey and Israel mark the sixtieth anniversary of their diplomatic relations this year. Theirs has been a fruitful if conflict-ridden relationship. But there has been more than just the desire to make peace between the Israelis and the Arabs. Jan Felix Engelhardt looks back at the start of the relationship 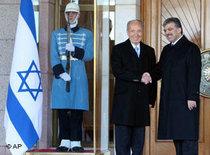 ​​ On March 28th, 1949, the Turkish parliament recognised Israel as a sovereign state. The Jewish community in Istanbul and other Turkish cities greeted the announcement with celebrations: Turkey was the first Muslim country to recognise the Jewish state, less than a year after its foundation. In the Neve Shalom synagogue in Istanbul, the event was marked with a special service; Jewish families celebrated the new friendship until late into the night.

In spite of discriminatory minority laws during the war years, in spite of public and political opposition, the Turkish government under President Ismet Inönü was prepared to establish close relations with the young Israeli state. How did it come to this?

During the Second World War, Turkey had signed a defence pact with France and Britain, but she remained neutral and took no active part in the war. Many officers and politicians were impressed by the military successes of Nazi Germany in the early years of the war, while others were reluctant to come into conflict with the Axis powers. At the same time, however, Turkey was the natural bridge to Palestine, and it was the natural transit post for the Aliya Bet, the illegal immigration of European Jews to the promised land.

Turkey vacillated between supporting and hindering the flight of Jews from Europe. Prominent Jewish scientists were readily given posts at Turkish universities, while ordinary refugees could not get work permits. Turkish diplomats in Europe rescued Jewish families from the Nazis, while the authorities in Istanbul refused any assistance to the overcrowded Jewish refugee ship, the Struma.

Meanwhile, historians in both Israel and Turkey continued to work at the long story of Ottoman-Turkish tolerance, starting with the welcome given to Sephardi Jews in the Ottoman Empire when they were exiled from Spain in 1492, all the way to the protection of Jewish refugees from the Nazis. But, in fact, the behaviour of the Turks was much more contradictory than the picture implied. 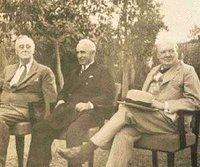 ​​ The Inönü government walked a tightrope in maintaining its neutral position during the war. Turkey only came down firmly on the side of the allies when it was clear that Nazi Germany was going to be defeated.

So Turkish recognition of Israel was not just motivated by the country's political past. More important was the role that Turkey wanted to play in the future – indeed, the role it felt it had to play in the Middle East and at the start of the Cold War. The main political motivation was to secure Turkey's role in the Western alliance, driven by its fear of the Soviet Union. Turkey was at the top of Stalin's shopping list – and Turkey began to feel Soviet pressure directly after the end of the Second World War.

Fear of the Soviet threat

In June 1945, the Soviet Union demanded control over the Bosporus and the Dardanelles – Russia's only route to the Mediterranean and thus an economic and military bottleneck. But the straits were also essential to Turkey's communications, giving access to Istanbul, the country's largest city. The Inönü government was seriously concerned at the idea of Soviet warships in the centre of Turkey, and it sought the protection of the Western powers.

The Western powers may have been a bit annoyed at Turkey's failure to offer support during the war, but they saw the conflict with the Soviet Union as one of strategic importance. As a result, the Truman Doctrine and the Marshall Plan both included Turkey as a bulwark against communism.

Turkey's initial opposition to the idea of independent Jewish state before 1949 can also be explained by Inönü's anti-communist position. The government feared Soviet influence on the Zionists, leading it to vote against the United Nations partition plan in 1947. Only after Stalin began to persecute the Jews and the Arab states began to seek Soviet support did Turkey move towards recognition.

In March 1949, just one year after the proclamation of the Jewish state, Israel was negotiating peace treaties with the Arab countries it had defeated in the war of independence. The United Nations was also trying to bring about peace in the region. The UNCCP, a UN mediation commission, was trying to bring about reconciliation between Arabs and Israelis, to solve the refugee problem and to clarify the status of Jerusalem. American, French – and Turkish – delegations were involved in negotiations.

The mission failed, but for Turkey, its involvement was a foundation stone for its future political and economic relationship with Israel. Ankara had emerged as an honest broker in the Arab-Jewish conflict, accepted by both sides as a Muslim, neutral country. Turkey had good relations with the Arab countries, which had serious doubts about France and the USA as appropriate mediators.

The United Nations saw this as their trump card, especially since leading Israeli politicians – among them the prime minister, David Ben Gurion, and the foreign minister, Moshe Sharett – had studied and worked in Turkey. The Turkish delegation under Hüseyin Cahit Yalcin took up the task together with the Americans and the French.

Together against Arab socialism

Yalçın, who was over seventy and a well-known writer, was listened to by both Arabs and Israelis. The commission negotiated in both Jerusalem and Rhodes, since the Israelis and the Arabs were not prepared to talk directly to each other. But the initial optimism that the conflict could be solved through talks was soon dispelled as a result of resistance on both sides.

At a conference in Lausanne, the conflict parties were only able to make vague declarations about dealing with the refugee issue and about the status of Jerusalem. The mediators continued their work until the sixties, but their attempts always ended in diplomatic failure.

For Turkey though, involvement in the commission was the country's first opportunity since the war to play a role on the international stage. As the UN negotiations continued, Turkey and Israel came closer. On March 19th, Turkish and Israeli ministers met for the first time in Ankara. The Israeli Foreign Minister, Moshe Sharett, and the Turkish Trade Minister Barlas called for closer economic and cultural ties. Both sides were concerned about the growth of Arab socialism, and saw themselves as allies in opposing the development.

On the way to the West

In addition, Turkey was keen to be more firmly bound into the Western alliance. At the same time as the Turkish-Israeli rapprochement, the Turkish foreign minister, Necmettin Sadak, travelled to the World Bank in Washington to discuss credits for Turkey's economy. The West was waiting for a clear signal from Turkey that it supported its policies – in the Middle East as well as in the North Atlantic Treaty Organisation, about which discussions were taking place at the same time. Turkey joined the alliance a few years later.

And Turkey did indeed deliver the evidence that it was a reliable partner in the Cold War. On March 24th, the Turkish parliament voted in favour of the recognition of Israel, which took place formally on March 28th. The Jewish community celebrated: "We've recognised the State of Israel." The move was the basis for far-reaching military and economic cooperation between the two countries, and Turkey was one step further on its road to the West.

Jan Felix Engelhardt is researching into Turkish-Israeli relations for his Masters at the School of Middle Eastern Studies at Leiden University, the Netherlands.

Turkey and the EU
A White Gentlemen's Club
The European Union will lose credibility with the rest of the world if it doesn't manage to integrate Turkey fully, says Şeyla Benhabib, professor of political philosophy at Yale University

END_OF_DOCUMENT_TOKEN_TO_BE_REPLACED
Social media
and networks
Subscribe to our
newsletter