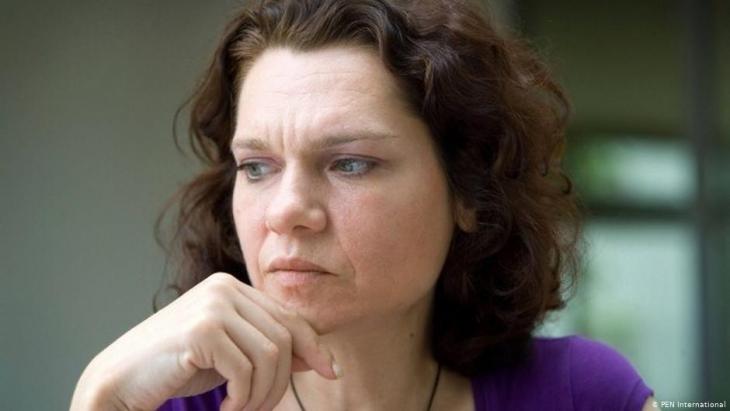 "The things I didn’t say"

The Turkish author Asli Erdogan has been living in Germany for the past two years. In Turkey, she is still on trial. Now a wrongly-translated interview has triggered a smear campaign against her. Gerrit Wustmann spoke to her

You recently gave an interview to the Italian newspaper La Repubblica, parts of which appeared, wrongly translated, in Le Soir in France – and after that, a smear campaign began against you in Turkey. What happened there?

Asli Erdogan: The reactions came from all sides: radicals, the right, the left, the mass media. It was a nationwide witch hunt.

To what extent did people on the political left react?

Erdogan: Their reaction was nationalistic, the same as those on the right. They accused me of badmouthing Turkey in order to win approval in Europe.

And what were the misleading quotes?

Erdogan: I spoke to Marco Ansaldo from La Repubblica. Turkey had just begun its latest attacks in Syria. He was on the Turkish-Syrian border, where he’d interviewed me a few years ago when I and some other authors took part in a peace protest. He phoned and asked if he could talk to me. Times of war are hysterical wherever you are, and particularly so in Turkey. So I gave him what was, for me, a restrained interview.

He wanted to know where all the Turkish support for this war comes from, and why even the opposition is behind it. I said that in order to understand that, we have to look at our education system, which is very chauvinist and militaristic. We began our school day by affirming our Turkishness. And at one point I said something that hardly anyone took notice of: I said we have to explain to young people that they’re not dying for a country; they’re dying for a government. Then he asked why the Turkish parliament is so against the Kurds. He was trying to be provocative, and I was trying to pour oil on troubled waters. So I said: because all the parties in parliament tend to regard all Kurdish organisations as terrorists.

The headline under which the interview appeared, in speech marks, so it was marked out as a quote, was: "We are being indoctrinated against the Kurdish enemy”. What I said was: we are being indoctrinated against the enemy. An abstract enemy. I corrected that in several interviews: in our education system, there were no Kurds, no Armenians. They didn’t exist. We knew nothing about them. This refusal to acknowledge people is possibly even worse than hatred. "I am a Turk, I live for Turkey” – a fifth of the children who had to recite those words every day were Kurds.

Eight days later, a translation of the interview appeared in Le Soir...

Erdogan: And in those eight days, the Frankfurt Book Fair took place. And of course, I was also asked about the situation in Syria there. I said I was ashamed of what Turkey is doing. Afterwards, a Turkish man came up to me and said: "We’ll see each other again, Asli Erdogan!"

Erdogan: I wouldn’t describe it as a threat. I can’t say anything I can’t prove. But it felt like one. And then Le Soir came out, and they translated the headline – which was already wrong – as: "We were indoctrinated with hatred of Kurds”. And then a terrible sentence turned up in this piece, something I certainly never said: “All the parliamentarians in Turkey, with the exception of the HDP, are terrorists”.

Has Le Soir apologised for this error?

Erdogan: Yes, they apologised. But by that time, Sputnik had already translated the interview, including that incorrect quote, into English. In all my life I’ve never received an interview request from Russia. That was the Friday evening. The next morning, seven or eight Turkish newspapers appeared with headlines like ”traitor” and ”terrorist sympathiser”, and the Turkish education ministry attacked me as well.

Do you believe that the people who are attacking you now, including on social media, have any interest in a correction?

Erdogan: In Turkey, when someone shouts: ”There’s a thief!”, people come running and lynch him. And then it doesn’t do him much good to shout: ”I’m not a thief!” The news website T24 asked me about all this on Saturday, and I put the error right. On Sunday, the same newspapers as the day before added fuel to the fire, by writing: the terrorist sympathiser denies her statements. Several media outlets, including the Turkish BBC, put out the correct quotes. But it didn’t change anything. Ahmet Hakan, the chief columnist at Hurriyet, repeated everything again on the Sunday. He was criticised online for that. People asked him if he was gunning for me, like Tahir Elci...

...the Kurdish human rights lawyer who was murdered by unknown assailants in November 2015...

Erdogan: Exactly. And on Tuesday, Ahmet Hakan was promoted to editor-in-chief. Of course, it could all be a coincidence, but how likely is that?

You’ve been in Germany for more than two years now. Did you imagine that you would go on being attacked?

Erdogan: After I left Turkey, there was a strange silence. Neither my literary success nor my political statements had any effect, which wasn’t the case for Can Dundar or Deniz Yucel, for example, who were regularly attacked. I know that – especially in times of war – you have to be careful what you say, but I don’t think the interview was especially provocative. I thought I might be attacked at some point, but not in this context. On the other hand, there was also a lot of solidarity from the Kurdish side. Kurds were talking about their schooldays on social media, and supporting what I’d said – Armenians and Circassians too. Someone said it was like a new MeToo movement. You can hate me for the things I’ve said – but please, not for things I didn’t say.

While all this is happening, there is still a legal case against you in Turkey. What’s the current status of that?

Erdogan: The case has been dragging on for three years now. Since I was released from prison two years ago, there hasn’t been much movement. Every four months my lawyers go to a court date that lasts barely fifteen minutes before it is adjourned again. There’s nothing I can do but wait it out.

We’ve spent a lot of time talking about politics – as is so often the case when you give interviews. We sometimes risk forgetting that you’re an author. Your novel The Stone Building came out this year in German translation for the first time. What effect does it have on you, the fact that politics always seems to get in the way of literature?

Erdogan: There are some exceptions. I spent three hours talking about literature to ORF. But you’re right, that doesn’t happen very often. There’s a lot that bothers me about it, but there are things that bother me more. Gender inequality, for instance, and orientalism. Those things are a lot harder to fight. When I meet German journalists, they usually see the woman who was in prison, not the author. Not everyone, of course; there are exceptions. But the perspective of the general public is similar: why we should we ask Asli Erdogan about literature? We want to hear about her little prison cell! In that, there is exoticism, orientalism, hubris. On the other hand, literature isn’t as exciting as politics, and newspapers have to fulfil expectations. Most people aren’t especially interested in literature. Who wants to read a poetic text about torture? What I’ve learned is that the image other people have of you is fragile. An image you’ve been working on for twenty years can be destroyed in two hours. I can’t change that.

Mikhal Dekel’s father was part of a contingent of Jewish children who went on an odyssey from Poland to Iran as a result of the Holocaust. Dekel has now written a book exploring ... END_OF_DOCUMENT_TOKEN_TO_BE_REPLACED

The protests against police violence in the USA have triggered a discussion in Germany about discrimination, immigration and the country's image of itself. Why are people who do ... END_OF_DOCUMENT_TOKEN_TO_BE_REPLACED

Journalist Michel Abdollahi was born in Tehran in 1981 and moved to Hamburg in 1986. His big breakthrough came with his television documentaries on social issues such as ... END_OF_DOCUMENT_TOKEN_TO_BE_REPLACED

From Syrian war crimes to U.S. hypocrisy in the Julian Assange case, the global "erosion of human rights standards" is of critical concern, UN Special Rapporteur on Torture Nils ... END_OF_DOCUMENT_TOKEN_TO_BE_REPLACED

Iran’s contemporary poets are less well known in Germany than the old Persian classics. Kurt Scharf has now translated 32 of them into German. Marian Brehmer dipped into the ... END_OF_DOCUMENT_TOKEN_TO_BE_REPLACED

END_OF_DOCUMENT_TOKEN_TO_BE_REPLACED
Social media
and networks
Subscribe to our
newsletter