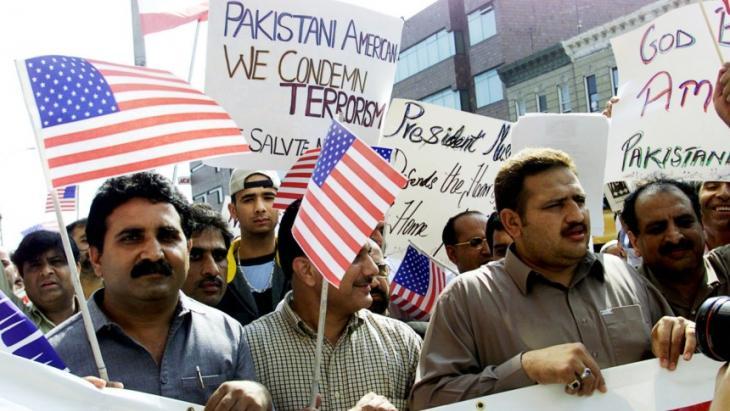 NSA spied on prominent US Muslims

After 9/11, every Muslim was a potential suspect. Under President George W. Bush, the FBI and NSA read the e-mails of Muslim lawyers and activists even though they had no convictions and there was no evidence that any of them had committed a crime, called for jihad or sympathised with al-Qaida. Even a Department of Homeland Security employee was under surveillance. By Matthias Kolb

As a boy, he dreamed of being a pilot and flying with the navy flight demonstration squadron Blue Angels. His poor eyesight ruled that out, but after studying law in Washington DC, he joined the navy's JAG Corps. Later, the Republican worked for an NGO, sent his children to Catholic schools and worked for George W. Bush's government from the end of 2001. He spent years at what later became the Department of Homeland Security and had access to confidential documents due to his top secret security clearance.

"I did everything a good citizen ought to," says Faisal Gill, who returned to working as a lawyer in 2005 and was also a candidate for the Virginia House of Delegates. He and his parents came to the USA from Pakistan when he was eight years of age, but that was never a barrier for his career. Now, however, Gill sees the world through different eyes. Documents from the US secret service NSA, which Edward Snowden copied and passed on to the journalist Glenn Greenwald, contain two e-mail accounts belonging to Faisal Gill, which the FBI and NSA monitored for three years.

In a long article for the online magazine "The Intercept", Greenwald has now analysed Snowden's Excel table, which reveals that the Federal Bureau of Investigation and the National Security Agency spied on a total of 7,485 e-mail accounts between 2002 and 2008. Alongside Faisal Gill, four other prominent Muslim Americans are on the list, people very present in the public eye who often shared platforms with leading Democrat and Republican politicians. There was no evidence that any of them committed a crime and they did not call for jihad or sympathise with al-Qaida. Nevertheless, they still seemed suspect to security agents.

These cases, on which the US Justice Department has not yet issued a statement, not only show once again that the US secret services have a broad latitude when it comes to getting surveillance warrants from the FISC court in its closed hearings. They also illustrate the mood in America after the attacks on the World Trade Center and the Pentagon: no agent or police officer wanted to make a mistake and expose themselves to the accusation of not being careful enough.

And because President Clinton had rejected monitoring Muslim Americans, there was a feeling in the security agencies post 9/11 that they had a lot of catching up to do. Some seemed obsessed with the idea that the Muslim Brotherhood had infiltrated US authorities.

A Muslim who – like Faisal Gill in 2006 – met up in Sudan with relatives of victims of the local al-Qaida violence, for instance, to offer legal support, made himself a suspect (other US legal firms also active in Sudan were not deemed suspicious, incidentally). And the NGO for which Gill worked before his time with the government was not a business association but the American Muslim Council.

The new revelations will no doubt strengthen the feeling among America's Muslims that they are seen as second-class citizens and are under permanent suspicion. Just this April, the New York police force closed down its "Demographics Unit", which had systematically spied on Muslims for years, keeping track of where they eat, work and pray. The fact that Muslims were described in an FBI training document as "Mohammed Raghead" is insensitive at best – or downright racist.

In a video interview with "The Intercept", Faisal Gill gives an impressive account of how upsetting the case is for him. Describing himself as a "very conservative, Reagan-loving Republican," he says, "If someone like me can be surveilled, then some other people out there I can only imagine." For Gill, the matter is clear: America must change its surveillance policy and tighten parliamentary control over the secret services.

Groups such as the American Civil Liberties Union (ACLU) have been issuing similar calls for some time. ACLU executive director Anthony D. Romero has compared the recently revealed activities of the US authorities with the spying on black activists like Martin Luther King ordered by FBI chief J. Edgar Hoover. After his famous "I have a Dream" speech, "every movement" made by the civil rights activist was noted in tens of thousands of memos, as the historian David Garrow puts it.

The cases of the four other prominent US Muslims are also remarkable, although not quite as striking as that of Faisal Gill, whose e-mails were intercepted although he had worked for the US administration and had, therefore, been subjected to the strictest background checks.

The four prominent Muslims contained in Snowden's Excel table and the many nameless citizens also spied upon are likely to agree with Nihad Awad's warning: "If we do not speak up against the abuses of the NSA surveillance, if we do not stop the abuse of targeting people because of their religious identity and their First Amendment activities, if we do not stop this, if we don't speak against it, if we do not ask questions, it's just a matter of time to come to you as it has come to us."

Home
Print
Newsletter
More on this topic
Muslims in America: New Wave of Anti-Islamic SentimentIslamophobia: Evidence Does Not Support Fears of Islam in the WestJohn R. Bowen's ''Blaming Islam'': Deconstructing PopulismImam Talib Abdur-Rashid on American Islam: Islamophobia as an Integral Part of the Political Platform
Related Topics
9/11, Democracy and civil society, Freedom of the press, Islam and the West, Islam in the U.S., Muslims in the West
All Topics

After a period of relative calm, the conflict in Syria is reigniting the tensions between Sunni and Shia Muslims in Pakistan: groups from both sects are involved in the clashes in ... END_OF_DOCUMENT_TOKEN_TO_BE_REPLACED

How can we truly appreciate the richness of cultures not our own? In her recent book "What is Islamic art? Between religion and perception", art historian Wendy Shaw explains the ... END_OF_DOCUMENT_TOKEN_TO_BE_REPLACED

Yemen's Arab Spring uprisings led to a raging civil war that has inflicted immense suffering on the population for the past seven years. Will the United States' halt on arms sales ... END_OF_DOCUMENT_TOKEN_TO_BE_REPLACED

The Islamic Republic of Iran has been subject to sanctions ever since its creation in 1979. The more the regime has entrenched itself and expanded its power in the region, the ... END_OF_DOCUMENT_TOKEN_TO_BE_REPLACED
Author:
Matthias Kolb
Date:
Mail:
Send via mail

Share:
Topics:
9/11, Democracy and civil society, Freedom of the press, Islam and the West, Islam in the U.S., Muslims in the West
Print:
Print article
Countries:
USA
Permalink:
https://en.qantara.de/node/18090

END_OF_DOCUMENT_TOKEN_TO_BE_REPLACED
Social media
and networks
Subscribe to our
newsletter