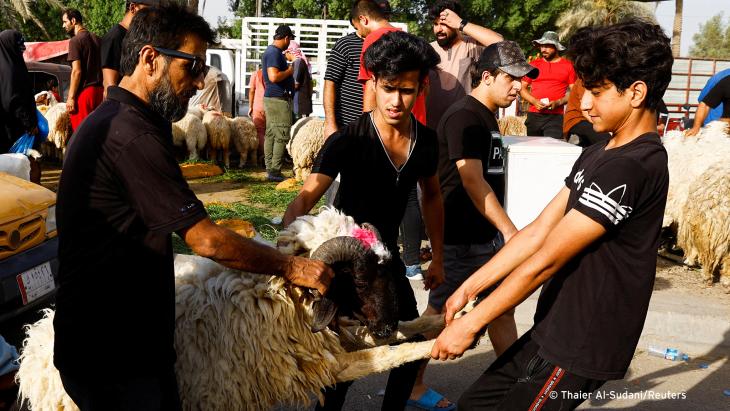 The Eid ul-Adha festival should be the busiest time of the year for Mahmoud Abu Holy, a livestock merchant in the Gaza Strip. But soaring prices have driven away many of the people who would usually buy a sheep or goat to sacrifice on the Muslim holiday.

Just a few days before Eid ul-Adha begins on Saturday, Abu Holy says he cannot afford to cut prices because of the sky-rocketing cost of animal feed – a side effect of the Ukraine war which has jolted global agricultural markets.

"We stand here the whole day without selling any of our animals," said Abu Holy, struggling to find buyers at Khan Younis market in southern Gaza.

Mohammad Issa, 24, decided against buying once he discovered how much a sheep would cost. "Last year I bought a sacrifice for $300, today I found out it would cost $500 or $600 so I decided I wouldn't do it," he said.

Eid ul-Adha, one of Islam's two main festivals, marks the climax of the annual haj pilgrimage, when Muslims slaughter animals to commemorate the willingness of Ibrahim, or Abraham, to sacrifice his son on God’s command, often distributing meat to the poor.

But this year people in many Arab countries say higher prices mean they cannot afford the important tradition, reflecting the impact of the Ukraine war which has piled more pressure on already high global food prices.

"I came to check the prices and whether we will be able to buy or not. But the prices are unbelievably very high compared to the last year," said Hamoud al-Asri at a market in Sanaa, Yemen, where a ceasefire earlier this year has brought respite from seven years of war, but millions still face hunger. "I am leaving, I can’t afford it."

At a market in Egypt, the Arab world's most populous country, one merchant said sheep prices had gone up by 50% to 90 Egyptian pounds ($4.77) per kilo. "We are not able to find buyers. I can sell the kilogram for 70 pounds but I need to find someone to buy from me, what else shall I do?" he said.

Russia invaded Ukraine in February in what it calls a "special operation". With the two countries accounting for one-third of global cereal exports, the war has fuelled surging prices for grains, fuel and fertilizer, of which Russia is a major exporter.

Mahami Chikh, who sells livestock in Algeria, said costs had driven up prices: "It's barley, it's food, it's maintenance."

"It's a very big number for an employee getting paid 1.5 million or 2 million (a month)," he said.

Ali Farhan, 23, said he had postponed buying a washing machine to get a sheep instead.

"I spent all morning searching for an affordable price to buy a sheep to sacrifice for my dead mother, and eventually found a small, skinny one that cost me 350,000 Iraqi dinars, which used to cost around 200,000 dinars."    (Reuters)

More on this topic
Qantara photo essay: The festival of Eid-ul-Adha – a time of prayer and celebrationEid ul Adha – Festival of Sacrifice: Muslims and activists lock horns on animal slaughterUkraine war and the Middle East: Will the wheat crisis bring more food independence?Russia's invasion of Ukraine: What impact on the Arab world?
Home
Print
Newsletter
MoreAll Topics

END_OF_DOCUMENT_TOKEN_TO_BE_REPLACED
Social media
and networks
Subscribe to our
newsletter