The Egyptians have long been considered a peaceable, patient people. However, contrary to appearances, the recent protests have not materialised out of thin air. Egypt is much further down the line than we like to think, writes Stefan Winkler 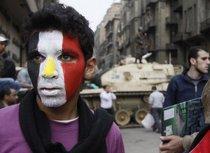 The will to express themselves: young Egyptians want to openly articulate their hopes, worries and yearnings, and no long want to be bullied by representatives of the regime, writes Stefan Winkler

​​The extent and the intensity of the protests in Egypt have surprised many people both in Egypt and abroad. Were the Egyptians not a peaceable, almost phlegmatic people, whose last great rebellion took place against the British in 1919? Considering the events of recent years and their consequences, the question must be why the powder keg did not ignite much earlier.

Historic events are subject to contingency. The direct catalyst was certainly the Tunisian coup. Foundations were laid via online networks, primarily via Facebook. Events then took on a momentum of their own – a momentum that was significantly boosted by media dissemination.

There are almost 1,000 satellite channels in the Arab world, as well as social networks, blogs, text messaging and mobile phone video clips that can be swiftly uploaded to YouTube. It was no wonder, therefore, that one of the first things the Egyptian regime did was to almost completely shut down these systems. But it was already too late.

Huge loss of faith in the state

The "Egyptian Spring" does have a genealogy; the protest has not materialised out of thin air.

The malaise has been steadily increasing in recent years, with protesters expressing their dissatisfaction at rising prices for basic foodstuffs, widespread corruption, despotism and police violence, a lack of job prospects, a flawed education system, political repression and electoral fraud. Several major accidents involving trains and ships led to vehement discussions over those responsible and their failures.

Khalil al-Anani, an expert on political Islam, described this loss of faith in state institutions and the increase in social tension in the newspaper al-Hayat as far back as July 2008.

​​The governing National Democratic Party (NDP) apparently won 95 per cent of the vote in the last election in November/December 2010. After parliamentary elections in 2005 – which were slightly more open than previous ballots, but were accompanied by violent clashes – the screw was tightened again in 2010, leaving the opposition practically empty-handed.

There had already been electoral fraud on a massive scale in 2005. Mubarak claimed 89 per cent of the vote in the presidential poll, although there was barely any evidence of public support for him.

The Egyptian Movement for Change, "Kifaya" (Enough), which was founded in 2004 and initially focussed its attention on fighting against a fifth term in office for President Mubarak, organised numerous rallies across the country.

2006 and 2007 saw an increased number of strikes in response to the privatisation of state enterprises, which culminated in a large-scale protest by textile workers in the city of al-Mahalla al-Kubra on 6 April 2008. The "6th April Movement" was born, and the Egyptians became accustomed to protests and demonstrations.

The independent press was often harassed, with detentions and fines repeatedly meted out to journalists and newspaper publishers. Blogger Kareem Amer from Alexandria had to spend four years in prison for insulting Islam and the president; he was only recently released.

The case of Khaled Said became a thorn in the side of the regime. The young Alexandrian was beaten to death at a police station in Alexandria on 8 June 2010. A photograph of his horribly disfigured face was disseminated via Facebook. Thousands took to the streets in response to protest against police violence.

Victim of brutal police violence and a thorn in the side of the Egyptian regime: the young Alexandrian Khaled Said was beaten to death at a police station in Alexandria on 8 June 2010

​​But Facebook didn't just facilitate the organisation of demonstrations, it also paved the way for far-reaching socio-cultural change. In the summer of 2007, only 70,000 Egyptians were on Facebook, just a few months later it was 500,000. Today, more than five million Egyptians use the social networking site. But just how exactly do these changes manifest themselves?

In a society that does not tolerate social and cultural views that challenge the status quo, the Internet presents many possibilities. It shows people that they are not alone, that there are like-minded individuals out there; it provides a platform for the exchange of views with those like-minded individuals and for the establishment of local, national or international networks.

The relative anonymity provides users with the security to express themselves more freely. It provides both access to inspirational figures and a window on the situation in other countries. And of course, users can arrange to meet up – either virtually or physically.

Arabic is now a fully integrated Internet language, which means that those who are not familiar with a foreign language are not excluded. Users are a reflection of Egypt's demographic: More than 50 per cent of the country's population is under 25, a generation that worries about its professional prospects and is frustrated by the insufficient opportunities for political and economic participation.

Subcultures have formed through the process of socio-cultural change. These subcultures – whether they be Islamists or secularists, rappers, break-dancers, homosexuals, emos or heavy metal fans – are networking. Anyone recalling the Egypt of the 1990s will realise just how disparate modern society has become there.

The consequences of this change are also evident in the cultural sphere: young filmmakers, musicians and writers make successful and effective use of the social networks to publicise their events and latest projects. 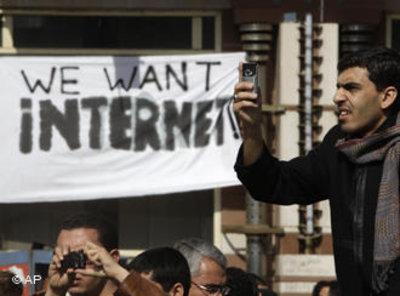 According to Stefan Winkler, the Internet has become vitally important for Egyptians as it provides a platform for the exchange of views with like-minded individuals and for the establishment of local, national or international networks

​​The young literary scene is booming. It utilises a language, often inflected with dialect and youth slang, that the readers – most of whom are of the young authors' generation – can fully relate to and understand. It also addresses issues that effect young people's lives.

New cultural vehicles of expression are taking root: graphic novels such as the comic Metro by Magey El Shafee or blogs that appear as books, such as I want to get married! by the young female blogger Ghada Abdelaal. A novel based on experiences in the drugs underworld could only be self-published, but it was advertised on the Internet, became a best seller and is now being turned into a film.

These are examples of the creative outpourings of a generation that openly articulates its hopes, worries and yearnings, young people who are no longer allowing themselves to be bullied by representatives of the regime. They have reached the end of their tether.

Syria, Egypt, Saudi Arabia and the UAE are among those countries increasingly misusing cybercrime legislation to silence dissent and curb freedom of speech. Could a new global ... END_OF_DOCUMENT_TOKEN_TO_BE_REPLACED

Egypt hopes to jump-start the action needed to face a warming world when it takes the presidency of major UN climate talks in November, but warns that countries need a "reality ... END_OF_DOCUMENT_TOKEN_TO_BE_REPLACED

A ceasefire has been in effect in Libya for the past year and a half. Yet after Russia's attack on Ukraine, another proxy war looms in Africa's most oil-rich country. Mirco ... END_OF_DOCUMENT_TOKEN_TO_BE_REPLACED

It is the biggest order in the history of the Siemens Group: a 2,000-kilometre railway network for high-speed trains is to be built in Egypt. But the project raises numerous ... END_OF_DOCUMENT_TOKEN_TO_BE_REPLACED

Archaeologists have discovered 250 sarcophagi and 150 bronze statues during excavations in the necropolis on the western bank of the Nile. ... END_OF_DOCUMENT_TOKEN_TO_BE_REPLACED

The lack of grain supplies from Ukraine is forcing Egypt to act. Now even the Toshka project is being revived to grow grain in the desert. Birgit Svensson travelled to see it END_OF_DOCUMENT_TOKEN_TO_BE_REPLACED
Date:
Mail:
Send via mail

END_OF_DOCUMENT_TOKEN_TO_BE_REPLACED
Social media
and networks
Subscribe to our
newsletter