"Dogru Mu?", which roughly means "Is it true?" is the name of a new app designed to help users check the veracity of news stories. In Turkey, such fact-checking is not new. What is novel and extraordinary, though, is who is behind this project.

"This platform, which we will launch very, very soon, will be one of our robust tools in the fight for truth," says initiator Fahrettin Altun.

Altun is a powerful man in Erdogan's Turkey. He is Director of Presidential Communications and thus has a great deal of authority over what is published in the Turkish media – and what must never appear there. Erdogan has managed to bring the press, radio and television largely in line. Fahrettin Altun is there to make sure that this does not change.

In Altun's worldview, enemies at home and abroad are threatening the country. Controlling information flows is therefore "a matter of national security," the Erdogan confidant says. Altun cites the Kurdish PKK and  the Gulen movement, which Ankara blames for the failed 2016 coup attempt, as the main sources of menace.

"Our country will be at the forefront of the fight for truth in communications, just as it has become the voice of the voiceless and the oppressed under the leadership of President Erdogan," the pro-government Daily Sabah newspaper quoted the communications director as saying. 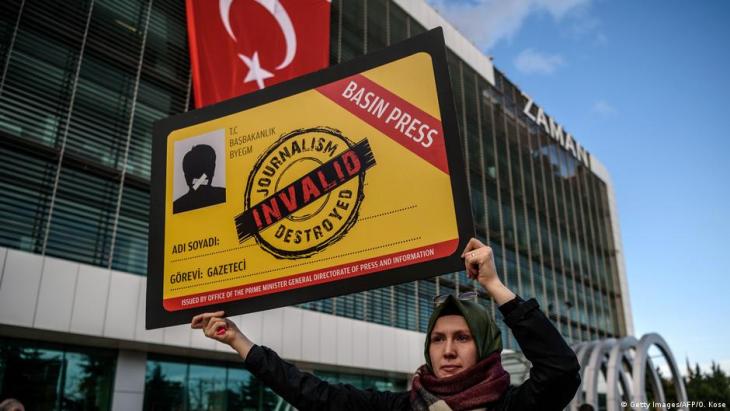 Erdogan admonished by Turkish court: one of Turkey's highest courts – the State Council – recently ruled that the Communications Authority, which is subordinate to President Erdogan, cannot continue to deny accreditation to correspondents on vague or arbitrary grounds. According to a report by Reporters Without Borders, an estimated 95 percent of Turkey's media are under government control. The difficulty of accessing press credentials is another obstacle for journalists. Because accreditations are confiscated by the government, expire, or applications go unanswered, many journalists are unable to pursue their work

The information portal Al Monitor reported that Ankara's official fact-checking app will deal primarily with online content. This comes as no surprise, because criticism of Erdogan in Turkish is particularly widespread on the internet.

Independent observers have greeted the "Dogru Mu?" project with a mixture of disapproval and sarcasm. On social media, many have compared it to the "Ministry of Truth", the institute responsible for propaganda, disinformation and the systematic distortion of facts in George Orwell's novel 1984. "Big Brother" and the Party are always right in the totalitarian society Orwell accurately and in part prophetically envisions in his dystopian novel.

"This app can be expected to label everything that official sources describe as correct as truthful and everything else as false," commented Faruk Bildirci, who once worked as ombudsman for the daily paper Hürriyet.

In the face of an increasing number of false reports and targeted disinformation campaigns, a number of Turkish organisations are engaged in checking information published in the media for its veracity and making the results of their fact checks accessible to the public. Exposing and documenting falsehoods is also the mission of today's leading initiative in this field, Teyit.org (meaning "verification"), launched in 2016.

It is still too early to pass judgement on the government app, says Can Semercioglu of Teyit.org. But the organisation has fundamental reasons for rejecting the project out of hand. "In principle, it's a disturbing development when government agencies engage in fact-checking."

There are various models for verifying the truthfulness of journalistic content – both in editorial offices and beyond. One variant would be to appoint an ombudsperson. Another model – adopted in Germany, for example – is to set up a Press Council. The media appointed this fact-checking authority as a method for voluntary self-regulation, and the Press Council furthermore ensures compliance with journalistic standards. What is paramount here, says Can Semercioglu, is that the government is not involved. In the case of the planned Turkish app this is obviously not the case.

"Dogru Mu?" is just another – and possibly the most bizarre – attempt by the Erdogan government to assert sovereignty of opinion in a dynamic media environment. Compared to other tools used by the conservative regime, the app is a comparatively mild one. If they want, users can just look the other way.

Unfortunately, this kind of freedom is not possible for the 60 journalists  who, according to IPI data, are currently being held in Erdogan's prisons.

On 15 June, the "Islamkolleg" in Osnabruck officially launched its new training programme for imams in German. The college is intended to prepare Islamic theologians for their ... END_OF_DOCUMENT_TOKEN_TO_BE_REPLACED

Turkey's parliamentary and presidential elections are scheduled for June 2023. But they are already casting a shadow. While the opposition is calling for early elections, ... END_OF_DOCUMENT_TOKEN_TO_BE_REPLACED

By stage-managing his re-election in a poll widely dismissed as a farce, Syria's President Bashar al-Assad has killed two birds with one stone: he has forced his compatriots to ... END_OF_DOCUMENT_TOKEN_TO_BE_REPLACED

Recep Tayyip Erdogan, disappointed by the European Union’s reluctance to integrate Turkey into its ranks, has re-directed his country’s diplomacy toward the Maghreb and Africa to ... END_OF_DOCUMENT_TOKEN_TO_BE_REPLACED

Although a unity government was formed in Libya in March 2021, tensions and possible crises between the political actors are already emerging. What problems does the country face ... END_OF_DOCUMENT_TOKEN_TO_BE_REPLACED

END_OF_DOCUMENT_TOKEN_TO_BE_REPLACED
Social media
and networks
Subscribe to our
newsletter