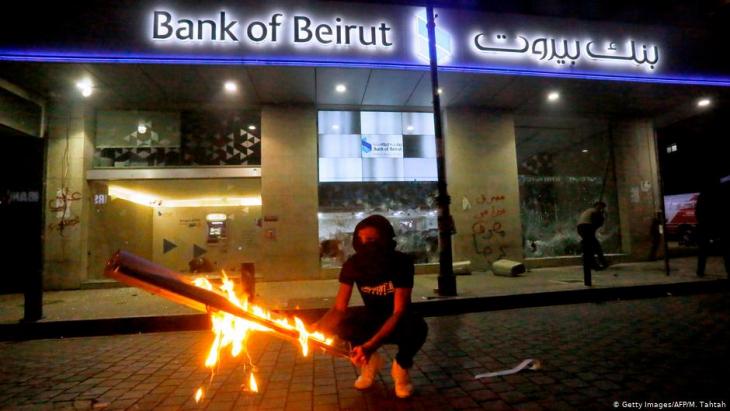 In Lebanon, the local currency has slumped to a record low, people are losing their jobs and the price of food is skyrocketing. Despite the threat posed by the coronavirus, hundreds are taking to the streets in protest. Julia Neumann reports from Beirut

The price of halloumi has only gone up by just under 20 percent. The salty, rubbery cheese is one of the few foodstuffs in Lebanon not to have experienced a price explosion. Lebanon doesn’t produce much apart from cheese and olive oil, however. Rice, fuel and headache tablets need to be imported and paid for at the usual global market prices.

For years this hasn’t been an issue, as the local currency has been pegged to the U.S. dollar with a fixed exchange rate since 1997. But because the economy is stagnating, there’s a lack of foreign currency and dollar reserves in Lebanon are shrinking, the local currency is rapidly losing value. The limit on dollar withdrawals imposed by the banks in September has also been unable to do anything to change the situation – but instead triggered a run on banks and currency exchanges. As of April, the withdrawal of dollars has been stopped completely.

Currency loses 60 percent of its value

A dollar should buy 1,500 lira. But anyone going to a currency exchange with U.S. dollars is getting more than twice as many lira as at the bank. The devaluation of the lira on the black market means the entire nation is hungry for dollars. The situation is being exacerbated by the closure of Beirut airport because of the coronavirus – not only did Lebanon’s large diaspora boost foreign currency reserves when returning from visits, business travellers also brought in dollars to pay for imports. As the possibility of bringing robust foreign currencies into the country has now been curtailed, the black market value of the lira has plunged even more rapidly.

Lebanon, a country the size of the German state of Hessen is in the grip of the most severe economic crisis in its history. 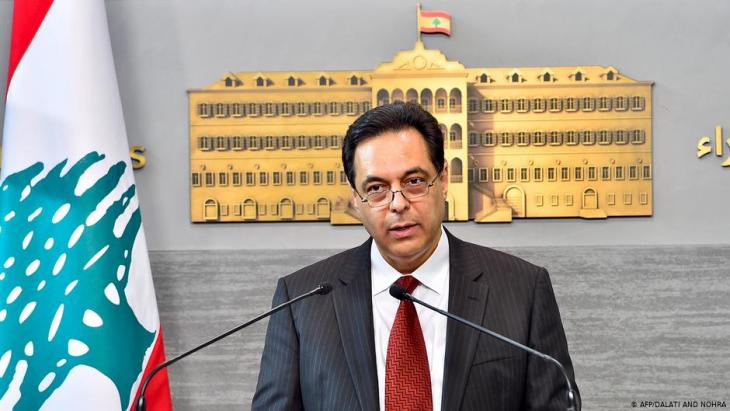 Counting on the IMF: "This is a turning point in Lebanon's history," declared Lebanon's prime minister Hassan Diab after his government submitted an application for several billion U.S. dollars in financial aid to the International Monetary Fund at the beginning of May. "We have taken a first step towards rescuing Lebanon from the financial abyss," Diab said. Lebanon is currently in the midst of its worst economic crisis since the civil war of 1975-1990

Not only do people want to safeguard their savings, they are also no longer able to afford basic supplies. According to information from the consultancy CRI, which published the Consumer Price Index for Beirut in March, the price of butter and flour has gone up by just under 45 percent in a year; sugar costs 65 percent more than in March 2019.

The catastrophic economic situation in Lebanon is the result of years of corruption, mismanagement and policies that favour the banks. Since the end of the civil war in 1990, the holders of political power have maintained close ties with the business elite. For example, the former ministerial and billionaire Hariri family has its own bank.

Policies steered a neoliberal course for years without creating a welfare net. Anyone owning money in Lebanon was better off putting it in a bank account where it would earn interest in a two-figure sum, than investing it in the productive sector. These high sums of interest paid over many years to financially-sound investors are now crippling the financial system. Levels of national debt now stand at more than 170 percent of GDP.

In March, the nation defaulted on a eurobond repayment of 1.2 billion U.S. dollars. If it is to stabilise the currency, the state needs a new influx of U.S. dollars. At the 2018 Cedar Conference, international donors such as Saudi Arabia and the EU pledged financial injections to the tune of 11 billion dollars. As a condition ahead of any cash release, they demanded economic reform and measures against corruption. But the necessary reforms were delayed.

The government has recently unveiled a five-year rescue plan, on the basis of which it applied for financial aid from the International Monetary Fund (IMF). The plan foresees billions in losses for the financial sector as well as reforms to restructure the economy. But the intended reforms to the banking system have been met with displeasure by the banks themselves. They say that the country will be torn apart by the measures. The banks are among the state’s largest creditors.

Prime Minister Hassan Diab’s response has been to blame Lebanese central bank governor Riad Salameh for the malaise and inflation. He claimed to have information pointing to the withdrawal of just under six billion U.S. dollars from customer accounts between January and February. In a one-hour televised address Salameh – who has served as central bank governor for almost 30 years – countered that politicians were wrongly ascribing the responsibility for financial decisions to him and spoke of a "campaign" against him. He said new lira to the value of three billion U.S. dollars had been "pumped" into the market to relieve the situation. 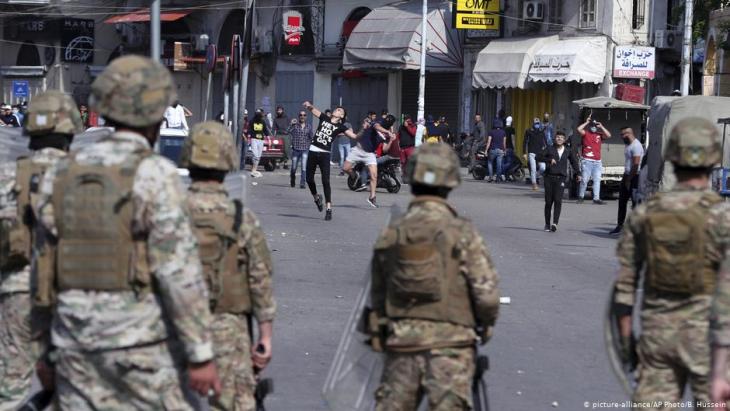 Frustration boils over: at the end of April, demonstrators attacked and set fire to banks in the Lebanese city of Tripoli. They were protesting corruption and mismanagement. Meanwhile, the Lebanese pound has lost more than half its value against the U.S. dollar on the black market. The country is at risk of insolvency. The coronavirus pandemic is proving the last straw

While the banks and head of government are locked in a spat over who is responsible for the financial crisis, that crisis is driving people onto the streets despite curfews imposed due to the coronavirus.

In late April, protesters blocked the nation’s main transport routes with burning tyres. Demonstrators threw Molotov cocktails at banks in the capital Beirut, numerous banks were damaged in the southern city of Sidon and primarily in the northern city of Tripoli. There, security forces responded with tear gas, rubber bullets and live rounds; a 26-year-old was shot dead by a soldier in the clashes. Activists then declared him to be a martyr of the revolution, his funeral was attended by hundreds of people, some of whom attacked nearby banks during the burial procession.

The uprisings can be viewed as a continuation of the mass protests that began in Lebanon in October. Then, thousands took to the streets to demonstrate against the corrupt conduct of politicians and the mismanagement that has led the nation into insolvency. They called for the "downfall of the regime", whereupon Prime Minister Saad Hariri stepped down. Hassan Diab took over his official duties at the beginning of the year.

Diab and his cabinet will have no end of trouble pulling the nation out of its economic malaise. The job is being made even more difficult by the fact that Germany has categorised Hezbollah as a terrorist organisation. The decision is likely to impede negotiations to secure financial aid, as Diab’s government is viewed as pro-Hezbollah. Germany sits together with France and Japan on the IMF task force deciding on the release of the urgently-needed funds.

Home
Print
Newsletter
More on this topic
Beirut on the brink: Regardless of corona, Lebanon is at economic breaking pointA toxic combination of sectarianism and rentierism: Lebanon's perfect stormSocial inequality in the Arab world: There is no state in Lebanon
Related Topics
Arabellion, Coronavirus, Economy, Hezbollah, Poverty, Saad Hariri, Social movements
All Topics

Lebanon is suffering from the worst economic crisis in its history, which has led to a dramatic shortage of supplies. Electricity and petrol are hard to come by. ... END_OF_DOCUMENT_TOKEN_TO_BE_REPLACED

Lebanese cartoonist Bernard Hage has made a name for himself in a very short space of time, both at home and abroad. Now he sees no future for himself in Lebanon, and is about to ... END_OF_DOCUMENT_TOKEN_TO_BE_REPLACED

A new survey by Arab Barometer adds numbers to the narrative that COVID has led to a harsher reality for women in the Middle East and North Africa. By Jennifer Holleis and Razan ... END_OF_DOCUMENT_TOKEN_TO_BE_REPLACED

The young activists from the Minteshreen movement want to provide an alternative to the political corruption of the elites. For them, the state is more important than religion. By ... END_OF_DOCUMENT_TOKEN_TO_BE_REPLACED

They’ve already got the Louvre; they’ll soon have a Guggenheim Museum as well – and now the Emirates have added literature to their quest for cultural supremacy in the Arab world ... END_OF_DOCUMENT_TOKEN_TO_BE_REPLACED

END_OF_DOCUMENT_TOKEN_TO_BE_REPLACED
Social media
and networks
Subscribe to our
newsletter