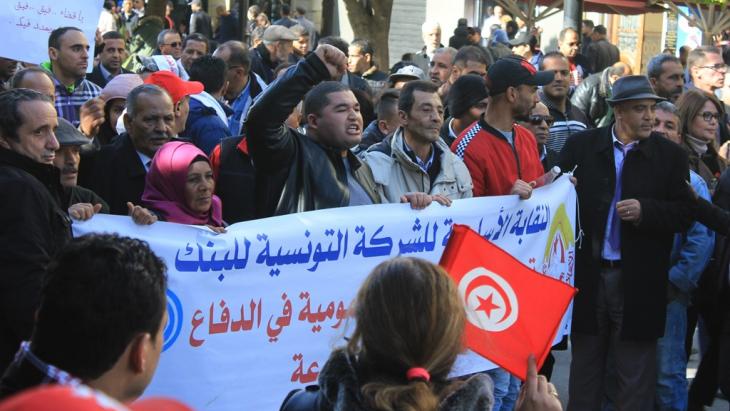 Taking on the IMF

Eight years after the Jasmine Revolution that forced the resignation of Tunisia’s ex-president Zine el-Abidine Ben Ali following almost four weeks of mass protests, the nation has come back down to earth with a bump. The initial euphoria over newly-gained social freedoms and the end of the dictatorship has long dissipated, giving way to an omnipresent sense of disillusionment – first and foremost in Tunisia’s marginalised hinterland. Unsurprisingly, social tensions have been building massively here since 2018.

Whereas coastal regions are faring relatively well thanks to the tourism industry, provinces such as Kasserine have been neglected for decades, says the president of the Tunisian human rights organisation FTDES, Messaoud Romdhani. "Kasserine is one of the country’s most underprivileged regions: the illiteracy rate is very high, there are no specialist doctors and the infrastructure is poor. Most people here live off the informal economy," says the human rights activist.

There’s also been a dramatic rise in socially or economically-motivated suicide attempts, he adds, most by self-immolation. The FTDES  documented 467 suicides or attempted suicides nationwide in 2018 alone.

"People here hoped for a certain level of social justice and expected the 2011 revolts to lead to change," says Romdhani. But very little has happened. The central government may have tried to calm the situation in Kasserine with superficial measures in a bid to gain time, but genuine structural reform was never on the political agenda, says Chafik Ben Rouine from OTE, a Tunis-based NGO specialised in economic and social policy.

IMF as catalyst for social tensions

While in the country’s interior, there are growing calls for investment and improvements to infrastructure, the government continues to keep a tight hold on the purse-strings. A 2.8 billion U.S. dollar loan from Tunisia’s most important foreign donor, the International Monetary Fund (IMF), came tied to a drastic programme of austerity. As well as a civil service recruitment freeze and wage freezes in the public sector, the programme also included painful subsidy cuts. 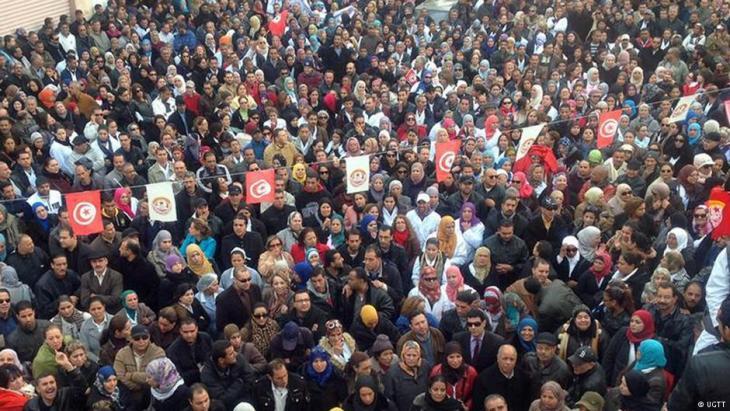 Protests against nepotism and for more social justice: the powerful Tunisian trade union federation UGTT is threatening a new general strike in the public sector, thereby increasing pressure on the government. The two-day strike is scheduled to take place on 21 and 22 February. In addition to the social consequences of the IMF austerity programme and rampant corruption, recent price increases due to the depreciation of the national currency, the dinar, and tax increases have led to growing public resentment

Economic and social policies expedited by the government since then have been aimed at stabilising the nation macro-economically, but do not offer any effective antidote to the resulting socio-economic upheaval.

In the meantime, the austerity programme imposed by the IMF has acted as a catalyst, further exacerbating the nation’s social difficulties, primarily in inland regions, while at the same time doing little or nothing to address the structural problems facing the Tunisian economy. Inflation rose to 7.5 percent in 2018 and the jobless rate exceeded 15 percent – a figure that rose to more than 30 percent among university graduates. The huge slump in the value of the Tunisian dinar, subsidy cuts and inflation pushed real purchasing power down to 40 percent in 2018.

Yet again, especially hard hit have been Tunisia’s marginalised regions, where economically and socially-motivated forms of protests continue to take on more radical forms, for example self-immolation. While those in informal employment have limited possibilities to exert effective pressure on central government, members of Tunisia’s organised workforce are increasingly adopting a confrontational course with the political leadership of the country and the IMF.

The general strike in the civil service and public sector on 17 January can be viewed as a foretaste of what the country can expect in 2019. After all Tunisia’s national trade union federation, the UGTT, which called the strike, made it clear that it is no longer willing to go along with the economic and social policies of Prime Minister Youssef Chahed.

The UGTT called on 670,000 civil servants and 200,000 employees of state-owned companies to join a 24-hour walkout to reinforce its demands for wage increases and a government climb-down over privatisation plans. The action was a success. The strike brought public services, health and education sectors, local transport and air traffic to a halt.

The cities of Sfax, Medenine and Tozeur in southern Tunisia were just as paralysed as the capital Tunis, where 7,000 people joined the main rally in front of UGTT headquarters. The strike was also supported by civic organisations such as the Popular Front, a left-wing party alliance. Its spokesman Hamma Hammami explicitly welcomed the strike call and announced the active participation of his party in the protests.

Months-long negotiations between the government and the UGTT had just been broken off without agreement. "We made concessions within the parameters of our acceptable boundaries," declared Prime Minister Chahed just before the strike. He did indeed make concessions to the UGTT over wage increases, but these were far below union expectations. 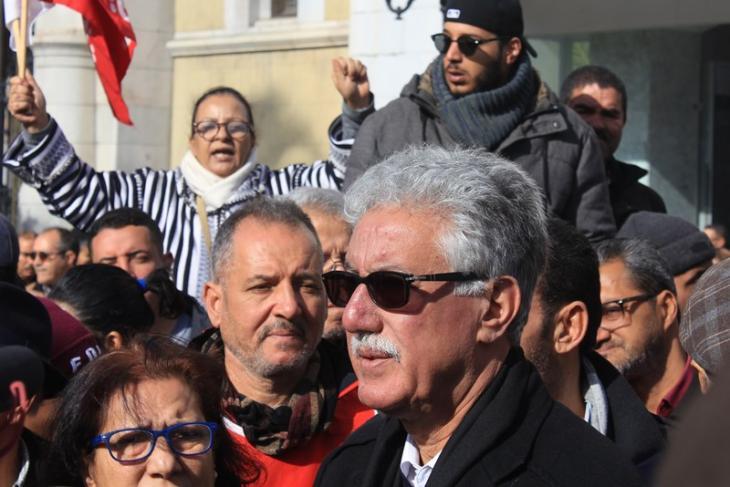 Union protests garner mass support: the nationwide general strike of last January was also supported by civil society organisations and political forces such as the Popular Front, a left-wing party alliance. Its spokesman Hamma Hammami had explicitly welcomed the strike call and announced his party's active participation in the protests

Calls for measures against corruption and tax evasion

While the UGTT holds the government primarily responsible for the failure of the talks, its protest was explicitly aimed against IMF policy in Tunisia. Because the government is bending to the directives of the Fund, the union had no other choice but to strike, UGTT Secretary General Noureddine Taboubi explained. He meanwhile blamed corruption and "methodical pillaging" for the woeful state of the public purse and called on the government to finally take decisive action against widespread tax evasion.

The government and the union are now back at the negotiating table, but should the talks fail yet again, the UGTT has announced another general strike for 20 and 21 February. With this stance, the union is showing both the government and IMF its limits and making it clear just how powerful it is on Tunisia’s political stage today.

After all, the UGTT is certainly in a position to push back IMF budget restrictions or the government’s privatisation plans, says Mohamed-Dhia Hammami, a researcher into the political role of the UGTT in Tunisia at the Wesleyan University in the United States. "The union has the capacity to make the country ungovernable. It has more members than any political party has voters."

But the success of the strike also shows that foreign creditors who insist on such reforms can encounter serious difficulties navigating the complexities of the local political scene, he says. That said, it remains to be seen whether the union really is in a position to force the government and IMF to make far-reaching and sustainable concessions.

Tunisia is considered a paragon of the Arab Spring. Despite democratic reforms, however, a mood of political frustration and economic despair still prevails, particularly among ... END_OF_DOCUMENT_TOKEN_TO_BE_REPLACED

Equality in divorce, a ban on polygamy: reformers of Islamic family law have a clear agenda. They are exploiting the ambiguity of traditional jurisprudence. By Joseph Croitoru END_OF_DOCUMENT_TOKEN_TO_BE_REPLACED

Hassan Aourid is one of the most important political and intellectual figures in Morocco. In interview with Ismail Azzam for Qantara, Aourid outlines his vision of the decline of ... END_OF_DOCUMENT_TOKEN_TO_BE_REPLACED

The Arab world is one gigantic pressure cooker. For the most part the lid of repression is on, but it is boiling over with increasing frequency. Whether in Lebanon, Iraq or in ... END_OF_DOCUMENT_TOKEN_TO_BE_REPLACED

In his new film, award-winning Tunisian director Nouri Bouzid grapples with the traumas of women held captive by Islamist extremists, victims of the so-called ʺsexual jihadʺ in ... END_OF_DOCUMENT_TOKEN_TO_BE_REPLACED

Tunisia’s parliamentary elections on 6 October – the penultimate poll before Sunday’s presidential run-off – delivered a very fragmented result without a clear majority. Whoever ... END_OF_DOCUMENT_TOKEN_TO_BE_REPLACED

Comments for this article: Taking on the IMF

As a Tunisian I don't understand this. For decades the IMF has been doing its best to help Tunisia, and other countries, develop a strong capitalist economy and "democracy". It has even had women like Namat Shafi and Christine Lagarde, help restructring the economies to achieve prosperity and liberate Tunisian women .... It seems that Tunisians do not get it.