Social Unrest in Tunisia
"We Have a Right to Work, You Robbers!"

Protests against social injustice, lack of freedom of expression and police brutality: demonstrations in the Tunisian port city of Gabes

​​Since 17 December, Tunisia has been the scene of widespread rioting. The unrest initially broke out in an economically disadvantaged region and was subsequently disseminated right across the country by protest movements. The authorities are reacting by going on the offensive and implementing a full security clampdown.

"During the 23 years he has been in power, Ben Ali has forgotten the country's inland regions. Now the people forgotten by the Republic are recalling themselves to its memory," so said economist Abdeljelil Bedoui in response to the riots that broke out on 17 December in the town of Sidi Bouzid in western central Tunisia.

He adds, "these popular protest movements started up in a region where 32.3% of unemployed people have completed further education, the highest rate in the country. These young people are treated with contempt, humiliated by the authorities; nobody listens to them, and no framework exists within which they can express themselves."

This part of Tunisia has been carefully concealed behind the country's apparently impressive economic indicators. Now, however, the anger of the people has spilled out across the country and blemished Tunisia's shiny image as an "island of economic miracle" and "successful model for developing countries", realised under the aegis of a "benevolent president".

"We have a right to work, you robbers!" This is the slogan of the revolt that has spread like wildfire across the entire country, propelling to the top of the political agenda popular concerns about corruption, which is rife among President Ben Ali's immediate circle and has percolated the entire administrative system.

The case of Mohamed Bouazizi

It all began with an act of desperation by a young unemployed graduate, Mohamed Bouazizi, who tried to kill himself on Friday 17 December by setting himself on fire in front of the seat of the Gouvernorat (prefecture) of Sidi Bouzid. On 4 January, the 26-year-old succumbed to his injuries. A crowd of about 5,000 marched behind his funeral procession, vowing to avenge his death and protesting against the government.

The police had destroyed Bouazizi's vegetable stall for the umpteenth time. He was selling vegetables as a stop-gap rather than killing time hanging around in cafés in town, scrounging a dinar (about 50 cents) off his mother to pay for the coffee. The policemen tried to extort protection money from him, as they do from all itinerant salesmen. When he refused, they punished him by destroying his produce.

Truncheons and bullets against the people: Tunisian lawyer Abdraouf Ayadi shows colleagues in Tunis the injuries he received while taking part in a demonstration in Sidi Bouzid

​​Tunisian policemen are themselves badly paid (around 300 dinars per month), and they make ends meet by extorting money from ordinary citizens. The police hierarchy tacitly encourages such practices, because it gives it a hold over its officers. It is therefore unsurprising that between 2009 and 2010, 1,300 police officers were the objects of administrative enquiries relating to corruption and abuses of power.

A police state with little freedom of expression

Nonetheless, the system is largely perceived by the population as based on corruption, right up to the highest level. A study carried out on behalf of Global Financial Integrity (GFI) revealed that the illegal flight of capital in Tunisia has risen to almost 18 billion dollars – enough to pay off the country's entire foreign debt!

The corruption rife in the president's entourage has become a subject of ordinary conversation among the Tunisian people. The WikiLeaks publications relating to Tunisia include a cable written by the former US ambassador Robert F. Godec, who wrote that "President Ben Ali is aging, his regime is sclerotic and there is no clear successor. Many Tunisians are frustrated by the lack of political freedom and angered by First Family corruption, high unemployment and regional inequities. […]Tunisia is a police state, with little freedom of expression or association, and serious human rights problems."

After Sidi Bouzid, the unrest spread to all the neighbouring municipalities – Menzel Bouzaiane, Mezzouna, Miknassi – with demonstrators shouting the same slogans against corruption and the tyranny of power.

The authorities reacted by going on the offensive and implementing a security clampdown. Ben Ali promised "to apply the full force of the law", and gave the order to fire on the angry crowds. Three young people were killed and hundreds more injured. Many of them could not be evacuated to the hospitals because the police had formed a cordon around the cities and were not allowing any traffic to pass. Hundreds of young people were arrested, and a curfew was imposed.

Over the next two weeks, solidarity movements were formed in every city in the country (Jendouba, Le Kef, Feriana, Kairouan, Kasserine, Gafsa, Djerba, Sfax, Monastir, Sousse, Tunis). There were repeated confrontations with the security forces, who suppressed peaceful demonstrations with violence.

Journalists were prevented from covering the events. Those who attempted to do their job were violently attacked or arrested. 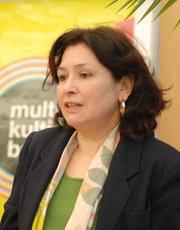 A thorn in the side of the Tunisian police state: the courageous journalist, human rights activist and upholder of women's rights Sihem Bensedrine

​​The worst to date, however, was the assault on the lawyers. On 31 December, all Tunisia's lawyers had been called upon by the independent national bar association to wear a red armband as a sign of solidarity. However, starting at dawn, the police besieged all the courts in the country and prevented the lawyers from entering their place of work. Many lawyers were attacked and injured in the process, or had their robes torn, notably in the courts of Gafsa, Jendouba, Mahdia, Djerba, Monastir, Sousse and Sfax. A very large number were injured in Tunis in particular.

The national bar association called for a strike on 6 January in response to this police aggression, which in some cases took place within the confines of the courts themselves. The trade union federation in Sidi Bouzid has also announced a general strike on 12 January.

Fearing a reaction from students and high school pupils, the police also used "preventative"" violence against schoolchildren, who went back to school on 3 January. This provoked confrontations in many towns including Ben Guerdan, Kasserine, Gabes, Gafsa, Chebba, and Thala, where they set fire to the governing party building. One thing is certain: popular anger will not be assuaged if the government continues to address the situation solely by implementing tough security measures.

Meanwhile, the European Union, which is currently negotiating advanced partnership status with Tunisia, has remained worryingly silent. On 3 January, the Euro-Mediterranean Human Rights Network (EMHRN) urged "the European Union to take a public stand on the serious human rights violations that occurred in Tunisia during the suppression of demonstrations of support for the people of Sidi Bouzid".

Translated from the French by Charlotte Collins

The journalist and author Sihem Bensedrine has for many years been a vocal activist of both the women's movement and the human rights movement in Tunisia, neither of which are officially recognized. In 1999 she founded the oppositional newspaper Kalima (Voice), which was quickly banned. Following her revelations of torture and corruption under Ben Ali's regime, she was briefly imprisoned in 2001. In 2002 she received the Johann Philipp Palm Prize for Press and Media Freedom.

Qantara.de
Defamation of Tunisian Journalist
Smear Campaigns Waged at the Lowest Level
The Tunisian journalist Sihem Bensedrine is fighting against the indescribable methods of the regime of Zine el-Abidine Ben Ali, who stops at nothing when it comes to dragging oppositionists through the mud. The Arab and Muslim world is all but indifferent to the situation. By Hamid Skif

Interview Hélène Flautre
"The EU is Not the Teacher in Terms of Democracy"
Hélène Flautre, French MEP for the European Greens, bemoans the double standards of European policy in the democratisation of the Southern Mediterranean countries. She also insists on the need to establish effective measures to pressurise them into changing

END_OF_DOCUMENT_TOKEN_TO_BE_REPLACED
Social media
and networks
Subscribe to our
newsletter