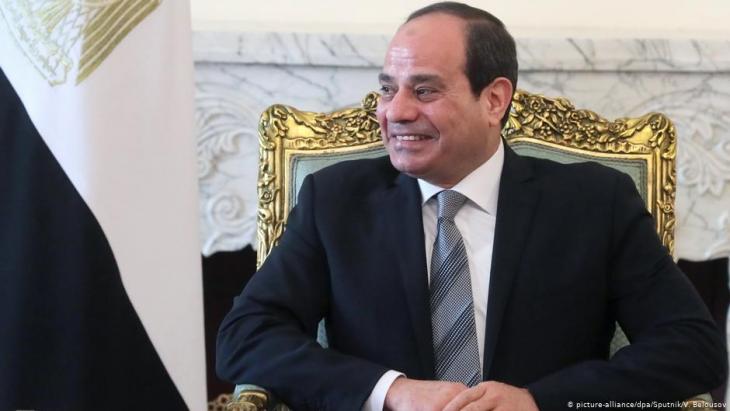 Social utopia on the Nile?

According to the Egyptian government, Egypt is once again experiencing a great civilizational awakening. A campaign aimed at producing a new multicultural identity has been launched, but the progressive slogans mask a more sinister agenda. By Joseph Croitoru

An ideological general mobilisation is taking place in Egypt. It is focussed on nothing less than the "development of the new Egyptian" – the headline of a campaign promoted incessantly in recent months by both the government and President Abdul Fattah al-Sisi in person.

This major civilizational project is being specifically aimed at the younger generation – their parents and grandparents could, however, be forgiven for regarding it with a certain amount of scepticism. After all, this is not the first time that rulers on the Nile have attempted to cultivate the ideal "new Egyptian" – and all previous attempts failed.

Gamal Abdel Nasser, for instance deployed propaganda typifying the model citizen in a bid to realise the pan-Arab vision of the unification of all Arabs – a vision that was ultimately shattered by Egypt's devastating military defeat in the Arab-Israeli war of 1967.

Initially the Islam-friendly course of Nasser's successor, Anwar al-Sadat, indirectly fostered the Islamism nascent at the time; later however, he tried to counter this trend by encouraging citizens to focus solely on the Egyptian legacy, promoting a national pride also fuelled by the achievements of the pre-Islamic Pharaonic era. But the experiment failed and when Sadat was shot dead by Islamist assassins in 1981, his killers believed the Islamic nation had been liberated from a new "Pharaoh".

Hosni Mubarak, who succeeded Sadat in office, responded with an even stronger emphasis on Pharaonism as the fount of Egyptian identity. This served primarily to legitimise his authoritarian leadership style and prop up his image as a relentless fighter against Islamist terrorism. 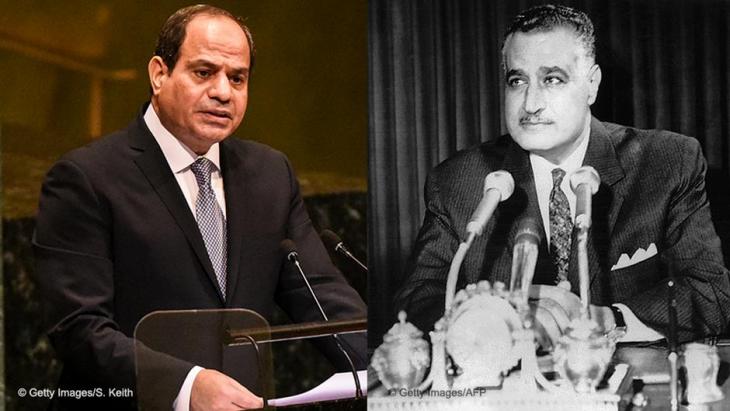 In the footsteps of his idol: Gamal Abdel Nasser promoted the "ideal being" in an attempt to realise his pan-Arab ambitions. Unlike Nasser, Sadat and Mubarak, however, Abdul Fattah al-Sisi has made it abundantly clear that he has learned from the mistakes of his secular predecessors when it comes to shaping national identity policy

The heart of the world

During their short-lived term in office, the Muslim Brothers set out to do away with this predominantly secular identity image. As we know, they didn't have time to realise their plans to re-Islamise Egyptian culture and society. It was obvious from the outset that their arch enemy Sisi, who like Nasser before him mercilessly persecuted the movement, had learned from the mistakes of his secular predecessors when it came to shaping national identity policy.

To this end, the Egyptian constitution adopted in early 2014 evoked – in almost pan-Arabian fashion – "Arabian Egypt" as the "heart of the entire world", at the same time extolling the nation as the "hub of civilisation and culture" and even as the cradle of the three monotheistic religions. Article 50, concerned with the maintenance of national heritage, also explicitly emphasises that this includes the legacy of the Pharaonic, as well as that of the Coptic and Islamic eras.

In the course of the current campaign to foster the "new Egyptian", an already far-reaching civilizational foundation is seeking to acquire more territory. The campaign draws on a political-philosophical work – "The Seven Pillars of Egyptian Identity" – which was first published in 1989 and has been frequently re-published since.

Penned by Coptic civil engineer and writer Milad Hanna (1924–2012), according to whom Egyptian identity originates from virtually all phases of Egyptian history: the Pharaonic, the Greek-Roman-Byzantine, the Arab and the Islamic.

Hanna also believed that Egypt's association with Arab, Mediterranean and African regions played a part in forming its identity. The Egyptian Copt viewed this diversity as a bulwark against fanaticism and terrorism – an interpretation that is more than welcome to the Sisi regime, which is at pains to present Egypt as a haven of peace and tolerance, in order to distract from the brutal persecution of the Muslim Brotherhood movement.

Pro-government media not only highlight the exemplary character of Hanna's recently re-published book, but also interweave it with the national project to create a new Egyptian. The daily newspaper "Al-Ahram", for example, recently devoted an entire series of articles to the subject.

One contributor Hatem Abdel Munam, a prominent commentator and environmental sociologist, repeatedly drew on Hanna's ideas concerning the openness and pronounced cultural adaptability of Egyptians, presenting state actors and institutions such as Al-Azhar University – making its contribution to the current public campaign through calls for religious tolerance – as representatives of this ideological drive to influence the nation's way of thinking.

No one appears to be troubled by the fact that, in the process, certain problematic chapters of history such as the brutal Islamist conquest of Egypt by Mohammed's contemporary Amr ibn al-As are being glossed over. This is because the true goal of the state identity campaign – one that cannot be expressed in public – is education towards societal harmony, the ability to achieve consensus and subordination within the collective, which must itself be subject to the dictates of state leadership.

Thus, in his public speeches on the "development of the new Egyptian", President al-Sisi is trying to sell the idea that this is a project for Egyptian society as a whole – and not just for the state. 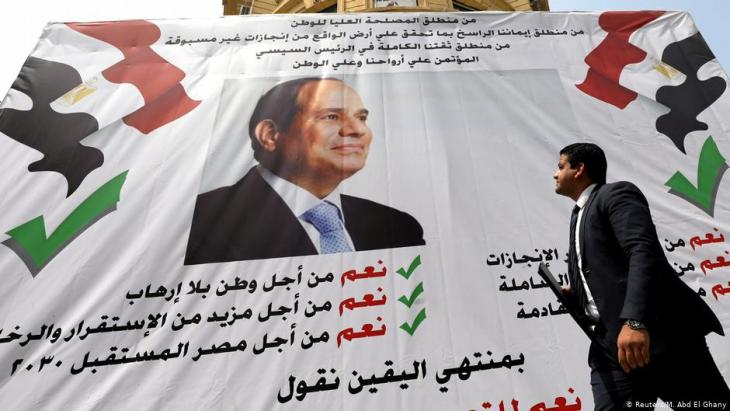 All power to the President: with the amendment of the constitution at the end of April 2019, Sisi's current four-year term of office was extended to six. In addition, from 2024, the president is allowed to serve a further term of six years. "When Sisi, in the same breath, explicitly calls on Egyptians to demonstrate a readiness to accept reforms and a willingness to make sacrifices, the suspicion inevitably arises that in truth, it is all about adapting to his own conservative world view and unconditional subjugation," writes Croitoru

But when he, in the same breath, explicitly calls on Egyptians to demonstrate a readiness to accept reforms and a willingness to make sacrifices, the suspicion inevitably arises that in truth, it is all about adapting to his own conservative world view and unconditional subjugation.

It is for the benefit of rulers then, that the much vaunted multi-faceted Egyptian identity is being exploited. Attempts to make the government's new mammoth urban development projects more palatable by referring to the architectural achievements of the Pharaohs are just one blatant example.

A commitment to the Mediterranean region, which became fashionable two decades ago and was quickly forgotten again thereafter, has been re-articulated recently to foster public acceptance of economic co-operation with currently unpopular neighbours such as Israel.

At the behest of the President, we are even seeing the restoration of surviving Jewish monuments in a country where very few Jews still remain – a move that is probably aimed first and foremost at encouraging tourism, but that can also easily be justified within the context of the new Egyptian multiculturalism campaign.

But the state-ordered enthusiasm for civilizational renewal on the Nile, which the weekly magazine "Ruz al-Yusuf" even went as far as describing as an "all-round revolution", appears not to have properly taken hold among the populace.

Education Minister Tareq Shauqi, who like President Sisi declared the campaign to be a "matter for the people", recently complained about opposition to the planned expansion of school timetables to include topics from art and culture as well as sporting activities from – of all people – parents.

In government circles and pro-government media, there is a readiness to claim that such reservations are due to a lack of information within the citizenry. This glosses over the fact that it is public servants who are the very people contributing to the general sense of unease: Culture Minister Ines Abdel Dayem has taken to presenting the opening of many new cultural institutions in the country as a by-product of the new identity campaign, although the initiative to rejuvenate and found such establishments pre-dates it.

Meanwhile, public criticism of the New Egyptian project is becoming unusually loud. The Egyptian prose writer and columnist Saad al-Qarsh may have allowed himself to criticise the contradiction between official slogans promoting pluralism and tolerance and the current lack of freedom that dominates everyday life in Egypt; but significantly, he did this writing in the newspaper "Al-Arab" which is published in London.

Recep Tayyip Erdogan, disappointed by the European Union’s reluctance to integrate Turkey into its ranks, has re-directed his country’s diplomacy toward the Maghreb and Africa to ... END_OF_DOCUMENT_TOKEN_TO_BE_REPLACED

The Egyptian series "El-Ekhteyar 2" was created by a production company with close ties to the military – and pursues a corresponding narrative. Moritz Baumstieger explains how ... END_OF_DOCUMENT_TOKEN_TO_BE_REPLACED

Looking to mobilise the Egyptians, Abdul Fattah al-Sisi and his ministers will refer to them as the "people". As soon as the Egyptians demand something of the state, however, they ... END_OF_DOCUMENT_TOKEN_TO_BE_REPLACED

The rollout of coronavirus vaccines in the Middle East and North Africa is already taking place on a massive scale, with the United Arab Emirates leading the way. Nevertheless, ... END_OF_DOCUMENT_TOKEN_TO_BE_REPLACED

Egyptian singer Umm Kulthum continuous to be an icon, almost 100 years after she published her first record. But what about the other famous women of the 1920s? In his new book, ... END_OF_DOCUMENT_TOKEN_TO_BE_REPLACED
Author:
Joseph Croitoru
Date:
Mail:
Send via mail

END_OF_DOCUMENT_TOKEN_TO_BE_REPLACED
Social media
and networks
Subscribe to our
newsletter