The Hour of the Islamists

While Somalia's interim government still can't assert its authority, Islamic groups have been expanding their power base. The radical jihad fighters are hoping the political vacuum provides them with their chance. Marc Engelhardt reports

While Somalia's interim government, established in December 2004, still can't assert its authority, Islamic groups have been expanding their power base. The radical jihad fighters are hoping the political vacuum provides them with their chance. Marc Engelhardt reports 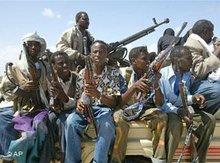 In Somalia, some Sharia courts have aligned with extremist militias, yet most courts do not espouse extremism

​​At the end of February, the thunder of anti-aircraft fire could be heard throughout the crumbling ruins of Mogadishu. The thud of anti-tank rocket launchers and roar of cannons mounted on SUVs echoed in the streets.

The inhabitants of the Somali capital, which has had no government since 1991, had not experienced such heavy combat for years. Hundreds fled residential districts to escape the ricocheting fire of the unskilled militias. At least 15 persons died.

Fighting halted after a week, but the battle is not yet over. On one side is an amalgamation of politicians and businessmen who call themselves the "Alliance against Terrorism and For the Reestablishment of Peace." The group also includes five ministers from the transitional government that was sworn in over a year ago.

On the other side stand the militias of the Islamic sharia courts.

Courts in a lawless land

The conflict between the two fractions appears to confirm the views of those who see the Horn of Africa as a refuge for the worldwide network of Islamic militants. For years, the sharia courts have been regarded as a cover for extremists.

However, Harvard University's Nikolaus Grubeck, a researcher of legal systems in failed states, acknowledges that the situation is far more complex. "Most of the sharia courts in Somalia do not espouse extremism. Their leaders expressly stress that they don't want to have anything to do with terrorists."

The traditional courts, presided over by a religious leader, a sheikh, arose in response to the anarchy and lawlessness after the departure of dictator Siad Barre in 1991. While there are no statute books in this country without a government, the sharia proved to be the only common denominator in an almost one hundred percent Muslim society.

In a political environment considered to be highly insecure and dominated by different armed militias, the sharia courts have acquired a positive reputation.

​​The courts quickly established more order and security within the various clans. As a result, ordinary Somalis, in particular, respect the courts. For the most part, the courts refrain from issuing drastic penalties, such as chopping off hands for theft. "We Somalis maintain a tolerant Islam. Such punishments violate our traditional law," explained a judge.

In order to pass cross-clan judgments in a city like Mogadishu, the courts banded together in a network, which also included an armed militia. Experts from the International Crisis Group estimate the number of militia soldiers at a few hundred, while the individual courts also have their own soldiers.

In Mogadishu, where the size of a militia determines the political weight of a group, the sharia courts became a powerful factor that could no longer be overlooked. "With their growing influence, some of the sharia courts, especially the conservative ones, have managed to free themselves from clan structures and have since become parties to the conflict," sums up Grubeck, who recently interviewed a large number of judges in Mogadishu.

The jihad movement in Somalia

One of the most influential leaders of the politicized sharia courts is Hassan Dahir Aweis, a 61-year-old member of the jihad movement's old guard. These people regard themselves as warriors in a battle against unbelievers. In the early 1990s, together with Taliban-educated Afghanistan veterans, he built up the military arm of the Al-Itihaad Al-Islaami – an organization placed on the black list of worldwide terrorist groups by the American government after September 11, 2001.

Aweis is himself a wanted terrorist. Yet Al-Itihaad, which began as resistance group to the brutal Barre regime, has found little support among Somalis in its struggle for a theocratic government. The group is constantly moving its headquarters, because neighboring clans don't want to have jihadists in the vicinity.

Two devastating attacks by the Ethiopian army against Al-Itihaad camps resulted in the deaths of most of its members. It remains a matter of contention whether the group still exists. Yet its surviving leading figures, including Aweis, continue to strive for power.

"Al-Itihaad has been transformed from an organization into an idea, which still retains its force," said an American diplomat describing the current situation. Aweis remains outspoken. "We Moslems will not support the secular transitional government. A government that does not rule according to the book of Allah deserves no support."

In addition to the old guard, a new jihad movement has established itself over the past two years. It is led by the 30-year-old sharia militia leader Aden Hashi Farah Ayro. The group, whose size observers estimate to be less than a hundred, has been connected to the murder of four foreign aid workers and dozens of Somalis who had been accused of collaborating with Western intelligence services.

Ayro, a protégé of Aweis, is said to have been trained by the Taliban and enjoys close contacts with the Al-Qaida network. "Ayro represents a disconcerting link between the jihadists, the sharia courts, and the Al-Itihaad movement," says Matthew Bryden, an analyst with Crisis Group, in appraising the latest developments.

Struggle for power on the Horn

In the struggle for power in Somalia, the Islamic groups currently display a great degree of self-confidence. This is also why members of the transitional government, the fourteenth within 15 years, take the confrontation seriously. Only recently, the militias of the sharia courts attacked a sound studio in which Bollywood films were being dubbed.

"Islamic law forbids film, music, and dance," proclaimed Sheikh Sharif Ahmed, chairman of the Union of Sharia Courts, afterwards. Hundreds of Somalis later stood bewildered for hours in front of the destroyed studio. Brydon sees this as proof of the deep dislike most Somalis feel towards the Islamists.

"What is truly remarkable is that the jihad movement has yet to find any meaningful support here – although, according to conventional analysis, the ground in Somalia is ripe for Islamists." Somalis do not want a theocracy, but rather a functioning government.

According to Brydon, the West has no choice but to provide Somalia with the utmost support in order to combat the burgeoning Islamic extremism on the Horn of Africa.

Translated from the German by John Bergeron
Qantara.de

African Refugees
From Somalia to Europe via Yemen
Every year, tens of thousands of Somali refugees cross the Gulf of Aden to reach the country on the southernmost tip of the Arabian Peninsula. While they are not turned away or sent home, their prospects in Yemen are grim. Klaus Heymach and Susanne Sporrer report

END_OF_DOCUMENT_TOKEN_TO_BE_REPLACED
Social media
and networks
Subscribe to our
newsletter