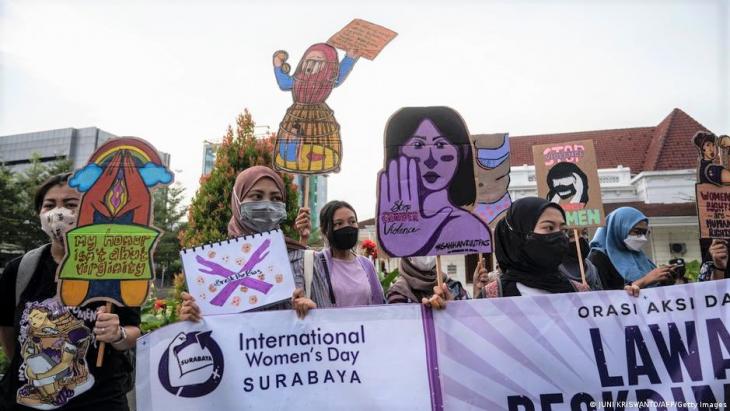 Indonesia has finally passed a bill, ten years in the making, stipulating tougher penalties for sexual violence. Yet activists maintain the country's conservative culture stifles awareness and prevents victims from speaking up. By Arti Ekawati and Betty Herlina

In mid-April, Indonesian lawmakers passed a controversial bill targeting sexual violence, a step long awaited by women's rights activists, but one that has been criticised for taking far too long. The bill had mainly been held up by one Islamic conservative party, which claimed it would violate Islamic principles, be prone to misinterpretation – and promote "free sex".

Compared to other Muslim-majority countries such as Pakistan and Bangladesh, women in Indonesia have more freedoms in the areas of self-expression and lifestyle choices. However, women's rights activists say an increase in Islamic conservatism in Indonesia is challenging these freedoms. This has been exacerbated by low enforcement of the law in cases of sexual abuse and ignorance as to what constitutes sexual harassment and how to protect victims.

Titiek Kartika Hendrastiti, a gender studies researcher at the University of Bengkulu, said the lengthy time taken to pass the bill reflects an Indonesian "dualism" when it comes to sexual abuse. People consider sexual assaults to be an offence and wrong, yet, at the same time, a disgrace, which leads many victims not to come forward.

Hendrastiti said instead of reporting a rape to the police, many people still seek "family ways" to "solve" the problem, including marrying the victim to the perpetrator. This way, a rapist is considered as "being responsible" for the victim, while "saving" the honour of the victim and their family. "There are double standards; cultural factors have driven the long delay in passing the bill," she said. 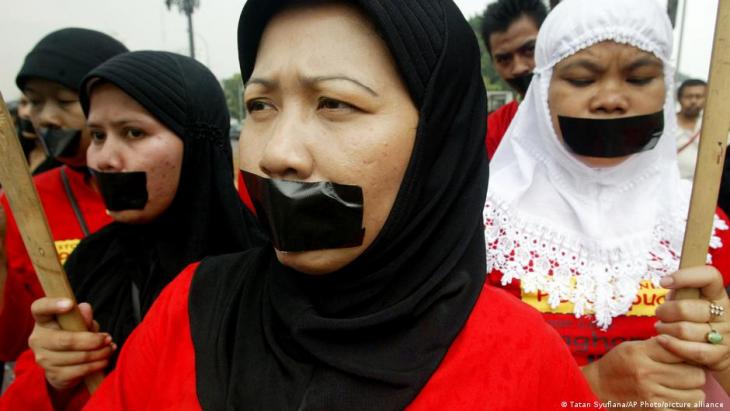 Compared to other Muslim-majority countries such as Pakistan and Bangladesh, women in Indonesia have more freedoms in the areas of self-expression and lifestyle choices. However, women's rights activists say an increase in Islamic conservatism in Indonesia is challenging these freedoms. This has been exacerbated by low enforcement of the law in cases of sexual abuse and ignorance as to what constitutes sexual harassment and how to protect victims

What does the bill change?

The sexual violence bill is meant to provide a legal basis for addressing rape and sexual harassment, including defining rape as the act of forced sex without consent. It also foresees more help and support for victims

It was introduced by the National Commission Against Violence against Women in 2012, yet it would be 2016 before the bill came up for parliamentary debate. After a long stretch and several controversies, the new legislation finally passed on 12 April 2022.

Mike Verawati Tangka, an activist with the Indonesian Women's Coalition, said she was grateful that the bill had been passed, though things could have moved a lot quicker. "It all depended on the government's political will," she said.

Tangka also welcomes the victim trust fund established by the law to compensate victims of sexual abuse and help them recover. "So far there have been no reservations regarding victim trust funds. We welcome this and appreciate the government," she said.

During the pandemic in 2020 and 2021, sexual violence cases increased in Indonesia. Data from the Indonesian Ministry of Women's Empowerment and Child Protection showed there were about 25,200 cases of sexual violence in Indonesia, up from around 20,500 cases in 2020.

Meanwhile, in 2021, several gruesome sex crimes triggered public anger, such as the rape of 13 underage girls by an Islamic boarding school teacher in West Java Province.

High-profile sex harassment cases were reported in schools and offices. In some of the cases, victims only received help after their cases went viral on social media. "We are on the verge of sexual assault emergency, therefore the bill needed to be passed soon," said women right's activist Susi Handayani.

Why was the bill delayed?

The Islamist Prosperous Justice Party (PKS) was the only party rejecting the bill. Kurniasih Mufidayati, a leading PKS lawmaker, argued that the recently passed bill could be prone to misinterpretation.

The wording of "sexual consent" before having sex was seen as problematic, as the party believes the right to sexual consent should only be applied to married people. They also questioned some points relating to sexual orientation, forced abortion and forced marriage.

However, Mufidayati reiterated that the PKS strongly opposes all forms of sexual crimes, saying it was "committed" and had helped thousands of victims.

With its traditions of neutrality and non-alignment, Indonesia has had to tiptoe around the Ukraine war debate. Pro-Russia sentiment in the region complicates Jakarta's foreign ... END_OF_DOCUMENT_TOKEN_TO_BE_REPLACED

Calls for an environmentally-conscious form of Islam are growing in Indonesia, as climate change poses enormous ecological challenges for the country. Experts say it could change ... END_OF_DOCUMENT_TOKEN_TO_BE_REPLACED

Indonesia has become a primary battleground between democratic and autocratic visions of Islam in the 21st century, with Nahdlatul Ulama pitted against Abdullah bin Bayyah, a ... END_OF_DOCUMENT_TOKEN_TO_BE_REPLACED

Research project "The Global Qur'an", brainchild of Professor of Islamic Studies Johanna Pink and sponsored by the European Research Council, analyses the history and ... END_OF_DOCUMENT_TOKEN_TO_BE_REPLACED

At a time when even some rich democracies are electing con men as their political leaders, the success of Indonesian President Joko Widodo deserves wider acclaim and appreciation ... END_OF_DOCUMENT_TOKEN_TO_BE_REPLACED

On the Indonesian island of Java, one librarian has started a mobile library, lending books to children in exchange for plastic rubbish. The idea is that they will learn to take ... END_OF_DOCUMENT_TOKEN_TO_BE_REPLACED
Author:
Arti Ekawati & Betty Herlina
Date:
Mail:
Send via mail

END_OF_DOCUMENT_TOKEN_TO_BE_REPLACED
Social media
and networks
Subscribe to our
newsletter