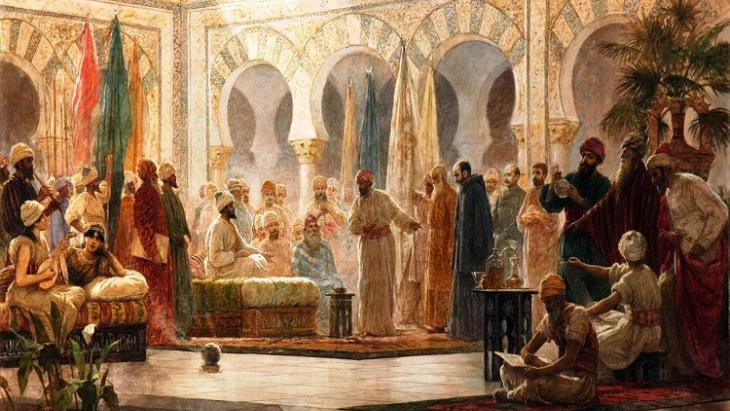 A bird's eye view of eight hundred years of history: Brian A. Catlos tells the story of Al-Andalus in the style of a streaming series and deconstructs the myths of the Reconquista and its enemies. By Andreas Kilb

Al-Andalus, Islamic Spain, is a battleground of historiography. While some praise it as a haven of religious tolerance and cultural sophistication, others emphasise its role as the engine of the African-Muslim slave trade, not to mention its ideological entrenchment under the rule of the Almoravids and Almohads.

Since the ideological masterminds of al-Qaida and IS took up the cause of reconquering Al-Andalus, the tone of the debate has further intensified. For some historians, the question of whether the Caliphate of Cordoba reached a higher level of civilisation than its Christian adversaries has become a matter of faith. The written word all too often plays host to the debate – mirrored back into the Middle Ages – of West versus East.

The American religious scholar Brian A. Catlos, on the other hand, wants to show that the Andalusian culture war was "also a story of alliances and friendships": between kings, caliphs, counts and emirs as well as between scholars, artists and ordinary people. To prove this, he covers the entire biography of Al-Andalus, which spans almost eight hundred years, with the historical lens, often from a bird's-eye view, more rarely from a street perspective. 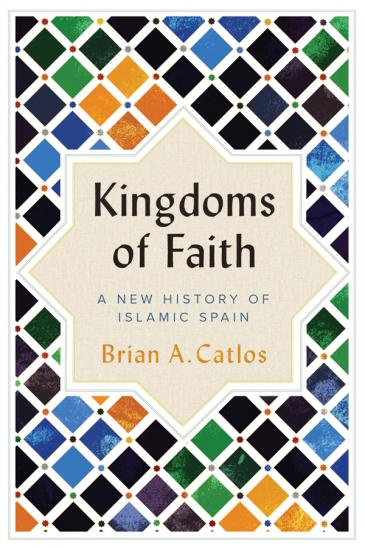 "Among some Muslim intellectuals, the eclipse of the Andalusian star triggers an exquisite kind of phantom pain. This volume provides cold comfort for such fantasies," writes Kilb. "In the Reconquista, Catlos shows, it was not the better, but the better organised, militarily superior and ideologically consolidated side that triumphed over an Islamic society weakened by clan feuds and religious disputes"

They all make an appearance, the conqueror Tariq as well as Boabdil, the last Emir of Granada, the intellectual giants Ibn Rushd, Ibn Wafid and Al-Zahrawi, the general Almanzor and the inevitable Cid.

The advantage of this linear narrative, punctuated with maps and illustrations, is that the individual phases of Al-Andalus' life unwind one after the other like episodes in a streaming series: the early expansion, the first Umayyads, the caliphate, the Taifa kingdoms, the Almoravid restoration, the Emirate of Granada, its end and the expulsion of Islam from Spain.

On the other hand, one learns too little about the historical processes and structures that bracket these epochs together.

The clans fought for their private interests

Apparently, the Visigoth nobles who ruled the Iberian peninsula until 711 were quick to collaborate with the invaders; why did they, unlike the Hispanic Church, not offer more resistance? And conversely, why did the Muslims find it so easy to incorporate Christians and Jews into their system of rule?

Abd al-Rahman III, the first Caliph of Cordoba, was the grandson of a Basque princess and the son of a Christian concubine. To appear more Arabic with his fair skin and blue eyes, he dyed his beard black. For his kind, tolerance was not only a matter of state, but a family affair.

One reason for this familiarity between the long-established and the conquerors could be the structural similarity of their social relations.

Goths, Arabs and Berbers were organised in clan structures. One of these clans, the Banu Qasi, was descended from a Roman-Gothic nobleman named Cassius who had converted to Islam.

Until the late tenth century, the territory of the Banu Qasi formed a buffer between the Christian kings of Pamplona and the emirs of Zaragoza; one of the defeats regularly inflicted on the armies of the Franks at Roncesvalles was due to them. Another clan of Arab origin, the Banu Sarraj, rivalled the ruling Nazarites for power in the Emirate of Granada in the fifteenth century.

Neither clan would have thought of waging war for higher aims: they fought for their private interests within the prevailing political climate.

Marriage alliances were not a suitable means of politics

Things were different in the urban centres on the Guadalquivir and especially in the capital Cordoba. Here, from 756 onwards, the last surviving branch of the old Umayyad caliph clan ruled over an increasingly stable power structure that was also highly developed in terms of civilisation due to the import of oriental scholarship and everyday culture.

In 929, in the face of the dwindling power of the caliphs in Baghdad, Abd al-Rahman III himself assumed their title. But by the reign of his grandson Hisham, the caliphate had already disintegrated into a dozen small states, the Taifa kingdoms.

One reason for this was that Hisham's successful commander and chamberlain Almanzor had not succeeded in deposing the weak caliph and founding a new dynasty. In Constantinople, shortly before, the fleet admiral Romanos Lakapenos had seized power by marrying his daughter to the underage emperor and saved the Byzantine Empire from the onslaught of the Bulgarians.

In Cordoba, on the other hand, marriage alliances were not a suitable means of politics because the ruler's harem, while capable of unlimited absorption, was hardly capable of establishing legitimacy. The caliphate imploded because it could not evolve. In addition, its elites had ceded army service to bands of slaves and mercenaries. Almanzor replaced them with North African Berbers. After his death, a Berber army sacked the defenceless capital.

In the Taifa period, the rulers' capacity for tolerance diminished along with their room for manoeuvre. Nevertheless, the massacre of the Jews of Granada in 1066 was not an ethnic pogrom, but the culmination of a power struggle between the followers of the Jewish vizier Joseph ibn Naghrela and the Berber dynasty of the Zirids

Catlos' overview suggests such structural considerations without making them himself. Instead, the author focuses on deconstructing the myths with which historical events became tinged in retrospect. The Reconquista, the "reconquest" of Spain by the Christians, only became a concept when their petty kingdoms gained the upper hand militarily from the eleventh century onwards.

It is a similar story with the issue of religious tolerance and its scope in Spanish Islam, over which Edward Said and Bernard Lewis disagreed. Again, political interest took precedence over ideological justification. In the ninth century, for example, the emirs of Cordoba could afford to stifle the Christian martyrdom movement in their empire through relatively mild coercive measures.

In the Taifa period, on the other hand, the rulers' capacity for tolerance diminished along with their room for manoeuvre. Nevertheless, the massacre of the Jews of Granada in 1066 was not an ethnic pogrom, but the culmination of a power struggle between the followers of the Jewish vizier Joseph ibn Naghrela and the Berber dynasty of the Zirids. Mass murders of Jews, as in Central Europe before the First Crusade or during the outbreak of the plague epidemic of 1349, never occurred in Al-Andalus: the will to exterminate was a speciality of Christianity.

Among some Muslim intellectuals, the eclipse of the Andalusian star triggers an exquisite kind of phantom pain. This volume provides cold comfort for such fantasies: for all its exuberance, the tone it strikes is too sober in detail, its perspective on events too devoid of illusion. In the Reconquista, Catlos shows, it was not the better, but the better organised, militarily superior and ideologically consolidated side that triumphed over an Islamic society weakened by clan feuds and religious disputes.

Brian Catlos will probably not be able to resolve the culture war over Al-Andalus with his book. But perhaps reading it will make it a little easier to agree on common terms of engagement.

Home
Print
Newsletter
More on this topic
La Mezquita in Cordoba: Is Cordoba denying its Islamic heritage?Spain and Ibn Arabi′s heritage: The great master of MurciaThe Maghrebʹs Moorish-Spanish legacy: Andalusia begins in northern MoroccoIbn Rushd and Maimonides in ''Out of Cordoba'': The Muslim-Jewish Heritage of Islamic Spain
Related Topics
Arab world, Book reviews, Clash of civilisation, Dialogue of Cultures | Intercultural Dialogue, Dialogue of Religions, History of Islam, History of the Near and Middle East, Islam and the West, Islamic architecture
All Topics

Known to Jews, Muslims, and Christians by three different names – Sefarad, al-Andalus, and Hispania, respectively – the Iberian Peninsula has been a centre of fertile intellectual ... END_OF_DOCUMENT_TOKEN_TO_BE_REPLACED

A heated debate is raging in the Islamic world about whether the religious and political spheres in Islam are one and the same. Before this matter can be settled, the terms " ... END_OF_DOCUMENT_TOKEN_TO_BE_REPLACED

On their fourth CD "Irade" (willpower), Masaa has left its piano sound behind, yet continues with its new guitarist to pursue a path that bridges jazz improvisation and Arabic ... END_OF_DOCUMENT_TOKEN_TO_BE_REPLACED

Muhyiddin Ibn Arabi (1165-1240) is one of the most influential Arab philosophers and mystics. James Morris, Professor of Islamic Theology at Boston College, explains why his ... END_OF_DOCUMENT_TOKEN_TO_BE_REPLACED

Internationally Bamiyan tends to be associated with the tragedy surrounding its empty Buddha niches. But in recent years the central Afghan province has also been an island of ... END_OF_DOCUMENT_TOKEN_TO_BE_REPLACED

Any journey to southern Spain, to Al-Andalus, is akin to the start of a dream that finds its beguiling continuation beyond the Pillars of Hercules, in the Andalusian cities of ... END_OF_DOCUMENT_TOKEN_TO_BE_REPLACED
Author:
Andreas Kilb
Date:
Mail:
Send via mail

END_OF_DOCUMENT_TOKEN_TO_BE_REPLACED
Social media
and networks
Subscribe to our
newsletter