Spoils of war: Taliban put victory over U.S. on display 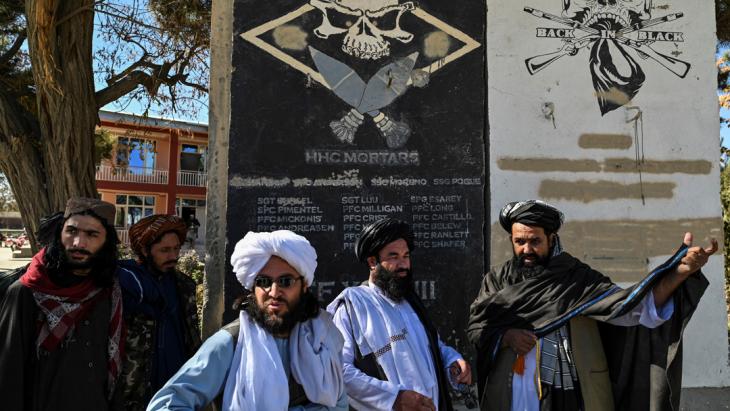 In the governor's compound of Afghanistan's Ghazni province, a new exhibit is unveiled before a rapt audience of Taliban fighters – sections of blast walls from a former U.S. military base.

One concrete slab is inscribed with the names and regiments of U.S. troops who served in the province during America's longest war.

Like soldiers throughout history, U.S. troops regularly daubed their names on the walls of bases and fixed positions they occupied. But now the towering block is on public display – being used to bolster the Taliban's narrative of toppling U.S.-led forces after 20 years of fighting.

"We have to show this so that Afghans, the world, and future generations know that we beat the Americans," Taliban provincial culture chief Mullah Habibullah Mujahid told journalists. "Even if they called themselves the greatest power in the world."

Taliban forces took the city of Ghazni – 150 kilometres south of Kabul – three days before the capital fell on 15 August.

The region has 3,500 years of rich recorded history, and the Taliban are now busy writing the latest chapter with proof of their military triumph.

The propaganda push comes as Afghanistan's new rulers struggle to evolve from an insurgency to a governing power in a country on the brink of economic collapse, with the UN estimating more than half the population is facing acute hunger.

On roads outside the city of nearly 200,000, another informal exhibition to the Taliban victory has been erected. Rusting hulks of destroyed American armoured vehicles are on display, their weapons removed, their tyres flat and frayed.

Children clamber around and over the wreckage, which also features skeletons of abandoned Soviet tanks from the decade-long occupation of Afghanistan.

That invasion ended in humiliation for the Soviets, and – alongside the defeat of British troops in the 19th century – Afghans are quick to remind visitors that the country has now triumphed over three foreign empires.

"We are proud of our achievement when we see this," said 18-year-old Taliban fighter Ozair, who like many in the country goes by only one name. "We showed that Afghans born here could beat America, a powerful country," he added, surveying the crumpled humvees and charred personnel carriers.

Reminders and relics of two decades of the U.S.-led occupation of Afghanistan are scattered across the nation – some of them usable. Much military hardware gifted to Afghan police and armed forces fell into the hands of the Taliban in the last chaotic days of the US-backed government.

The windfall of weapons, vehicles and uniforms has given the new rulers of Kabul tangible spoils of victory. But curating those trophies into a credible homage to the Taliban's return to power remains a challenge.

Standing at the blast walls, Mullah Habibullah Mujahid boasted that the 20 or so names inscribed included "important commanders and generals" killed in combat. The ranks listed, however, were all junior – and none of the names feature on databases of Americans killed in the war.    (AFP)

END_OF_DOCUMENT_TOKEN_TO_BE_REPLACED
Social media
and networks
Subscribe to our
newsletter