Spotlight on bridge builders: Comedian Idil Baydar
Counting up the cliches, Jilet Ayse tells it like it is

Comedian Idil Baydar may have received numerous awards, but she has also been the recipient of death threats from right-wing extremists. Her comic characters Gerda Grischke and Jilet Ayse hold a mirror up to German society and encourage audiences to take a closer look. Ceyda Nurtsch introduces her for Qantara.de

Mothers know best. This saying might be disputed, but it stubbornly endures, perhaps because there is a grain of truth to it. And, in Idil Baydar's case, it's lucky there is.

It's 2011. Idil Baydar, born in Celle in 1975, is working at the Rutli School, a comprehensive school in the Berlin district of Neukolln, which achieved dubious notoriety nationally as a hotspot for violence and language issues.

Yet Idil Baydar recognises huge potential in the rougher tone of conversation used at the school. "When I was young, we only ever spoke Berlin German. The language at the Rutli School, employing phrases like 'isch schwoere' ('I swear') and similar expressions, was new to me. I found it fascinating how many different cultures came together at the school and how words from different languages blended together." She tells her friends 'how brilliant it is'. Her mother gets wind of it and is absolutely convinced: the language captures the spirit of the time and needs to find its way onto the Internet.

Baydar claims she acquiesced more to placate her mother, than for any other reason. A few clicks and the loss of some of her dignity, she thought, and the whole thing would be over. But the YouTube video was just the beginning. It received thousands of views, as did all her subsequent videos. This heralded the birth of her character, Jilet Ayse, an eighteen-year-old student at a comprehensive school in Kreuzberg, who rants in coarse and uppity terms about her day-to-day life: about the Germans, her super-assimilated cousin Adem, the job centre, the constitution. There's not a single cliche about migrants that she leaves out, taking it so over the top that the viewer – in all honesty – eventually catches themselves thinking along the same lines.

You may also like: Immigration – Integration "made in Germany"

Jilet Ayse has taught her courage and honesty

"The character of Jilet Ayse emerged out of a kind of naivety and it's a good thing it did," Baydar explains, describing the beginning of what she calls the most significant personal journey she’s made and her encounter with what she calls 'the best teacher I’ve ever had'.

Direct and fearless, Ayse – the comprehensive school kid with her tanning studio glow, countless gold chains and mobile phones – has taught her a lot. Jilet Ayse, she says, has taught her, and shown her, courage and honesty, how to appreciate things that other people – including herself – disparage. "With Jilet Ayse, I was able to really deal with these things and begin a kind of healing process," Baydar says.

Baydar has gone on to add Berlin Nazi grandmother Gerda Grischke to her repertoire and has received numerous awards for her comedy. "We always think of ourselves as being so enlightened and scientific, so we love to try to de-emotionalise our emotional processes," she explains. "Jilet Ayse does away with that. She’s found the words to describe things which lots of people have experienced in similar ways." She offers a space in which people with a history of migration can enter into an exchange with one another. "Individual experiences meld together to become a collective experience. For instance, when Jilet Ayse says 'You stick us all in comprehensive schools, no matter what marks we get'."

"Taking charge of our own stories"

Discrimination experienced by people with a history of migration is hardly a unique or rare occurrence in Germany. Baydar hopes to use her art to critique society and raise awareness of this among her audiences all while entertaining them. And she wants to give people, both with and without a history of migration, an opportunity to talk to one another.

After all, the majority of society doesn't talk to migrants – it talks about them. Baydar hopes to strengthen the migrant scene, improve its confidence in itself. At the same time, she hopes to draw the majority of society's attention to the fact that, "You don't get to tell us who we are. We're taking charge of our own stories." But she's also hoping that people without a migration background will be encouraged to change. She would like to encourage them to "take a clear stand against fascist narratives". They should, she says, stop falling back on old mechanisms and using stereotypes like the trope of the criminal foreigner. 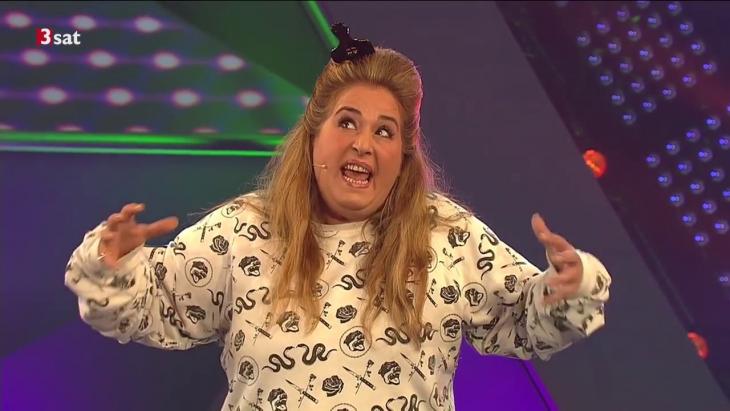 When comedy gets serious: "Germany could pioneer a new kind of global consciousness through the rigorous prohibition of racism and the far-right, developing a concept to push fascist tendencies into a position where they can do no harm. This could work if we collectively manifest the unity that exists within humanity and actually implement the constitution." Despite her swearing and scolding, Jilet Ayse is, in her heart of hearts, 'all about love'"

Baydar herself is as polarising as her characters. The criticisms of the police which she has expressed on various TV talk shows are just one example of this. Only once the police recognise their structural racism and begin to fight it will they be able to regain her trust, she says. "If the police manage to find a new sense of integrity. If they say, we take the constitution as our foundation and will allow ourselves to be investigated by independent organisations without viewing it as external interference, then we'd be on the right track." She'd be happy to work together with the police to help them achieve this, too.

Despite her harsh critiques, Baydar – like her characters – is at bottom both conciliatory and optimistic. Germany, she thinks, has the potential to offer the world something new. "Germany could pioneer a new kind of global consciousness through the rigorous prohibition of racism and the far-right, developing a concept to push fascist tendencies into a position where they can do no harm. This could work if we collectively manifest the unity that exists within humanity and actually implement the constitution." Despite her swearing and scolding, Jilet Ayse is, in her heart of hearts, 'all about love', Baydar says. "Yet the Germans do appreciate her new brand of honesty," she says.

Research project "The Global Qur'an", brainchild of Professor of Islamic Studies Johanna Pink and sponsored by the European Research Council, analyses the history and ... END_OF_DOCUMENT_TOKEN_TO_BE_REPLACED

As the Western world emerges from a holiday season made less festive by COVID-19, millions of children in Afghanistan are starting 2022 facing the prospect of famine, illness, and ... END_OF_DOCUMENT_TOKEN_TO_BE_REPLACED

A wedding extravaganza of bright colours, flowers, feasting and dancing, yet the bride, Nefie Eminkova, who comes from Bulgaria's Pomak – Muslim – minority, can see none of it. ... END_OF_DOCUMENT_TOKEN_TO_BE_REPLACED

Every year in December, the team at Qantara.de takes a look back at the articles that proved most popular with our readers. This year is no different. Here is a run-down of the ... END_OF_DOCUMENT_TOKEN_TO_BE_REPLACED

Jesus – Issa in Arabic – doesn’t merely enjoy the highest place among the prophets in the Koran. He is also revered in Islam’s mystical tradition for his message of love and mercy ... END_OF_DOCUMENT_TOKEN_TO_BE_REPLACED

The military in Sudan has never waged war against a neighbour, but it has already staged 17 coups. Tens of thousands of people are risking their lives to oust the military by ... END_OF_DOCUMENT_TOKEN_TO_BE_REPLACED
Author:
Ceyda Nurtsch
Date:
Mail:
Send via mail

END_OF_DOCUMENT_TOKEN_TO_BE_REPLACED
Social media
and networks
Subscribe to our
newsletter