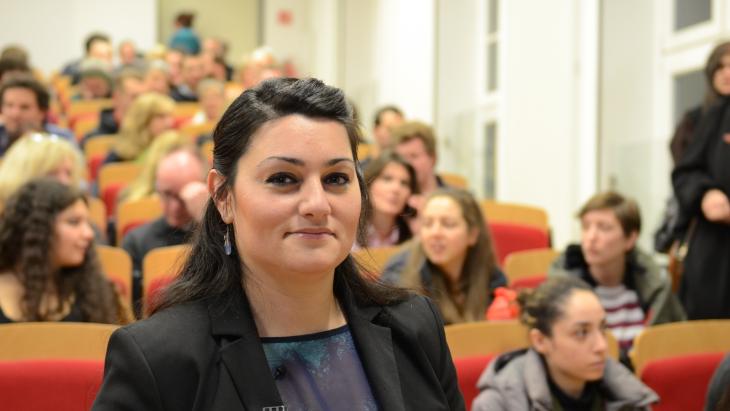 Lamya Kaddor is a frontwoman for liberal Islam in Germany. The Islamic studies teacher has received numerous awards for her dedication. But she also faces hostility from many sides. Ceyda Nurtsch introduces her for Qantara.de

For some people, it seems, there are more than 24 hours in a day. Lamya Kaddor is one of them. She has a family herself, and teaches Islamic education in schools. She has published several books, travels all over Germany giving lectures, while also writing regular articles and columns. For many years, she was the head of the Liberal-Islamic Association, of which she is a co-founder, and the Society of Teachers of Islamic Studies in the German Language. And now she has decided to enter politics.

The path she has taken, she tells me, has not been particularly planned. It is more a case of one thing following another, and reacting to circumstances as they arise. For her, as for many Muslims, the 9/11 attacks were a turning point. "Up until then, I’d taken Islamic studies purely out of interest, with a focus on theology. But at a stroke, everything suddenly became political."

She works in the department of Islamic Religious Pedagogy at the University of Munster, the first German university to train teachers of Islamic education.

In 2008, she became a pioneer. Der Koran fuer Kinder und Erwachsene, (The Koran for Children and Adults, published by C.H. Beck), which she co-edited, contains a selection of child-friendly Koran verses in contemporary translations, with commentary and divided up into topic areas. It was the first German-language book of Koran verses and explanations for children on the market. "I thought to myself, surely it can’t be true that there are thousands of children’s Bibles, but not a single children’s Koran. I wondered what the Muslims who’ve been living in Germany the whole time have been doing all these years."

Kaddor is a daughter of migrants herself. She was born in 1978 to Syrian immigrants in Ahlen, Westphalia, where she never had a connection to a mosque community. She doesn’t know life as part of that kind of community, she says. Islam was always a private thing in her family. "My parents are cool, open people, but they’re very religious, too," she tells me. "My mother was the family Mufti. She had everything under control. It was important to her to convey the religion properly."

Now Kaddor herself is the one conveying knowledge about their religious roots to Muslim children and young people. It is important to her to strengthen young Muslims’ sense of identity, and to encourage them to become self-confident members of German society. When she began teaching Islamic education in schools, she was entering virgin territory. She faced confusion and ignorance from all sides, she recalls. Islam in German, is that even possible? Why isn’t she Turkish? Is she allowed to do that without wearing a headscarf?

Between Islamophobes and conservative Muslims

In Germany’s Islamic landscape, Lamya Kaddor is a prominent voice between secular and traditionalist Muslims. She represents a contemporary Islam and can regularly be found in dialogue with Christians, Jews and atheists. She positions herself clearly in favour of a pluralist society and respectful, peaceful coexistence. That is also what the Liberal-Islamic Association that she helped to found in 2010 stands for.

Her projects and books address fundamental problems and challenges: racism, Islamophobia, the prevention of Islamic extremism, anti-Semitism, online hate speech. And this means that she is regularly caught in the crossfire between right-wing Islamophobes and traditionalist Muslims. For both groups, the line between exemplary Muslim woman and someone fouling her own nest is often a fine one.

Following the publication of her book Die Zerreissprobe. Wie die Angst vor dem Fremden unsere Demokratie bedroht (The Stress Test: How the fear of foreigners is threatening our democracy, Rowohlt 2016), she received death threats and was forced to put her teaching on hold for a while. A project on a2nti-Semitism among Muslims2 had to be carried out under police protection.

Does the increase in right-leaning hate speech and right-wing violence frighten her? "Unfortunately, that was to be expected," she says. She wasn’t surprised by the NSU murders and the attacks in Hanau and Halle. "In the past, not enough attention was paid to the threat from the right. People were always focused on the Islamists. And rightly so, but that wasn’t enough. And this is what happens. It pains me to say it, but politics understood the threat from the right too late. Even now, I’m not completely sure the establishment has realised that it’s actually five minutes past midnight already."

Kaddor’s vigour, energy and humour seem unshakeable. Yet she does admit to getting frustrated sometimes. Such as when the discussion of whether Islam really belongs in Germany is rehashed again and again. Then she needs to distance herself mentally from the subject for a while. "Until the tingling in my fingers comes back, the feeling that I actually do have to do something again. I have children of my own, I don’t want them – or my students – to still be facing the question whether they’re Germans or Muslims 20 years from now. If they’re in favour of Sharia or the German constitution."

And what kind of society does she want to see? "One that sees diversity and plurality of opinion as a strength and a part of German identity. I would like to see a country in which everyone belongs – assuming they recognise the constitution, uphold its values and identify with German society – independent of their cultural or religious affiliations, or their sexual orientation." This is what she is fighting for. And in future, the fight will also be a political one. She has joined the Green Party and intends to run as a candidate in the 2021 parliamentary elections. Another new challenge for Lamya Kaddor.

Some companies in Germany are reluctant to hire Muslims. But it is not only the Muslim applicants who are losing out, so too are the companies. After all, there are multiple ... END_OF_DOCUMENT_TOKEN_TO_BE_REPLACED

The European Court of Justice has given its backing to companies that don't allow female Muslim staff members to wear headscarves – as long as they don't permit the wearing of ... END_OF_DOCUMENT_TOKEN_TO_BE_REPLACED

Ayaan Hirsi Ali’s new book "Prey" claims to examine how Muslim immigration threatens the rights of Western women. Indeed the injustices women face only seem to matter to her when ... END_OF_DOCUMENT_TOKEN_TO_BE_REPLACED

The Saudi national team is set to play the German Olympic squad at the Olympics in Tokyo later this month – a chance for the outsiders to make their mark. At the same time, and ... END_OF_DOCUMENT_TOKEN_TO_BE_REPLACED

I regret very much that I worked for the Bundeswehr. If the Taliban knock on my door, I hope they shoot me right away. Guest article by Ahmad Jawid Sultani END_OF_DOCUMENT_TOKEN_TO_BE_REPLACED

END_OF_DOCUMENT_TOKEN_TO_BE_REPLACED
Social media
and networks
Subscribe to our
newsletter