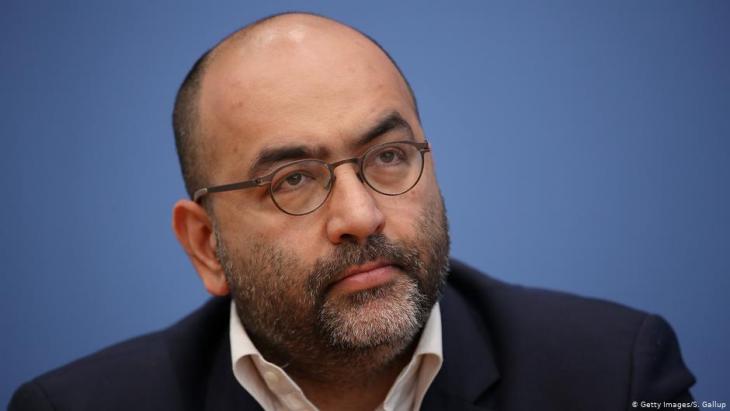 Spotlight on bridge-builders: Omid Nouripour
Taking a stand against the "overemphasis of difference"

Omid Nouripour fled Iran for Germany with his family at the age of 13. Today, he is foreign policy spokesman for Germany’s Green Party. He argues that societal differences should be seen as potential and vehicles for peace in foreign policymaking. Profile by Ceyda Nurtsch for Qantara.de

Whenever Omid Nouripour from the Green Party addresses the Bundestag, things tend to get heated. For example when Hesse’s state premier at the time Roland Koch (CDU) presented his case against dual citizenship, Nouripour fulminated at the idea of questioning the loyalty of anyone with more than one passport: "I simply fail to understand how you can think of developing some sort of loyalty paranoia here," he said. Human beings are actually very complex; nationality is just one individual aspect of a person and reduces them to this, he went on.

Nouripour continues indignantly that with this stance, the CDU is doing a disservice to a great many people in this country. This fight against the "overemphasis of difference", as he calls it, is his driving force. After all, in his view, a diverse society stems from a whole range of different experiences.

Many political careers are launched by a clear trigger, a defining experience. Omid Nouripour’s story is no different. Born in 1975 in Tehran, he fled with his family to Frankfurt at the age of 13.  "In my case, it was the arrival in Germany and my efforts to win recognition," he says, explaining his motivation to enter politics. "I regularly had the feeling that whatever I did, whatever effort I put into integration, ultimately it all came down to the differences.”

"This country has huge potential"

Many people in Germany experience discrimination on a daily basis, Nouripour is very much aware of that. His goal is to change this. But there is another reality in Germany, he says: his own biography also shows the country’s potential. Not everywhere presents such opportunities for advancement.

His defining moment came in 1993. He saw Green Party politician Cem Ozdemir on television for the first time. Although up to that point he hadn’t considered politics as a career, it was suddenly crystal clear: you don’t have to have blonde hair and blue eyes to get involved in shaping society.

And why did he end up with the Greens? The answer is simple: "The Green Party manager in Frankfurt didn’t ask where I was from, because for this party that’s just not important." He joined the Greens in 1993 – a full six years before he became a German citizen. A member of parliament since 2006, he has served as the parliamentary group’s foreign policy spokesman since 2013.

The atmosphere in the debating chamber has changed significantly since the AfD entered the Bundestag in 2017. "To see these people, who can lawfully be described as Nazis, running around the Bundestag with its history, is unbearable," says Nouripour. Whenever someone then describes him as "someone who understands Islamists", Nouripour, whose uncle was executed in Iran, tries not to take it personally. "But when I shake the hand of AfD representatives, because I treat them as normal people, I sense that it’s more of a punishment for them than for me," he adds.

Tensions have risen in parliament in recent years, he says. But Nouripour is also seeing positive developments. "We’re experiencing many more great moments of parliamentary solidarity, because the democratic parties are standing shoulder-to-shoulder and are able to fight back," he continues.  It is just a pity they didn’t show their immense potential with such clarity beforehand, he says. Then perhaps the AfD would not have cleared the percentage hurdle into parliament in the first place.

Yet Nouripour remains optimistic. "When all’s said and done, we’re strong," he says. Eighty seven percent of Germans didn’t vote for the AfD, after all. Images such as those from summer 2020, when radical right-wing demonstrators waved the flag of the German Empire and shouted oaths in front of the Bundestag, are a disgrace and must be prevented at all costs in future, says Nouripour. But they don’t signal the demise of western democracy, not by a long shot. "We need to look to our strengths and not freeze like rabbits caught in the headlights in anticipation of what the right-wing extremists might do next," says Nouripour.

But of course, one can’t just ignore everything the right-wingers are saying, he continues. If the crimes of the Nazi era are being downplayed or people treated with disrespect, this needs to be dismantled with arguments. And this is precisely what’s happening.

"We can’t allow ourselves to become completely engrossed with the right wing. As the opposition, our prime responsibility is to provide the checks and balances for federal government. For example, we believe the coalition's climate protection measures to be woefully inadequate. The issue of climate protection cannot be allowed to fall off the radar simply because we’re too busy dealing with the right wing."

"The self-healing powers of democracy are working"

Nouripour is convinced that the self-healing powers of democracy are working. The appeal of populist forces has declined due to the problematic approach of politicians such as Trump and Bolsonaro to the coronavirus pandemic, he says. But social media remain a problem. "Voices for good are just too quiet on the social networks. The majority is not loud enough. People need to turn up the volume," he says.

Nouripour has personal experience of war and strife, hence his fervent desire to help secure peace as a politician using diplomatic means. Yet situations can arise when military intervention becomes unavoidable, something he became convinced of following lengthy debates within his party. He believes military force is necessary to repel greater evils. In his view, one example of such a case is the German army’s anti-IS campaign in northern Iraq.  "Sometimes you can’t stop a war without weapons," he says.

Nouripour represents his convictions clearly and with boundless energy. What drives him? That’s quite simple: "We only have one planet and I have children."

It is what spurs him on to continue the fight, even though he regularly receives threats and hate mail. To wake up in the morning and read such things is not pleasant, he says.  But the main motivation for the senders of these hate mails is that he stops doing what he’s doing. "The best reaction is just to continue doing what I do."

Home
Print
Newsletter
More on this topic
The death of George Floyd and endemic discrimination: It's time to replace "race" in the German constitutionAfter the Islamist attacks in France and Austria: "Placing Muslims under general suspicion is not the solution"Germany′s Islam debate: For all our freedoms!Discrimination in schools: Better marks without a headscarf
Related Topics
Democracy and civil society, Dialogue of Cultures | Intercultural Dialogue, Human rights, Integration in Germany, Islam in Europe, Migration in Germany, Multiculturalism, Policy on refugees and migration, Refugees, Right-wing populism, Spotlight on bridge-builders, Xenophobia
All Topics

Recent efforts to rehabilitate Assad are setting a damaging precedent for accountability, just as the international community is expressing the need to hold Russia to account for ... END_OF_DOCUMENT_TOKEN_TO_BE_REPLACED

Nouara may be 65, but she is ready to join thousands of others who burn their ID and pay traffickers for the chance of a new life in Europe. Zineb Bettayeb reports END_OF_DOCUMENT_TOKEN_TO_BE_REPLACED

Education for girls and women is still possible in Afghanistan, says Reinhard Eroes of the Kinderhilfe Afghanistan initiative. In interview with Elisa Rheinheimer, he talks about ... END_OF_DOCUMENT_TOKEN_TO_BE_REPLACED

Locals in the Middle East have said European critics are showing bias and hypocrisy when they condemn Qatar. Observers agree that Qatar has had to deal with more criticism than ... END_OF_DOCUMENT_TOKEN_TO_BE_REPLACED

In Doha, Arabs from Morocco, Tunisia, Egypt and Algeria are gathering to celebrate the first ever FIFA World Cup to be held on Arab soil. The criticism from Europe? Over the top, ... END_OF_DOCUMENT_TOKEN_TO_BE_REPLACED
Author:
Ceyda Nurtsch
Date:
Mail:
Send via mail

END_OF_DOCUMENT_TOKEN_TO_BE_REPLACED
Social media
and networks
Subscribe to our
newsletter