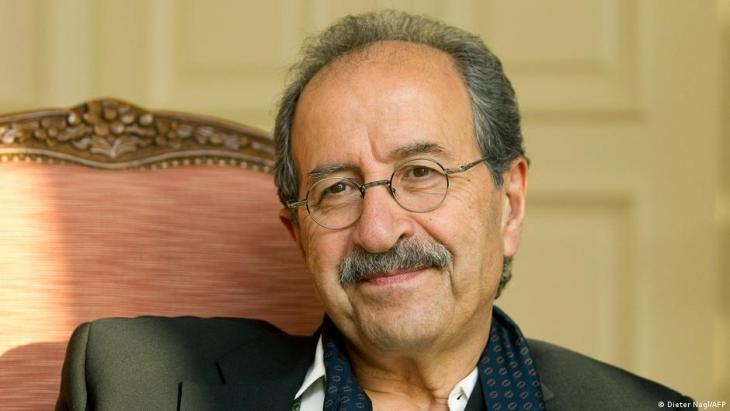 Spotlight on bridge-builders: Rafik Schami
The story-teller from Damascus

Syrian-born Rafik Schami is a gifted storyteller and one of the most successful authors writing in German today. In his 50 years in exile in Germany, he has introduced the Arab art of storytelling to German literature and has been showered with prizes. But Schami is more than just a storyteller, he is also an outspoken critic of politicians and governments both in Europe and the Middle East. By Ceyda Nurtsch

"Patience and humour," so an Arab saying goes, "are two camels that will take you across any desert." It appears at the start of Rafik Schami's novel Sophia: Or the Beginning of All Tales. The saying also hangs on the wall of his office. The words mean a lot to him.

Rafik Schami has been living and writing in German exile for half a century. His Syrian homeland is a place he can now only visit in his stories. He has written more than 70 books, which have been awarded countless prizes and translated into many languages. Today, his readings fill large halls.

Suheil Fadel (his given name) was born in 1946 to a Syriac-Christian family in Damascus. He studied chemistry, mathematics and physics in the Syrian capital, and started the critical literary wall news sheet Al-Muntalak (The Starting Point) in 1966. It was banned in 1970. That same year, he fled the country with a suitcase full of manuscripts, escaping from military service and a life under censorship. He made his way first to Lebanon and then to the German city of Heidelberg, where he learned German and continued his studies, receiving a doctorate in chemistry in 1979.

But his heart still belonged to the stories of his homeland and the streets and smells of his childhood in the Christian Bab Touma quarter of Damascus. In his stories, he returned to these places that he could no longer visit. From then on, he called himself Rafik Schami, "Friend from Damascus".

In the tradition of Arab authors in exile 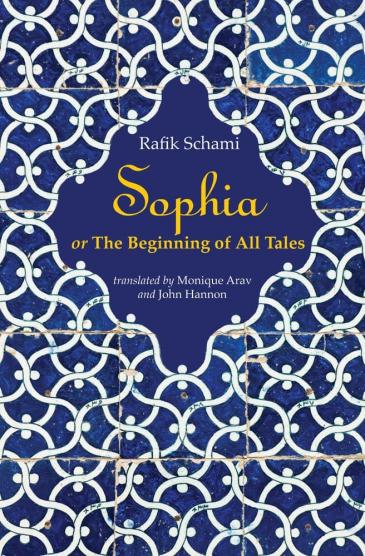 Born and raised in Damascus, Rafik Schami fled to Germany in 1970, where he learned the language and painstakingly taught himself literary German. He now writes all his books, including the best-selling "Sophia or The Beginning of All Tales", in German. Says Schami: "For me, telling stories in German is biographically linked with the freedom to write and to narrate as the story or the novel requires, and not the way the tribe's sheikh or the dictatorship's censors decree."

At that point, he had no idea that he would one day bring the Arab art of storytelling into German literature and publish several bestsellers in German. He was focused more on the Arabic exile literature that had fascinated him since his schooldays in Damascus, such as that produced in the United States. His writing was inspired by Arab writers driven out by the colonial powers, of whom the philosopher and poet Khalil Gibran (1883–1931), who was born in Lebanon and later emigrated to the USA, was the most famous.

Rafik Schami imagined a similar fate for himself and saw himself as an Arab author in exile. "But times under the Arab dictators are worse than they ever were under the Ottoman sultans," Schami says. "Today, if you don't want to be a follower of a regime, you are banned everywhere." No publisher in the Arabic-speaking world wants to publish his novel Damascus Nights uncensored.

And so Schami painstakingly taught himself literary German. "For two years, I copied out the best German novels from Goethe to Thomas Mann by hand, until I had internalised literary German," he recalls.

"After that, I began carefully transferring the stories, fairy tales and novels I had written in Arabic into German." With great success. The novel Damascus Nights, first published in 1989 by DTV as Erzähler der Nacht, became his breakthrough and a global hit. From then on, he wrote all his novels in German. "For me," he says, "telling stories in German is biographically linked with the freedom to write and to narrate as the story or the novel requires, and not the way the tribe's sheikh or the dictatorship's censors decree."

His readings have little in common with the classic format of a literary event. They don't involve an author sitting at a table under a reading lamp in a darkened room. Instead, for the last 40 years, the inspired storyteller with the round glasses and the embroidered waistcoats has been taking his listeners on fascinating narrative journeys that for many become an unforgettable experience. He calls his lectures "ear films". He leads the members of his audience through the alleyways of Damascus, letting them see, hear, taste and smell what his protagonists are experiencing. One story leads to the next; doors to scenes and digressions open unexpectedly in an endless sequence of new episodes. German-speaking audiences simply love Schami's oral storytelling.

But since the start of the Syrian civil war, Schami has increasingly become the face of Syria, and an ambassador for his lost homeland. Not only writing his stories from Damascus in German, but telling them freely in German to an audience is not a balancing act but a kind of enrichment, he says; both for him and for the German language. "I've learned that sentences that sound 'normal' in Arabic seem kitschy when you translate them literally. Through me, German literature has gained stories that never existed before."

For democracy and freedom

Rafik Schami is no author in an ivory tower. He has spoken out in favour of democracy and freedom again and again. He is unafraid to condemn the dictators of this world, and advocates, for example, for the reconciliation of Israelis and Palestinians. He doesn't mince his words when it comes to criticising the Assad clan in Syria either, holding President Assad responsible for atrocities such as the poison-gas and barrel bomb attacks on the civilian population.

He is also outspokenly critical of the double standards of German and European foreign policy. "This policy lacks credibility. The politicians speak with two tongues, one version intended for the population here and the other for doing arms deals with the villains of the Arab world."

He also voices his opinions on topical issues in Germany – right-wing populism, for instance. The growing strength of the right in Germany does anger him, he says, but he has great faith that German democracy will triumph over its enemies. "Since the refugee crisis of 2015 at the latest, populists and salon-provocateurs have been paving the way for the adherents of the Querdenker movement, anti-Semites and other right-wing radicals," says Schami. What does surprise him, however, "is how leniently the German courts deal with these right-wing radicals." 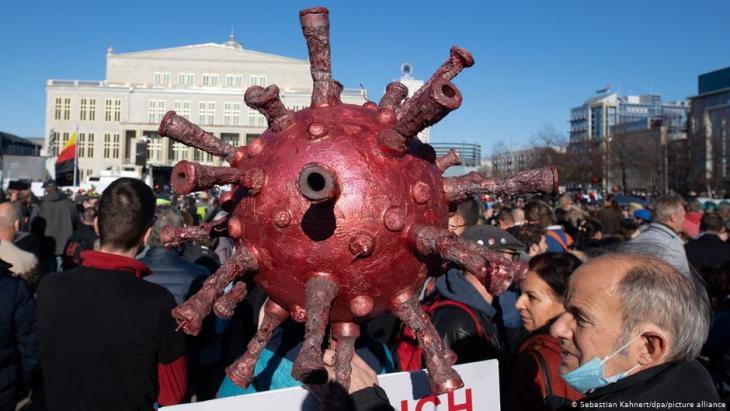 Schami is not afraid to speak out on current affairs in Germany. Says Schami, "Since the refugee crisis of 2015 at the latest, populists and salon-provocateurs have been paving the way for the adherents of the 'Querdenker' movement, anti-Semites and other right-wing radicals." Up until 2020, "Querdenker" was the word used for people who think outside the box. Adherents of the self-named "Querdenker" movement believe that the coronavirus is a hoax and have taken to the streets to protest against lockdowns and COVID-related restrictions

Speaking out in this way comes naturally to him. As he sees it, the freedom that he enjoys obliges him to get involved. He also feels that good literature can make a contribution to creating a better world and to raising awareness among people, but concedes that this is a long, slow process. "Above all, I want to tell good stories and entertain my readers. If I succeed in giving them a believable depiction of life in Damascus, then I'm very happy."

Hope is his hobby

Today, it is questionable whether Rafik Schami will ever set foot in his Syrian homeland again. But he has no intention of giving up hope. After all, as he once said, hope is his hobby. "Anyone who tells stories hopes," he explains. "In spite of all the setbacks, my hope will not die. Historical experience gives me reason to hope because no despot can rule forever."

He would like to see a society where all people can live on equal terms, irrespective of their faith, ethnicity or gender. He dreams of a "society that remains watchful for injustice and treats its environment with respect, as an important part of its life, body and soul, and not as something foreign and soulless." A society in which all people deal with each other patiently and peacefully.

Iranian author Fariba Vafi is adept at describing everyday scenes and concealing within them something ambiguous, in parts strange and grotesque. She writes novels – which have ... END_OF_DOCUMENT_TOKEN_TO_BE_REPLACED

Her grandparents are Jews – born in Tunisia and Algeria. Director Cleo Cohen has now broken the silence about this with a very personal debut. By Nadine Wojcik END_OF_DOCUMENT_TOKEN_TO_BE_REPLACED

Life imprisonment for crimes against humanity: that was the sentence handed down to Anwar Raslan in the world's first trial of a member of the Syrian torture system. Matthias von ... END_OF_DOCUMENT_TOKEN_TO_BE_REPLACED

Every year in December, the team at Qantara.de takes a look back at the articles that proved most popular with our readers. This year is no different. Here is a run-down of the ... END_OF_DOCUMENT_TOKEN_TO_BE_REPLACED

With his new album, "A Voice Keeps Calling Me", the Persian santur player Kioomars Musayyebi is building bridges from Iran across the Arab world to European early music. By Stefan ... END_OF_DOCUMENT_TOKEN_TO_BE_REPLACED

Former lawyer Said Haider has invented a chatbot for those seeking advice on anti-discrimination issues – Meta is the first chatbot of its kind in the world. In conversation with ... END_OF_DOCUMENT_TOKEN_TO_BE_REPLACED
Author:
Ceyda Nurtsch
Date:
Mail:
Send via mail

END_OF_DOCUMENT_TOKEN_TO_BE_REPLACED
Social media
and networks
Subscribe to our
newsletter