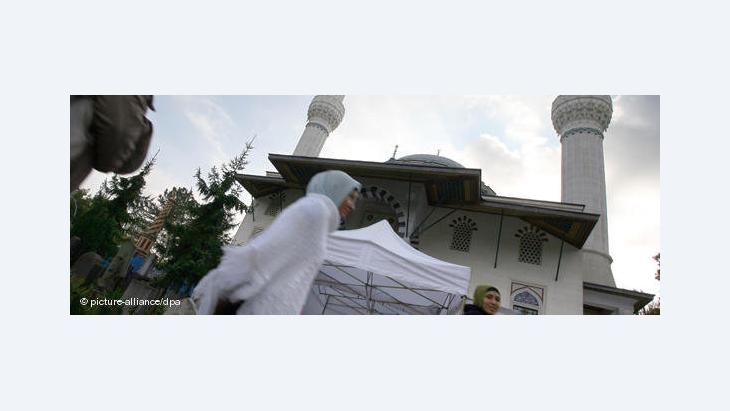 Standing up to Discrimination against Muslims
Know Your Rights!

Since 2010, a Berlin-based network has dedicated itself to opposing discrimination against Muslims by providing information and legal advice to the Muslim community. As Sabine Ripperger has been finding out, Muslims are often unaware that discrimination is illegal in Germany

Germany is not immune to the blight of discrimination in its various guises. People often find themselves at a disadvantage when it comes to looking for work or accommodation simply because of the colour of their skin or their ethnic origin.

Despite the introduction of an Equal Treatment Act in 2006, which was intended to put a stop to this kind of discrimination, the problem persists. Many of Berlin's Muslims are still largely unaware of their rights and require assistance when it comes to exercising them.

Making Muslims aware of their rights

The Netzwerk gegen Diskriminierung von Muslimen (﻿Network against discrimination against Muslims) is a cooperative effort between the Muslim association Inssan, which means "human being", and the Turkish Union in Berlin-Brandenburg. It has been actively engaged in providing greater information and assistance in this area since August 2010 and receives financial support from the Berlin Commissioner for Integration and Migration, with additional funding coming from the Open Society Foundation in London. 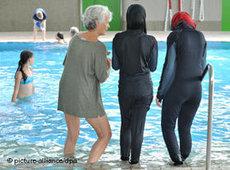 In May 2009, the Higher Administrative Court of Münster decided that it was reasonable to require Muslim girls to attend swimming lessons and says that it acceptable for them to wear bathing suits that are appropriate to the Islamic dress code

​​In the first year of the project alone, almost 1,000 people took part in anti-discrimination events in mosques and other Muslim institutions – no mean feat given that many of those who attended were initially sceptical about the effectiveness of taking action.

But it was a perception that soon changed, says Lydia Nofal, coordinator of the network and director of Inssan. "People really became interested and aware of the fact that they do actually have rights. Perceptions have really been changed."

The network has documented a total of over 220 cases of discrimination since it started work.

Nofal cites education as a particularly problematic area with regard to discrimination against Muslims. "School pupils tell us about Islamophobic remarks they hear being made by teachers, especially to girls who wear headscarves."

Very often it is because of problems that have arisen with sport or swimming lessons. Nofal relates one case where a girl was not allowed to take part in sports because she wore a headscarf. "And when she did not turn up for classes, she found to her dismay that she had failed the course."

When it comes to the experiences of Muslim women on the job market, Nofal sees very similar kinds of problems. It's not unusual for a girl with a headscarf to be told that she has the best qualifications, that ﻿she can have a job,  but that she can only take up the offer if she gets rid of her headscarf. The girls are then asked to remove their headscarves, "and this is done without any sense that it is wrong – in spite of the fact that it is a clear violation of the Equal Treatment Act," explains Nofal.

This kind of reaction and prejudice often makes it very difficult for girls to find jobs or training opportunities, she says. Such girls often end up seeking opportunities within their own community because they feel that they will not be accepted elsewhere.

Islamophobia in the public sphere 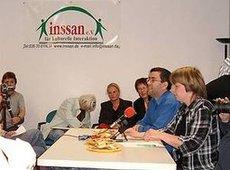 ​​Islamophobia is something that can be experienced anywhere, even in public spaces such as the underground, where Muslim women and girls often find themselves subjected to insults such as "Islamist slut" or are even spat on. One of her own employees, says Nofal, was beaten up on the underground by right-wing extremists, though she does concede that this particular incident took place some time ago.

According to Nofal, "it is those women who tend to wear longer headscarves or who dress most conservatively, who are most likely to be accosted, or even jostled, on the street." Nofal also personally knows women who are now afraid to go out alone after having had such an experience.

It is this sort of thing that makes "increasing people's self confidence, making them aware of the fact that they too are citizens of this country and as such have the same rights as everyone else, such an important aim of the project. And, of course, no one should be afraid to make use of those rights."

The fact that the project has thus far succeeded in training 20 anti-discrimination volunteers is a source of pride. The volunteers go out into the Berlin mosques and establish important contacts with the community there. As members of those communities themselves, they can provide initial and valuable assistance to those experiencing problems.

Given the current debate on right-wing activities in Germany, Nofal believes it is particularly important that "there should be acknowledgment of the fact that this is not just a problem caused by a lunatic right-wing fringe. Racism is deeply rooted in this society, and we have to do something to combat it."

In her role as project coordinator of this network, Nofal also warns of the danger of underestimating the effects of inciting racial hatred via the Internet: "Such Islamophobic websites are contemptuous of humanity," she says, adding that this fact is, ﻿unfortunately, still too often ignored and that such ignorance is dangerous.

Home
Print
Newsletter
More on this topic
Islamophobia and Anti-Semitism: Mechanisms of Exclusion and DiscriminationGerman Intellectuals and Islam: Capitulation or Scaremongering?
Related Topics
Human rights, Integration in Germany, Islam in Germany, Migration in Germany, Muslims in the West
All Topics

Tourists have been returning to Tunisia, Egypt and Morocco. But, given the global uncertainty caused by the Ukraine war, will the comeback be enough to save a struggling sector, ... END_OF_DOCUMENT_TOKEN_TO_BE_REPLACED

The highly controversial Indian blockbuster "The Kashmir Files“, on the exodus of Kashmiri Hindus in the 1990s, is characterised by unilateral representations, negative ... END_OF_DOCUMENT_TOKEN_TO_BE_REPLACED

"Flugt" is the world's first museum dedicated to the stories of those forced to flee. The new museum, which focuses on the fates of refugees then and now, is housed in a former ... END_OF_DOCUMENT_TOKEN_TO_BE_REPLACED

"Finding Home", the second album by Syrian-born, UK-based musician Maya Youssef, works through feelings of loss and destruction until its music reaches a place beyond war and ... END_OF_DOCUMENT_TOKEN_TO_BE_REPLACED

END_OF_DOCUMENT_TOKEN_TO_BE_REPLACED
Social media
and networks
Subscribe to our
newsletter