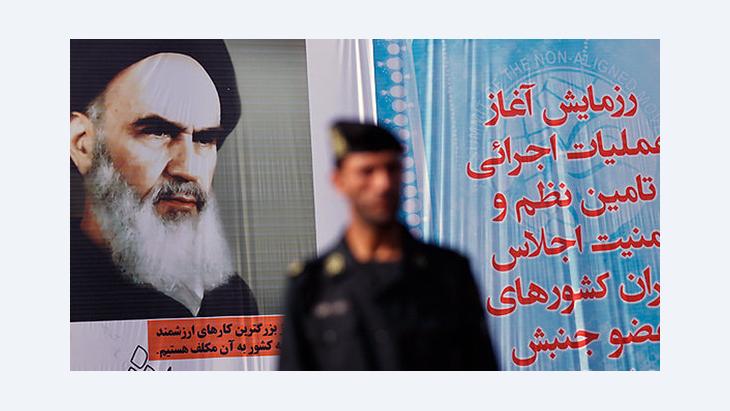 ﻿People in Iran – and women in particular – have long known that not much is private in the Islamic Republic of Iran: the state is all too fond of monitoring and trying to control what its citizens do in private. But when a cult TV figure starts telling the nation that there should be no distinction between the public and the private in the Islamic Republic, it does not bode well for the future. By Ali Sadrzadeh

Mohssen Gharaati is an Iranian television dinosaur. His programme is as old as the Islamic Republic itself. For 33 years now, Gharaati has been appearing on peak-time television every Thursday evening. He prides himself on the fact that in all these years, his show has never once been cancelled. The 67-year-old cleric enjoys cult status with both friend and foe alike – a fact not solely due to his enduring screen presence; his nationwide fame is also down to his open, irreverent style.

Interpreting the Koran is not only the name of his programme, it is also the subject of several books written by the presenter himself. The programme was the brainchild of the founder of the Republic himself, Ayatollah Ruhollah Khomeini, which is an indication of the extent of Gharaati's authority.

In front of a young studio audience, he attempts the impossible: exegesis of the holy text for everyone, including those not able to read and write. Hair-splitting and sophistry are not his style. On the contrary: he works with aphorisms and anecdotes of life experience. He keeps his feet firmly on the ground and concerns himself exclusively with everyday matters; he addresses taboo subjects in a humorous manner without reserve, serves as an agony uncle on family matters and gives young people advice on sexual matters.

When he supplies his Thursday-evening religious explanation of a topical issue coupled with pearls of worldly wisdom, people get an inkling of how serious the matter is and know that the issue will be of top priority in the coming days across the nation. 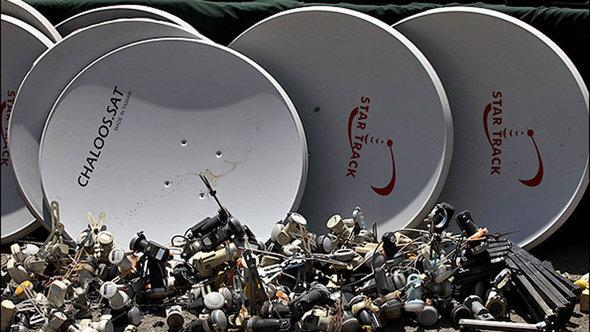 Battening down the hatches: police in Iran regularly confiscate privately used satellite dishes in order to prevent owners from watching foreign television, which is deemed "counter-revolutionary" by the country's leaders in Tehran

No distinction between the public and the private

Two weeks ago, for example, he tackled the concept of "privacy" and impishly explained why one should make no distinction between the public and the private in the Islamic Republic, and why the government also has the right to control the private and the personal. Which television programmes people view via satellite, what kind of pornography they search for at home online … an Islamic state cannot be indifferent to such matters. He ended his programme with the words: "There's no such thing as your own four walls."

Many Iranians – and above all women – have long known why the private sphere cannot be private. But the fact that this Koran scholar has addressed the issue does not augur well. Many residents of the nation's larger cities were given a foretaste of what was to come a few days before the programme was aired. The head of Tehran's police force had again announced that his officers were authorised to enter houses and seize satellite dishes, a threat they immediately carried out in several municipal districts.

But the confiscation of satellite dishes was not the only thing that prompted Gharaati's programme, after all, this is nothing new. In fact it has been part and parcel of everyday life for 17 years since parliament issued a ban on satellite programmes. In short, it was a question of bracing for more bad news.

Four days after Interpreting the Koran, the new minister for communication, General Hassan Nami, gave a press conference and announced that all virtual private networks (VPN) would be blocked with immediate effect, and that use would be restricted to officially registered VPN ports. With this announcement, the general, who was educated in North Korea, closed any remaining holes in the government's Internet filter.

Whipping up fear of a cultural invasion

The comprehensive control of the private sphere is one of revolutionary leader Ali Khamenei's favourite subjects. In almost every address, and in various different ways, he perpetually warns against the dangers of the "cultural invasion". In his last speech to scholars in the city of Mashhad, he got down to brass tacks: it is incumbent upon the government, he said, to devise an Islamic lifestyle, to present a model that encompasses everything: marriage, consumption, living, raising children, leisure, clothing, work and individual conduct, both public and private. He added that the government must regularly report on what steps it has taken to achieve this. 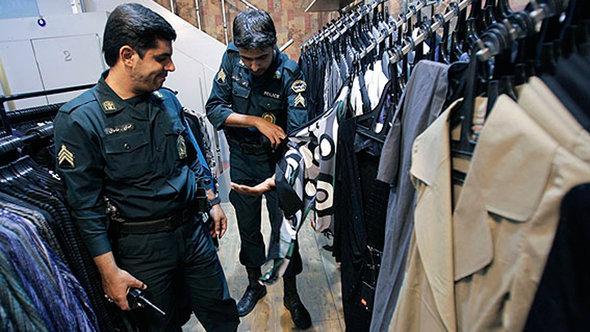 Sartorial surveillance officers: policemen in Iran examine items of clothing in a boutique in Tehran, just one example of the increased attention being paid to "unislamic" dress in recent times

Since he made this speech, his paladins have been coming up with concrete, often ridiculous suggestions. On 12 March, the leader of Friday prayers in the city of Shiraz announced a fatwa issued by the grand ayatollahs from the holy city of Qom. The fatwa shows what the concerns of these aged men of God in the centre of Shia scholarship are: mobile phones with SIM cards that are able to transmit images are not allowed, said the preacher, quoting the ayatollahs' majority decision and adding that the government must ensure that these picture phones do not become as uncontrollable as satellite dishes.

On the same day, the leader of Friday prayers in the city of Mashhad declared that girls were not allowed to ride bicycles and motorbikes, as this was nothing more than a purely sexual demonstration. But it doesn't end there: for the sake of completeness, the influential Grand Ayatollah Jawadi Amoli also made a precise proposal: the American-style open-plan kitchen is a western invention, he said in response to a query, and represents a cultural attack; the government should not issue permits for the construction of new houses with open-plan kitchens.

Control of the private sphere appears to be so important that it reads like a declaration of victory for the hardliners whenever newspapers report on the discovery of illegal music groups, the arrest of those deemed to be inappropriately dressed or the seizure of illegal CDs or films.

The long arm of the Iranian regime

Whether this is a demonstration of power or an empty threat still remains to be seen. However, there are evidently plans to force Iranians living abroad to observe Islamic norms too. The conduct of Iranians living abroad is the next target, says Colonel Rezadust, vice president of the police force responsible for social matters. Anyone not observing the rules and regulations abroad will have their passports seized when attempting to re-enter the country, the colonel said at a media conference in early March.

Two weeks previously, a parliamentary majority presented a bill banning all single women under the age of 40 from leaving the country. The legislation has not yet been adopted, as on this occasion, rulers were clearly taken aback by the extent and the efficiency of protests against the bill – involving women in particular. The rallies were even joined by many adherents to the Islamic camp. Now, of all things, the ultra-conservative Council of Guardians is calling for amendments to be made to the bill.

Home
Print
Newsletter
More on this topic
Living out of Wedlock in Iran: A Quiet Social RevolutionTurning away from Shia in Iran: "A Tsunami of Atheism"Writers in Iran: Fighting a Losing Battle
Related Topics
Human rights, Islamism | Political Islam, New media in the Muslim world, Media in Iran
All Topics

Drought and upstream water diversions have seen the Zayandeh Rood, "fertile river" in Persian, run dry since 2000, with only rare exceptions. The famed river bridges of the ... END_OF_DOCUMENT_TOKEN_TO_BE_REPLACED

Very different Western reactions to the suffering in Ukraine and the Arab world show that there is a profound rift among cultures. Essay by Michael Young END_OF_DOCUMENT_TOKEN_TO_BE_REPLACED

Since the government cut subsidies for food, prices in Iran have skyrocketed. Protests that broke out in Khuzestan province are now spreading across the Islamic Republic. By ... END_OF_DOCUMENT_TOKEN_TO_BE_REPLACED

United Arab Emirates strongman Sheikh Mohammed bin Zayed al-Nahyan, who was formally elected president on 14 May, has led a realignment of the Middle East, creating a new anti- ... END_OF_DOCUMENT_TOKEN_TO_BE_REPLACED

More than 800 Iranian filmmakers have signed a declaration against sexual harassment, coercion and violence in their industry. The public's response to their willingness to name ... END_OF_DOCUMENT_TOKEN_TO_BE_REPLACED
Author:
Ali Sadrzadeh
Date:
Mail:
Send via mail

END_OF_DOCUMENT_TOKEN_TO_BE_REPLACED
Social media
and networks
Subscribe to our
newsletter