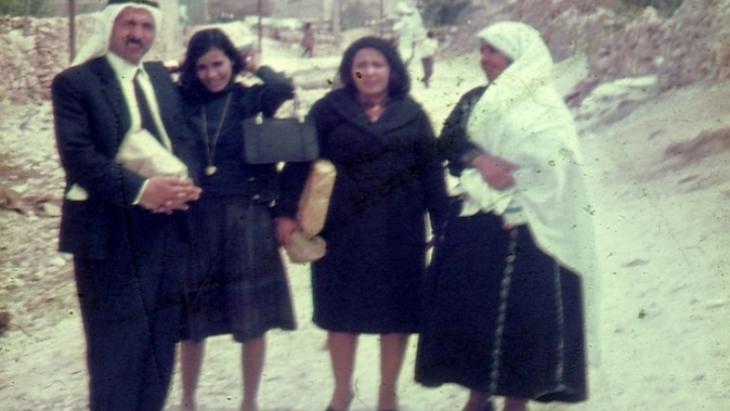 Stories from the Palestinian diaspora

My grandmother, the selfie generation, and I

If young people without immigrant parents have fallen into disrepute for disengaging and emancipating themselves from and rebelling against old traditions and conventions, then even more so those with a hybrid identity. Those whose parents originate from more distant regions of the world. Those like me. By Jenin Elena Abbas

My parents were born in Palestine. My father came to Germany in the late sixties at the age of nineteen to study. My mother followed later on. My parents come from the same village. I belong to the second generation and have already provided for the third generation of German-Arabic presence in the family, as I have now an almost one-year-old son myself.

I remember well how I once sat in a discussion round in Bremen. We were a group of young Germans with Arabic roots and in our midst sat an older gentleman from Egypt. I was still very young then, but I remember very well a teenage girl explaining to the man that it was no longer reasonable to look for partners in the home countries of our parents. I still remember the puzzled look on the manʹs face, but also that his disapproval hardly impressed us.

We were right in the middle of a generational conflict, shaped by the history of our families, their expectations, fears and experience. Because the world in which our parents grew up was a world away from the one in which we now found ourselves.

My parents come from a small Palestinian village that stopped existing more than 60 years ago. And although they themselves did not grow up there, but in a large Palestinian city, my grandparents passed onto them their values and traditions. 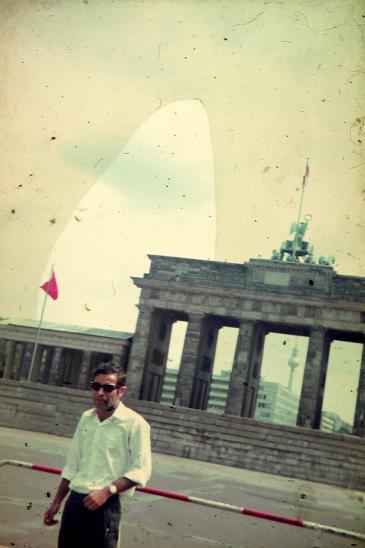 "My father decided to go against the expectations of my parents and moved abroad to study. My grandmother could not accept this until the end of her days. In her view, he should have fed the chickens instead of pursuing a life so far away from her." – Jeninʹs father, Diab Abed, in front of the Brandenburg Gate in Berlin in 1967

This included, for example, the importance of extended family. Several generations live under one roof or next door to each other. Children are taught respect towards their elders and loyalty. The next generation is a guarantor for oneʹs welfare in old age. After all, there is no state-funded support. If you let your children go, then only to have them close to you once more later on.

The world I grew up in consists of nuclear families. I grew up with neither grandparents nor uncle or aunt. Nor do I remember knowing anyone whose extended family had any influence on their life.

The world I grew up in seeks to raise their offspring as independent. They learn early how to make decisions on their own. They leave the parental home early, enter relationships, have shared living arrangements. Their first job serves to increase their self-sufficiency. In the world I grew up in, these are all experiences that are meant to be lived in order to develop yourself. Self-determination as the highest good.

In cultural psychology, societal structures that assign great importance to family and community are called interdependent. Those structures that are focussed more on the individual are called independent. My family has therefore been confronted with opposing concepts of life – and thus also of education – over several generations.

For immigrants like my parents, my siblings and I were probably not quite the perfect offspring, not quite how they wished us to be. As school children, we were hardly interested in learning Arabic and on the weekends we were – more often than not – out and about until late at night. During adolescence, we most likely did not behave with enough respect towards our relatives.

That said, the question is whether we experience this generational conflict really just because our families have a migrant background. Can we blame it all on culture and origin, or have Palestine, Egypt or Turkey and all the other countries of origin already changed from what they were in the past?

When my father went to visit his mother during the summer holidays and arrived at her house in a taxi, he used to be greeted by dozens of people waiting there for him. Everyone knew and was neighbourly with each other. If someone came and could not find the house of a friend, all they had to do was ask the neighbours where a certain family lived. Back then, when an important holiday was approaching, the people of the neighbourhood met to prepare and make pastries together. They shared their food and looked after each other.

But itʹs no longer like that. Even in their home village, the life and the people that my parents left behind have changed. Many families do not live next door to each other or under one roof anymore for personal or financial reasons. Life has become more anonymous; the village you come from is no longer decisive for your relationships. Sharing, neighbourliness, common rituals. A lot has changed. 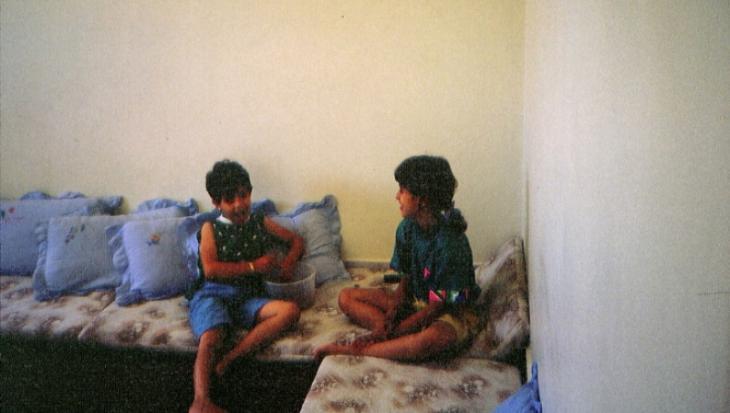 Growing up in two different worlds: Cousin Nour (left) with the author at their grandparentsʹ house in Gaza City, Palestine, 1989

Intergenerational conflict is nothing new

However, conflicts between generations existed decades ago as much as they exist today. My grandfather would not speak to my uncle for weeks when the latter decided to let his hair grow long, ABBA-style.

And my father decided to go against the expectations of my parents and moved abroad to study. My grandmother could not accept this until the end of her days. In her view, he should have fed the chickens instead of pursuing a life so far away from her.

My now 82-year-old maternal grandmother needed some time to get used to the many selfies that her grandchildren are taking. And the long-haired uncle now has a very headstrong son himself, who, mindless of his parentsʹ criticism, wears his hair and beard in proper hipster-style.

I am certain that I will not understand everything that my son does in fifteen years. I will probably just shake my head in disbelief at many things, irrespective of where and how exactly he will grow up. The selfie hype, for instance, is already something that has passed me by. In that regard, I can understand my grandmother very well. In ten to twenty years, my child will be occupied with new types of media and trends that will be alien to me.

In my opinion, the conflict, or rather dialogue, of generations is something that occurs naturally in the course of time. After all, it serves the development of both the individual self and society.

Home
Print
Newsletter
More on this topic
Germany’s identity crisis: We are the people, tooIsraeli-Palestinian relations: Entering a new era?Palestinians in purgatory: Eternally displaced
Related Topics
Migration, Migration in Germany, Muslims in the West
All Topics

Renewed protests and violent clashes with Israeli security forces at the weekend have prompted the court hearing scheduled for 10 May to be postponed. Yet it remains unclear what ... END_OF_DOCUMENT_TOKEN_TO_BE_REPLACED

Isabella Hammad’s "The Parisian" is an engaging and accomplished debut based on the life of her great-grandfather. Set during the end of the Ottoman Empire and the rise of ... END_OF_DOCUMENT_TOKEN_TO_BE_REPLACED

In her documentary, the young Palestinian filmmaker Samaher al-Qadi gives us a passionate and very personal view of what it means to be an Arab woman. Her film explores the ... END_OF_DOCUMENT_TOKEN_TO_BE_REPLACED

Jordanian author Amjad Nasser, who died in 2019, presents an impressive tale of homelands, life in exile and the hardships of returning home. His profound eloquence and use of ... END_OF_DOCUMENT_TOKEN_TO_BE_REPLACED

In 2012, fed up with people expressing clear-cut opinions on the rights and wrongs of the Middle East conflict, Canadian conflict researcher and long-time Israeli resident Corey ... END_OF_DOCUMENT_TOKEN_TO_BE_REPLACED

END_OF_DOCUMENT_TOKEN_TO_BE_REPLACED
Social media
and networks
Subscribe to our
newsletter