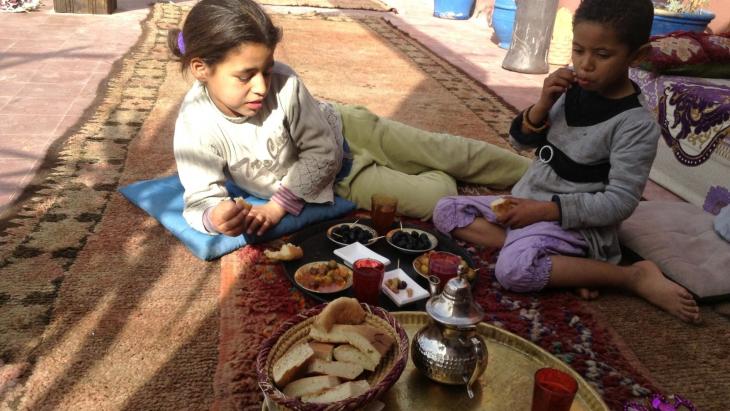 Street Children in Marrakech
The Oasis of Sésame Garden

Some 10 million tourists visit the Kingdom of Morocco every year. But very little of the income they generate trickles down to the socially disadvantaged. In Marrakech, a lone restaurateur is making a real difference to the lives of street children. A report Astrid Kaminski

The restaurateur Majid Sahoul bought a silver-coloured children's moped helmet at the flea market. Now at last five-year-old Abdelrahman can join him on a little spin. Big cheers. No, it actually sounds more like neighs. He's neighing like a horse. Why? Because he'd really like to be one! And he'll be eating plenty of vegetables and salad from now on – in the hope that his shoulders will sprout wings.

This little Pegasus fantasy was dreamt up in Marrakech. Little Abdelrahman with the stained white jacket and the droopy left eye is one of the street children who come to the Restaurant Sésame Garden, close to the world-famous Jemaa El Fna Square, each and every day. These are the very same children who, whenever they beg or try to sell tissues, are so often sent on their way by countless tourists with a waft of the hand, as though they were flies.

Children paying for the rent

"It's the locals who give us money, the tourists don't appreciate our situation," says nine-year-old Merieme. Like many of her peers, the frail-looking girl lives with her mother and four siblings in a tiny shack in a rear courtyard of the Medina of Marrakech – a place with fairytale credentials. The family pays a daily rent of 60 Dirham, or six Euros. Fall five days into arrears and they could end up on the street. The children feel it is their responsibility to earn money to pay the rent, as well as for food and clothing.

In the summer when it's 45 degrees in the shade, and during windy and cold winter nights, the children are always here on the famous square, selling tissues, balloons or flowers – until late in the night – outside the clubs and casinos situated on the edges of the Medina. Often, schooling is a low priority. And even when she did try to go to school, timid Merieme says in her quiet voice, the teacher would often present her to the other students as the "beggar from Jemaa El Fna". Now she attends a different school, one for socially disadvantaged children offering half-day tuition, and she goes as often as she can. Her new teacher is totally different, Merieme beams. 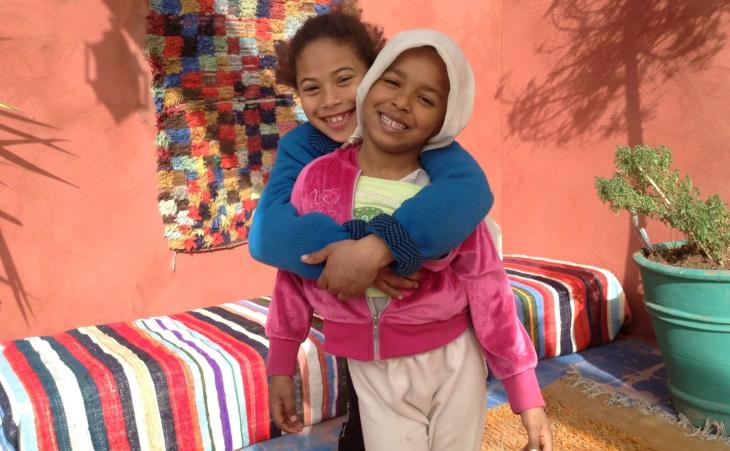 Refuge and oasis of security for Marrakech's street children: for them, Majid Sahoul's "Sésame" restaurant is nothing short of a small miracle, Astrid Kaminski writes

Majid Sahoul brings her a glass of milk from his restaurant kitchen and nods. He's also relieved at the positive interaction between the teacher and the children. She has even stopped by to visit his restaurant, he says, and sat on the terrace. He has also personally registered several children for lessons.

Not long ago, three thirsty boys changed the restaurateur's life in a dramatic way. They asked him for a glass of water, and because their request was not refused, they came back. They began talking to him and playing games; the number of children steadily grew. Majid Sahoul wondered how he could combine the two – a restaurant and kids who never get to eat a hot meal? He began offering the children free couscous every Friday.

Now, the children can sit down to a proper meal together every evening in the restaurant. The terrace is also open to the resilient survivors during the day. There's a trunk full of toys – balls and pens, puzzle and homework books, and a carpet to play on. Sometimes volunteers stop by to help Sahoul – who is something of a Godfather – to organise an afternoon activity programme for up to 100 children.

Sahoul does possess great natural authority, but he is neither a teacher nor a social worker. The children's problems present him with a huge challenge. Sometimes he fights back the tears when he's talking about them, a well as his own mistakes. At times, when the children fight, he sees no other solution other than to ban them periodically. The children respect this, although there is no better place for them than the "Sésame". Ten times, Merieme counts on her slender fingers, she's spent a day in police custody. As part of a policy to clean up the city's image. But the best day of her life was the day she was taken to Majid.

For the children, the "Sésame" is quite obviously nothing short of a small miracle. But what they don't know: Despite its impressive roof terrace and the live music in the evening, the restaurant is no gold mine. The rents in downtown Marrakech are comparable with those of the most expensive big cities.

In the meantime an association has been set up for the children, but meetings with the city council on how this might be more effectively supported have thus far been fruitless. Just as in other Islamic nations, social welfare in Morocco is just one of a range of religious obligations. And where these do not deliver, under-financed and sometimes disorganised aid organisations are left to fill the gaps – and mostly this does not go far enough. A health insurance policy is a luxury. 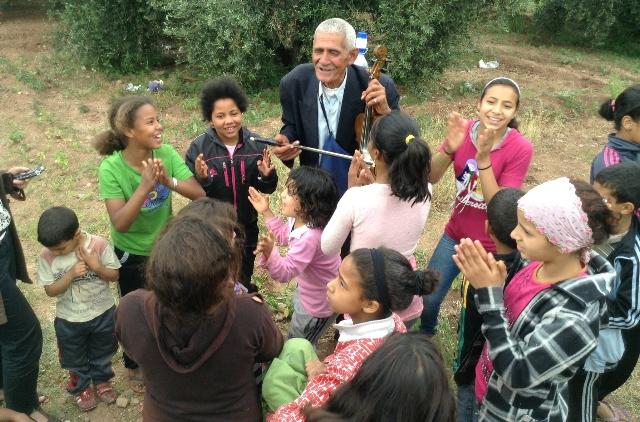 Music, flic-flacs and high-spirited dancing: Majid Sahoul's children on one of their Sunday outings to the Menara Gardens, a huge olive grove in the centre of Marrakech

Now and again, the restaurant owner has even had to pay for the children to see a doctor. But as eleven-year-old Ikram recalls with a giggle, he did personally cut open the plaster cast on her arm to save money.

Women with no rights

Many of the children's mothers are quite simply no longer in a position to fulfil their parental responsibilities. Many of them are also dependent on medication, even if only as a sedative. A girl that after being asked several times finally agrees to look for her mother ends up standing alongside a woman who is lying on the ground responding to neither calls nor touch.

Women who live without men – either because they were raped or deserted, but also because their partners have died – barely stand a chance in this patriarchal, misogynistic society – a fact also confirmed by women's rights campaigner Halima Oulami, who opened the first women's refuge in Marrakech with no help from the state.

Even if the women find a cleaning job or similar, they are treated more or less as though they have no rights. Rape and the non-payment of wages are everyday occurrences.

It's getting late, some of the bigger and smaller children are listening to the heated discussion, and snuggle up to the visitors as closely as they can in the process. On the terrace of the Sésame Garden, physical contact is of paramount importance. Majid Sahoul can barely go anywhere without a child hanging on his arm. When he takes "his children" on one of his Sunday outings, they go to the Menara Gardens, a huge olive grove in the centre of Marrakech.

There are three adults supervising the group, the children hang on to every free hand – anything they can as a way of seeking a connection and expressing affection.

After a picnic, lots of somersaults, flic-flacs and high-spirited dancing, it's back to the Medina past the Hotel Mamounia. The Mamounia is the royal hotel in Marrakech, and the children spontaneously strike up a song in praise of Mohammed VI, the self-proclaimed "King of the poor". It could just as well be a demonstration – but the irony of the situation is lost on everyone apart from Majid Sahoul and the liveried doormen who are trying to usher their mega-rich guests into limousines.

Back on Jeema El Fna Square it's a familiar evening scene; the steam is rising from the cookshops and the drums have begun beating out the frenetic rhythms of the night – this is the Orient that the tourists come to see. Sahoul is exhausted, and the long night's work at the restaurant hasn't even begun. How does he manage the incredible demands on his time and energy – made by both the children and the business of running a restaurant?

"When you get to know the children, you also learn to love them," is his answer. Then he distributes the packets with tissues and the day continues as it always does for the children too. Merieme, the five-year-old deaf and dumb Saana, little Abdelrahman, the wonderful singer Ikram and all the others will go off to work until late into the night. If things go well, they'll earn 20 to 30 Dirham, or two to three Euros, half a day's rent.

Tourists have been returning to Tunisia, Egypt and Morocco. But, given the global uncertainty caused by the Ukraine war, will the comeback be enough to save a struggling sector, ... END_OF_DOCUMENT_TOKEN_TO_BE_REPLACED

By 2050, the Middle East and North Africa could be dealing with many more elderly people suffering from dementia. A lack of facilities, specialists and local knowledge means the ... END_OF_DOCUMENT_TOKEN_TO_BE_REPLACED

Tunisians are set to vote on a new constitution on 25 July. The prominent lawyer and women's rights activist Yosra Frawes fears the referendum could facilitate a return to ... END_OF_DOCUMENT_TOKEN_TO_BE_REPLACED

For the first time since 1989, Algeria‘s authoritarian regime has sent a military parade marching through Algiers. A formidable show of strength designed to impress rival regional ... END_OF_DOCUMENT_TOKEN_TO_BE_REPLACED

Comments for this article: The Oasis of Sésame Garden

Majid Sahoul and The Oasis of Sesame Garden

Sound like Mahid Sahoul is a high spirited beautiful soul. Like an Angel for those street children who are cruelly treated like summer flies by their own community and visitors.
You can tell by their precious faces how bright they are and how grateful to someone like the good Majid whom so generously open his heart and spiritual garden for them forever.
God bless him and the children!!

In this awful world, how uplifting to hear about this wonderful and huge hearted man.
Especially when Majid has his own personal problems & difficulties, and when survival is a constant struggle even for him. What a generous heart he has, and shame on the rich tourists who are ignorant to the real hardships of these street children! Majid is an inspiration to us all. I hope that many people will read & be educated by his story and open their hearts!
God bless you Majid & your children.
I will look you up the next time I am in Marakech, hopefully this October.

END_OF_DOCUMENT_TOKEN_TO_BE_REPLACED
Social media
and networks
Subscribe to our
newsletter