The End of the Beginning

More than a year after the signing of the peace accords between the government and southern rebels, Sudan is as torn apart as ever. While Khartoum is asking for more patience, those in Juba already regard the unity of the state as a lost cause. Marc Engelhardt reports 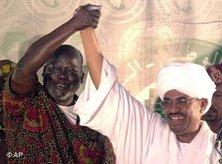 President Bashir (right) holds hands with leader of the Sudan People's Liberation Army. Garang set foot in the capital for the first time in 22 years July 2005, ahead of his swearing in to the position of first vice president.

​​Salva Kiir is a traveler between two worlds. The successor to John Garang, the populist leader killed in a helicopter crash, spends half his time as president of southern Sudan in the region's capital Juba. The rest of the time, he is in Khartoum as Sudanese vice-president.

More than a year after the peace agreement between the north and south of Sudan, Kiir is one of the few who knows both sides. Yet, he doesn't like what he sees. "I am not calling out for separatism, but I am the leader of the south Sudanese. And, presently, unity doesn't seem particularly attractive to us."

Waiting for the peace dividends

According to Kiir, the peace dividends promised by the West have yet to materialize. Nor have the agreed upon half of all oil proceeds, which were to be transferred from the north. Most people in Juba remain destitute and unemployed. The homeless lie in the streets. There is no electricity, no reliable telephone network, and only one road close to the Ugandan border.

The southern Sudanese would like to use this route for trade and the delivery of aid supplies. Yet for months, this transport artery has been rendered unsafe due to raids by the Ugandan "Lord's Resistance Army" (LRA) and other armed groups.

The Sudan People's Liberation Movement (SPLM) also has problems within its own ranks. Long-serving guerrilla fighters have been transformed over night into leading government officials, while their ministerial bureaucracy is still non-existent. Not even all of them are literate. And almost none of them know what exactly is expected of them.

The situation is similar in the south Sudanese parliament, which meets in the former main auditorium of the University of Juba. Parliamentary Speaker James Wani Igga summarized the impatience of the south Sudanese population. "Our people have suffered for ages and now they expect us to deliver – and we can't fulfill their expectations as we don't have the finances."

The wish list is long – streets, microcredit, education, hospitals, and a new university. Wani Igga would not only like to have the financial resources, but, above all, foreign specialists to help implement the projects. After more than twenty years of civil war, hardly any south Sudanese has even a basic education – with the exception of the millions that fled to Khartoum or neighboring countries. And it is namely those who had fled from the liberation struggle that are now getting the best jobs. This is difficult for the south Sudanese to accept and it poses a challenging problem.

Officials in Khartoum remain composed in the face of such problems. Some six months ago, a coalition including the participation of the SPLM replaced the one-party government of President Omar Hassan el-Bashir's Arab-Islamic National Congress Party. According to the peace treaty signed on January 9, 2005, the coalition is supposed to govern the largest country in Africa until 2011. Only then will the inhabitants of the south be allowed to decide on independence.

"There is a lot of time until that date," says Bona Malwal from the SPLM, who has been serving as an advisor to el-Baschir for the last few months. "No one can expect that all the problems will be solved in the first year." Malwal recommends more patience.

Regime critics condemn Malwal and others as opportunistic war profiteers. Since the signing of the treaty in Naivasha, some of these men have in one form or another accepted governmental posts. They all have villas in Khartoum, a good income, and absolutely no plans to return to the devastated south. "The dictatorship of one party has been replaced with a dictatorship of two parties," sums up a Sudanese political scientist, who used to work for a German foundation and does not wish to see his name published.

"It is true that el-Bashir has given the SPLA seats at the cabinet table, but it is still his table – and he makes the rules." Another problem is that the north Sudanese are more than a match for their new partners from the south. "El-Bashir's people are educated, experienced political tacticians, and also have a massive secret police apparatus and the mass media under their control." In his view, by joining the government, the SPLM has rather strengthened than weakened its once archenemy.

These developments have particularly disappointed the political opposition in the north. Former President Sadiq al Mahdi and his moderate Islamic Umma Party had hoped to be able to once again join in the political process in the new Sudan. Instead, says al Mahdi, the peace treaty has cemented the rule of those in power.

El-Bashir, who in 1989 overthrew the democratically elected al Mahdi in a military putch, caters exclusively to a small clique of influential persons in Khartoum and Port Sudan. The rural population are the losers.

This is where the hope lies for opponents of the regime. After the uprisings in the south and in Darfur to the west, new conflicts are simmering, and these might bring about the downfall of el-Bashir. In the center of the country, war threatens to break out between Arab nomadic tribes from the north and African Dinka farmers from the south. Just as explosive is the situation in the east of the country on the border with Eritrea.

Opposition in the Arab-Islamic north is even beginning to form against the central government. Southern Sudanese President Kiir sees parallels to the past. "The SPLM fought a civil war prompted by discrimination from Khartoum. Yet, those in Khartoum have learned nothing." It seems as if the oppressed all over Sudan have finally had enough and are now ready to take the offensive.

Fred Halliday
Sudan between War and Politics
In Khartoum, Middle East expert Fred Halliday of the London School of Economics assesses the future of an Islamic regime relieved by peace in southern Sudan, pressed by the International Criminal Court over Darfur, and seeking a political road beyond revolution

Anniversary Peace Agreement Sudan
"You Can't Eat Peace"
The practical implementation of the peace agreement in Sudan poses a momentous challenge for both the government and the population. The international community is providing support in the form of assistance work and generous financing. Lennart Lehmann reports

Rap Music from the Sudan
Emmnuel Jal's Vision of Peace
Emmnuel Jal was forced to go to war as a child soldier in the Sudan People's Liberation Army. Now he is an up-and-coming star of the Sudanese and West African music scene with a political message for a worn-torn country. Max Annas reports

END_OF_DOCUMENT_TOKEN_TO_BE_REPLACED
Social media
and networks
Subscribe to our
newsletter