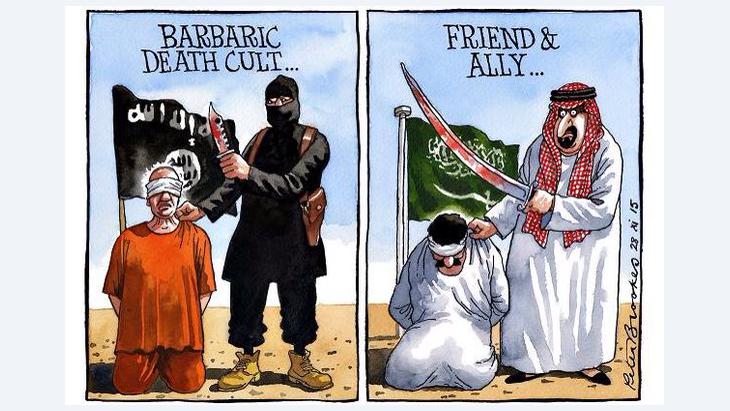 The official did not define who the Twitter user was or what the potential punishment would be, but he did succeed in accidentally creating two hashtags: #SaudiArabiaIsISIS and #SueMeSaudi. Comparing Saudi Arabia to terror group "Islamic State" had already become more common ever since Palestinian poet Ashraf Fayadh was sentenced to death for "spreading atheism and disrespecting the prophet" in November.

But it was the threat of legal action against the Twitter user in Saudi Arabia that has encouraged other Twitter users throughout the world to openly defy and even taunt the Saudi government.

One image that's being tweeted and retweeted is an image originally created by the online news portal MiddleEastEye.net that breaks down and compares Saudi Arabia's policies with those of IS.

Online scrutiny of Saudi Arabia has increased dramatically ever since the country convicted blogger Raif Badawi to 1,000 lashes for apostasy. He has received 50 so far, with weekly Friday protests – both offline and online – having raised international awareness about his plight.

The poet Ashraf Fayadh has 30 days to appeal this conviction. He maintains the accusations are false – as he has since he was first tried and found guilty of the crimes in 2014 before being retried.

Human Rights Watch, which has seen Fayadh's trial documents, says the charges include blaspheming "the divine self" and the Prophet Muhammed, spreading atheism, mocking the verses of God and the prophets, refuting the Koran and having an illicit relationship with women and storing their pictures on his phone. In theory, Fayadh's conviction could result in his beheading.

Saudia Arabia has executed more than 150 people in 2015, the most in decades. The majority of these beheadings are due to murder and drug charges.    (DW)

In his book "Ground Zero: 9/11 und die Geburt der Gegenwart" (Ground Zero: 9/11 and the Birth of the Present) Islamic scholar Stefan Weidner analyses the consequences of the ... END_OF_DOCUMENT_TOKEN_TO_BE_REPLACED

The rollout of coronavirus vaccines in the Middle East and North Africa is already taking place on a massive scale, with the United Arab Emirates leading the way. Nevertheless, ... END_OF_DOCUMENT_TOKEN_TO_BE_REPLACED

The Prophet Muhammad never executed anyone for apostasy, nor encouraged his followers to do so. Nor is criminalising sacrilege based on Islam’s main sacred text, the Koran. In ... END_OF_DOCUMENT_TOKEN_TO_BE_REPLACED

Surging coronavirus cases in many parts of the world have overshadowed the start of this year's Muslim holy month of Ramadan, with festivities once again curtailed by contagion ... END_OF_DOCUMENT_TOKEN_TO_BE_REPLACED

As Qatar prepares to host the 2022 FIFA World Cup, the country has come under fire for its treatment of migrant workers, with some nations calling for a boycott of the contest. ... END_OF_DOCUMENT_TOKEN_TO_BE_REPLACED

German Middle East analyst Guido Steinberg and television journalist Ulrich Tilgner have both published new books on the conflicts in the Middle East. Their analyses and their ... END_OF_DOCUMENT_TOKEN_TO_BE_REPLACED
Author:
Conor Dillon
Date:
Mail:
Send via mail

END_OF_DOCUMENT_TOKEN_TO_BE_REPLACED
Social media
and networks
Subscribe to our
newsletter