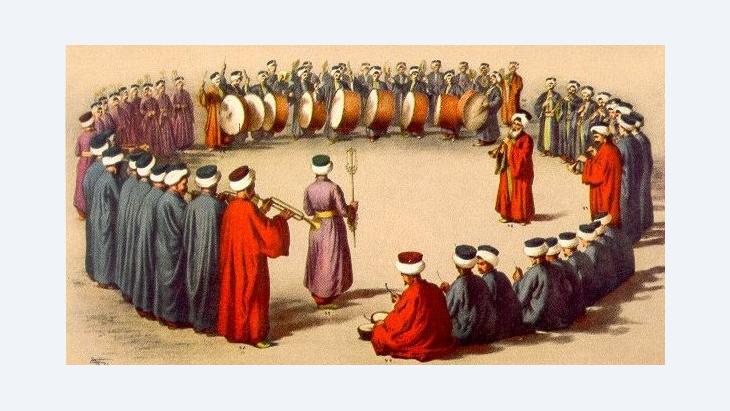 Sufi Orders in South-West Kosovo
The Dervishes of Prizren

﻿Although Kosovo is a mainly Muslim country, religion only plays a subordinate role in its society, which is why people are tolerant towards alternative interpretations of Islam, such as that of a dervish order that has been based in the country for a few hundred years. Thomas Fuster reports

On 14 December 2001, Abidin Shehu's life changed forever. Before this date, Abidin was a young man like any other in Prizren: he sped through the city streets on his motorbike, hung out in discos, and – according to city residents – would have liked nothing better than to become a DJ. But his career as a DJ wasn't to be; the serious side of Abidin's life began in earnest on that December day when, at the tender age of 19, he became the head of the dervish order that has been based in Prizren, a city in southern Kosovo, for nine generations.

The responsibility – and the burden – of one's family roots becomes apparent when one enters the so-called "tekke", the centre of the order, in the picturesque old quarter of Prizren. Directly at the entrance to the tekke and visible for anyone passing by on the street, are the sarcophagi of past leaders of the order, draped in green velvet.

If this centuries old tradition continues, Abidin's mortal remains and those of his son will one day be laid to rest in this mausoleum. According to the local custom of these dervishes, leadership of the community passes from father to son, from one generation to the next.

Anyone who works in the midst of his deceased forebears and is constantly reminded of his own mortality could be forgiven for being melancholy. But Sheikh Abidin, as this father of two is respectfully known, gives the impression of being a carefree man. Dressed in blue jeans and an olive green sweatshirt, he takes a seat in the reception room of the tekke and starts relating its history. His story begins in the year 1713, when this branch of the Halveti order was established by Sheikh Osman. Since then, it has survived a number of wars and conflicts. Standing in the secluded inner courtyard, surrounded by artistic stone figures and fountains, one has the sensation of being in a place where time can do no harm.

Opposite the reception room is the circular prayer-room, which is decorated with oriental carpets and Ottoman calligraphy. This is where the members of the order meet every week for their religious rituals. These rites are known as dhikr in Sufi Islam, on which the beliefs of these dervishes are based. Every order has its own dhikr. They range from silent meditation to rhythmic chants and loud, apparently ecstatic dances. When people in the West think of dervishes, they generally think of rapidly twirling dancers in flowing robes.

But there is more to the tekke than just contemplation and trance. Much of what Sheikh Abidin does seems very worldly. After all, as the leader of an organisation that counts 20,000 men and women among its members and is funded solely by donations, Abidin is something of a manager too.

When asked about the most difficult decision he had to make in the past month, the sheikh mentions the weighing up of the pros and cons of acquiring a stake in a gardening company in the region. He spends most of his days receiving guests, who come to him seeking advice. The advice relates to both private matters (e.g. whom to marry) and economic matters.

No involvement in politics

For this reason, the movement was held under general suspicion during the Communist era. Abidin explains that although the dervishes were not officially banned, the regime pursued a policy of obstruction behind the scenes. 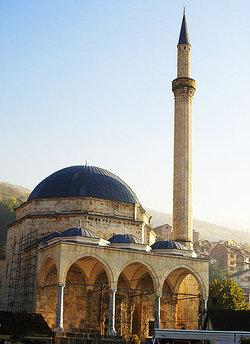 The Kosovo dervishes benefit from the fact that religion plays a subordinate role in society, writes Fuster. Pictured: Sinan Pasha Mosque in Prizren (completed in 1615)

​​For example, it was not unknown for people who invited the sheikh of the dervish order to a wedding celebration to be hauled into the police station for no apparent reason that evening. He explains that people at the time had no idea what was tolerated and what was not.

Following the death of his grandfather, who often clashed with the Communists, the powers that be did not allow his remains to be laid to rest in a sarcophagus in the tekke. He had to buried. His remains were later transferred and laid to rest alongside his ancestors, as stipulated by tradition.

The order also remained aloof during the Kosovo War of 1998/99. This was a credible decision insofar as the dervishes hold with Sufi pacifism and rarely take up arms. Because of their liberal interpretation of the Koran, there is no common ground between their beliefs and those of Muslims who adhere to radical or political interpretations of Islam – such as the Wahabis – which is why the dervishes hardly fit the negative stereotype of threatening Islamism.

Nevertheless, they were not left untouched by the war years. In Orahovac – alongside Prizren and Gjakova, another dervish stronghold in Kosovo – an elderly sheikh was murdered; five tekkes were also destroyed and valuable libraries were burned to the ground.

But the dervishes have seen many conflicts come and go in modern-day Kosovo. The Islamicization of the region, which was previously predominantly Christian, began in the fifteenth century, almost at the same time as the Ottoman conquest. In was only in about 1800 that the majority of the population was Muslim. The high taxes that Christians were required to pay certainly played a role in conversion.

For Orthodox Serbs, changing their religion was also a kind of insurance against Muslim attacks. This is why periods of Islamicization often followed Ottoman military crises because the tax burden on Christians and the aggression they faced increased at these times.

Although it was Sunni Islam that spread throughout the country and is now the main religion in Kosovo, dervish orders also spread from Anatolia in the East. Despite the fact that they were clearly in the minority, the orders and their mysticism attracted people from all walks of life.

The rites involved, which in contrast to Sunni practices also included dance and music, promised a more personal and direct relationship with God. This appealed not least to less educated Christians because the Sufis adapted their convictions in a very uncomplicated way to suit local Christian traditions, which made it easier for people to convert to this heterodox form of Islam. 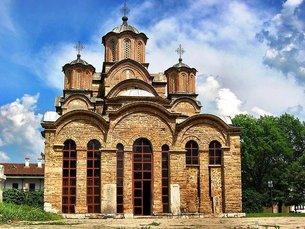 Pressures on non-Muslim 'dhimmis': For Orthodox Serbs, changing their religion was also a kind of insurance against Muslim attacks, writes Fuster. Pictured: the Serbian Orthodox monastery of Gračanica, established 1321

​​It is not clear just how many Kosovans are currently members of dervish orders. There are a number of reasons for this. Firstly, the group is not listed separately in religious surveys, but is lumped together with the large majority of Muslims, which includes Albanians, Muslim Slavs, Romani, and Turks.

Secondly, individual tekkes only keep records about the size of their own order, which is why there is no official data on the total number of Kosovans who belong to one of the over 50 tekkes in the country. It is estimated that up to 5 per cent of the 1.77 million people in the country belong to this group.

The relationship between the dervishes and other Muslims is easy-going, especially in Prizren, which has always been considered a melting-pot of different cultures. Because the dervishes have been living their traditions here for centuries, people have got used to each other.

﻿Religion on the side

The dervishes' liberal interpretation of Islam does not meet with the approval of some Sunnis, for example the fact that some orders do not require the separation of the sexes for prayer rituals or do not consider drinking alcohol an evil. Some critics also condemn the dervishes' emphasis on the unity of existence because they feel it equates God with the universe and, consequently, is a form of pantheism.

Nevertheless, these differences do not result in loud disputes. The dervishes, whose rituals were banned in Turkey when Atatürk proclaimed the republic, benefit from the fact that religion plays a subordinate role in Kosovan society. Moreover, the war between the Albanian majority and the Serbs was not principally a conflict between Muslims and Orthodox Christians.

The Kosovo Albanians do not define their identity through religion, but through their language. As Pashko Vasa, a nineteenth century Albanian writer once said: "The religion of the Albanians is Albanianism." This still holds true today.

According to an analysis by the International Crisis Group, this comparatively unreligious environment is the reason why the dervishes have played a much more important role in Kosovo than in every other Islamic society in the region.

Although there are also dervishes in neighbouring countries – namely in Albania, western Macedonia, or in the Preševo Valley in southern Serbia – the Kosovo Albanians' aversion to having an Islamic identity imposed on them or to religion getting involved in politics, can only have bolstered their tolerance of other religions and other interpretations of Islam.

Sheik Abidin exudes the aura of a composed man with his feet firmly on the ground. He considers his leadership of the order not least to be an honest job that is free of all snobbery.

Unlike in Turkey, where the dervishes have been reduced to mere tourist attractions in view of the state's rigid control of all things religious, the Kosovan dervish orders remain firmly anchored in the day-to-day lives of their members. People knock on the sheikh's door, ask his advice, pray with him, and go back to work. This forges bonds that remain strong down through generations and across national borders.

During the visit to the tekke, we meet a Kosovan who has been living in Switzerland for years. He assures us that his visit to the dervish order is always his top priority when he spends his holidays in his native town.

END_OF_DOCUMENT_TOKEN_TO_BE_REPLACED
Social media
and networks
Subscribe to our
newsletter