Sufism
A Soft Form of Islam?

Sufism, Islamic mysticism, enjoys great popularity in the West, including in Germany. One of the reasons for this is that Sufism seems far removed from orthodox Islam. This is only half right, as Inga Gebauer discovers 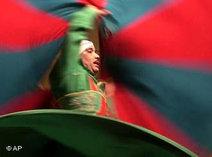 ​​The history of Sufism is, basically, a success story. Islamic mysticism has succeeded in spreading itself over a large part of the world – from India to Iran, from Turkey to North Africa, and even in Europe there are today numerous Sufi orders.

On the other side, the history of Sufism is one marked by persecution. From very early on, mystics were persecuted or even killed by the rulers of Islamic countries. This was frequently justified with religious arguments, such as the charge of polytheism, which is one of the worst sins according to Islamic faith.

The mystics actually recognize God in all things, as, from their viewpoint, everything comes into being through God as the sole creator. Such beliefs have at times been mistakenly construed as advocating polytheism.

In addition, many mystics, either in a state of trance or caught up in their overpowering yearning to be perfectly absorbed in God, have let themselves be carried away to make statements that were condemned as heretical. For example, the great Sufi Al-Hallaj proclaimed, "I am the Truth," by which he meant that he had discovered the divine within himself. He was subsequently executed by the authorities.

Ambivalent relationship with the authorities

Yet, political considerations also proved decisive in moves to persecute Sufis. Starting in the 12th century, the Sufis organized themselves into brotherhoods, which were particularly popular and highly respected among the ordinary people, so much so that many Sufis were honored as saints.

Accordingly, members of orders possessed a high degree of spiritual and financial power, as well as exerting a great influence on the population, which made them potentially dangerous for the authorities.

Even today, the relationship between state authorities and the Sufis is not harmonious in all countries. Last year, for instance, a fatwa was issued in Iran against Sufism, condemning it as unreligious and un-Islamic. In many parts of Saudi Arabia, the establishment of Sufi orders is forbidden.

In many other countries, by contrast, Sufis are held in high esteem. For example, as a result of efforts by Turkey, Egypt, and Afghanistan, the year 2007 was declared Maulana Year in honor of the renowned mystic of love Maulana Jalal al-Din Rumi, also regarded as the founder of the Mevlevi Order, better known as the "Whirling Dervishes."

The fascination with high spirituality

To this day, the fascination evoked by Sufism remains unbroken. The secretive elements and the high spirituality of mysticism are its attractions. For the Sufi, religious practice is less about proving the existence of God on the theoretical level than delving into one's own spirituality as well as the bodily experience of the present moment.

The Sufi is on the pathway to God, or, at the very least, is in his vicinity. The uppermost goal of a mystic is to remove the veil dividing oneself from God and to fully immerse oneself in loving him.

This is achieved via a variety of religious practices and exercises, such as long periods of fasting or the so-called "Dhikr", a type of awareness of God, which includes the constant repetition of specific formulas linked to breathing exercises.

Precisely on account of this idea of the ability to experience God and the initially unorthodox appearance of Sufi practices, Islamic mysticism is frequently cast as being far removed from strict Islamic law. On the one hand, there is some truth to this view, as Sufism is a completely independent Islamic tradition of beliefs that cannot be compared to the religion’s strict orthodox forms, such as Wahhabism or Salafism.

Despite this, the Sufis are deeply rooted in Islamic belief. As Muslims, they strictly conduct themselves according to the Koran and the Sharia, although admittedly in keeping with their own interpretations.

This close bond with Islam can also be seen in the reverence held for the Prophet Muhammad. The Sufis generally regard him as the very first mystic and as an absolute model for the true faith. Many Sufis, such as the great Ibn Arabi, have gone so far as to elevate Muhammad to the state of a "perfect human being."

To regard Sufism as a soft form of Islam or even as un-Islamic is completely false. The Sufis are deeply religious Muslims, whose everyday life is determined by Islam. One should instead view Islamic mysticism as one of the many forms of Islamic belief and its follows are thereby no less rooted in their faith than the advocates of other Islamic religious traditions.

Translated from The German by John Bergeron

Comments for this article: A Soft Form of Islam?

Thank you for the article. I feel that it did not, however, present a holistic view of Sufism, considering that so many of the great warriors in the history of Islam have been Sufis.

END_OF_DOCUMENT_TOKEN_TO_BE_REPLACED
Social media
and networks
Subscribe to our
newsletter