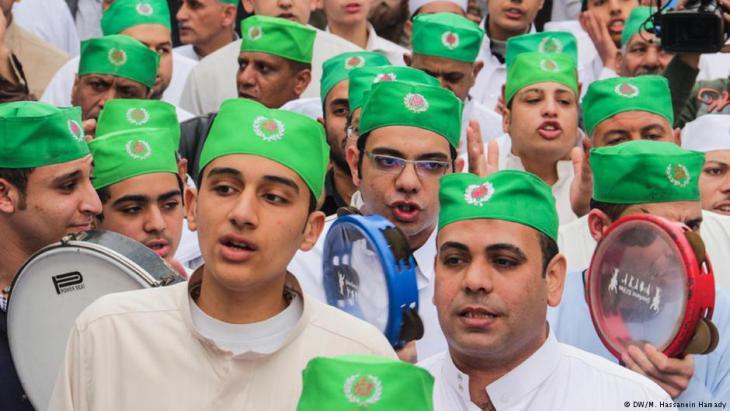 Egyptian Sufis have been on the defensive against the country's Islamists for decades. Meanwhile, interest in mysticism is growing among the young members of Cairo’s middle and upper classes. By Marian Brehmer

The air in Cairo’s Sadat metro station could hardly be stuffier. Fans hum above the heads of waiting passengers while a portly gentleman slides paper tickets through the counter slot. Behind a steamed-up pane of glass stands a statue of the Egyptian goddess Isis, who gazes motionless at the restless, bustling crowd. Beside her hangs a heavily scratched map of the Nile metropolis' underground network.

Arriving in Maadi, a well-to-do neighbourhood in the south of the Egyptian capital, you pass by a Coptic church, from which children's singing can be heard. In a nondescript block of modern apartments, a flight of stairs leads up to a flat where a group of Sufis have gathered for their weekly meeting.

The living room is elegantly furnished, with Arabic calligraphy and pieces of abstract art hanging side by side on the walls. Five young women are sitting on the sofa before their Sufi master, who leads the meeting. Khaled (not his real name), a middle-aged man with a narrow, earnest face, runs a string of prayer beads through his fingers.

Khaled is a member of the Shadhiliyya order, one of nearly eighty officially recognised Sufi brotherhoods in Egypt. Here in Maadi he is carrying on his Sufi teaching in a modern form, uncoupled from the traditional order structures in which he was brought up. The other people present are female students and businesswomen, who are at home in Cairo’s fast-moving professional life. The Sufi meetings offer them an oasis of calm in this frenetic city, the most densely-populated city in the Arab world. More than twenty million people live within its outer limits.

Khaled asks the women in the room how the wazifa is going, the exercise that a master assigns his pupils as a spiritual practice. Then he turns to a young woman who is attending for the first time. The woman, who has a shawl loosely draped over her hair, tells the group that she works in a software start-up. She has taken part in a dhikr once before, though not in a Sufi order. "You can ask what is in your heart," says Khaled. The woman thinks for a moment. The world of the tariqas (Sufi orders) and sheikhs is new to her. "Is it possible to take something away from one tariqa, and then something from another?"

"Let’s say you’re ill, and you consult four doctors who all use different treatment methods. Each of them is right in his own method. But not every method suits every person," says Khaled. "Each of us needs a system that suits our own body and our own personality. When you submit to various different treatments, it just causes confusion."

Then he goes on: "Tariqas are schools for healing the self. You need to discover which tariqa is right for you, which is best suited to your constitution." Later, the group discusses verses from the Koran about dealing with tests and challenges in life and why Sufism centres on the purification of the heart. The session closes with a communal prayer.

Alienation from Islam after the revolution

Following the Tahrir Square revolution of 2011, and the strengthening of Islamist discourse, young Egyptians from Cairo’s middle and upper classes felt increasingly alienated from Islam. At the same time, there was a growing interest in Sufism, which young people saw as an alternative through which to access the spiritual core of their religion. They saw the teachings of the Wahhabists and Salafists, by contrast, as narrowing and distorting Islam.

In an article in the online magazine Al-Monitor, the Berlin anthropologist Samuli Schielke talks about a "Sufi revival" among educated Egyptians. For several years now, they have been breathing new life into the mystical tradition that for a long time seemed to be in decline on the Nile. In some of these groups – as we might also observe in Turkey or Iran – Islamic doctrine is mixed with new-age elements, or practices from the Indian tradition such as yoga and meditation.

Sufism has strong roots in Egypt. According to an estimation by the Harvard Divinity School, 15 percent of Egyptians either belong to a Sufi order or participate in popular Sufi rituals. There is hardly any other Arab country where mawlid, the birthday of the Prophet Muhammad, is so widely celebrated as it is in Egypt. 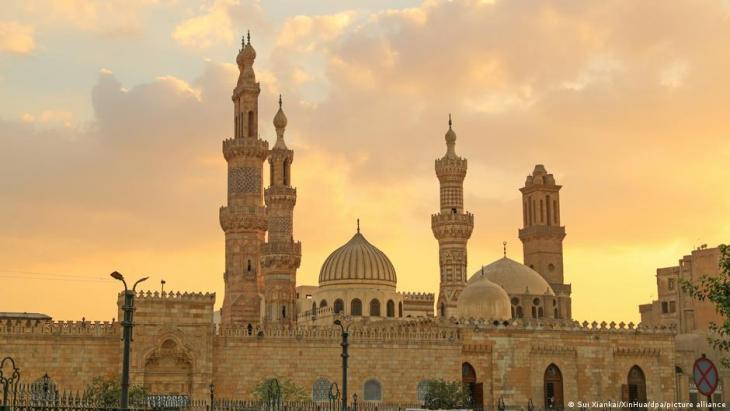 Contradictory relationship to mysticism in the cradle of Islamic orthodoxy: on the one hand, many of Al-Azhar’s lecturers are also members of Sufi orders – but on the other, there are also arch-conservative and Salafist elements among the university’s teaching staff. Moreover, for over a hundred years, Al-Azhar has also been involved in monitoring the brotherhoods’ activities within Egypt. A “High Council of Sufi Orders” has existed in the country since 1903, with responsibility for regulating the tariqas. The job of this government body, which is made up of representatives from Al-Azhar University and religious leaders from various brotherhoods, is to ensure that the practices of the Sufi groups remain within the bounds of religious rules and laws

But Egypt, home to Cairo’s venerable Al-Azhar University, is also a cradle of Islamic orthodoxy. The institution’s relationship to mysticism is contradictory: on the one hand, many of Al-Azhar’s lecturers are also members of Sufi orders – but on the other, there are also arch-conservative and Salafist elements among the university’s teaching staff.

Regulation of the Sufi brotherhoods

Moreover, for over a hundred years, Al-Azhar has also been involved in monitoring the brotherhoods' activities within Egypt. A "High Council of Sufi Orders" has existed in the country since 1903, with responsibility for regulating the tariqas. The job of this government body, which is made up of representatives from Al-Azhar University and religious leaders from various brotherhoods, is to ensure that the practices of the Sufi groups remain within the bounds of religious rules and laws. The council is involved in the appointment of sheikhs and grants permission for religious celebrations and gatherings.

This council is a result of the discussion during the 20th century, when Islamic reformers and orthodox clerics increasingly denounced Sufism, calling it superstitious. At the time, Egyptian sheikhs went on the defensive, and found themselves forced to prove that their practices were compatible with Islamic orthodoxy.

The rise of the Muslim Brotherhood, which regards Sufism as a distortion of Islam, presented a particular challenge to the mystics. Its founder Hassan al-Banna (1906-1949), who had previously been a member of a Sufi order himself, sharply criticised the Sufis of his day, though he also had high praise for the ascetic practices from the early period of Islamic mysticism.

Egyptian groups with Salafist leanings, meanwhile, condemn today's Sufi practices as heresy. In reaction to this, a few Sufi orders have taken on Salafist characteristics themselves over recent decades. An attack in 2017 saw the hostility towards Sufis reach a brutal climax.

Jihadists mounted an assault on a mosque on the Sinai Peninsula attended by Sufis, costing more than three hundred people their lives. Before the attack, an offshoot of IS had announced it wanted to destroy the Al-Jaririya order based around Bir al-Abed, a city roughly three hundred kilometres north-east of Cairo. 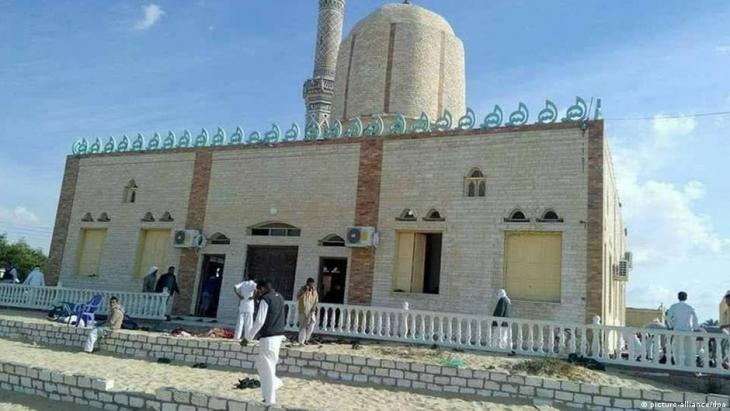 Hostility towards Sufis: in November 2017, the threat to Sufis in Egypt reached a brutal climax. A jihadist attack against a mosque in the Sinai Peninsula frequented by Sufis (pictured here) claimed the lives of more than three hundred people. An offshoot of IS had previously announced its intention to destroy the Al-Jaririya order around the village of Bir al-Abed, about three hundred kilometres northeast of Cairo

But Sufis were also involved in the 2011 Tahrir Square revolution, some of them even starting their own political parties after Mubarak was toppled. They justified this move by saying that some involvement in politics was necessary to provide an alternative to Muslim-Brotherhood and Salafist parties. At the time, it was feared that the rights and freedoms of Sufi movements would be curtailed after the Muslim Brother Mohamed Morsi was elected president in June 2012.

It followed that Sufi leaders would support the military when the latter ousted Morsi in 2013 following mass protests against his government. With the massacre of 800 Muslim Brothers in Cairo in August 2013, the new ruler and former military leader Abdul Fattah al-Sisi made it very clear that he would tolerate no opposition to his rule.

His regime supports Sufis as a counterbalance to the Islamists; the Sufi orders and the Egyptian government share a common enemy in the Muslim Brotherhood.

At the tomb of Ibn Ata'Allah al-Iskandari, the famous 13th-century Shadhiliyya master – one of the most important Sufi pilgrimage sites in the south east of Cairo – visitors enter a place that seems free from all these political and ideological complications. Al-Iskandari's teachings are read in Sufi orders all over the world, and represent an era in which Egypt was a cradle of mystic scholarship.

One of the sayings we have from Al-Iskandari, for example, is: "Whenever there remains any support for the ego within, even if it weighs no more than an atom, then you are prideful and have a devil that will lead you astray."

The devaluation of the Egyptian pound combined with rising food prices is taking its toll on Egypt. More and more people are slipping into poverty. Karim El-Gawhary reports from ... END_OF_DOCUMENT_TOKEN_TO_BE_REPLACED

Abortions are illegal in Egypt unless they are necessary to save a married woman's life. But that doesn't stop local women from having one. Egyptian society needs to acknowledge ... END_OF_DOCUMENT_TOKEN_TO_BE_REPLACED

Food prices doubled, salaries halved, banks restricting withdrawals: Egyptians now have the same problems as the Lebanese. But if things get worse here, the fallout will be far ... END_OF_DOCUMENT_TOKEN_TO_BE_REPLACED

Giessen, Eichsfeld, Kusel, Berlin – cars bearing old German number plates are the latest trend on the streets of Cairo. Many Egyptians regard the discarded plates as chic. What ... END_OF_DOCUMENT_TOKEN_TO_BE_REPLACED

Chinese President Xi Jinping's visit to Saudi Arabia in December 2022 may have rattled Washington, but it simply highlighted the Arabs’ desire to diversify their foreign relations ... END_OF_DOCUMENT_TOKEN_TO_BE_REPLACED

END_OF_DOCUMENT_TOKEN_TO_BE_REPLACED
Social media
and networks
Subscribe to our
newsletter