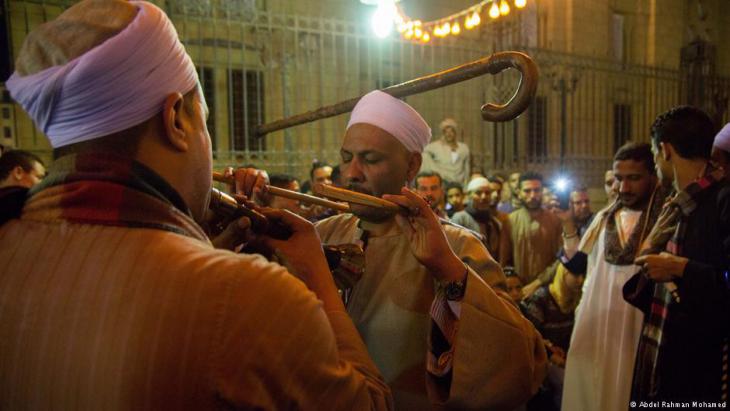 Sufism has a tradition going back centuries in Egypt. Now the government is coming out in support of the mystics in a bid to undermine Islamism. Some fear that the essence of the movement will be lost in the process – but there are other more unexpected by-products of the Sufi trend. Christian Meier reports from Cairo.

When he stood on stage and performed the dhikr, says Essam Abdou, it was as though he was flying. Then he felt the energy of his fellow band members spreading to him and together they would abandon themselves to the Sufi ritual, rhythmically uttering the name of God, faster and faster, louder and louder until they reached a state of ecstasy. All negative energy just fell away. It was like a meditation, says Abdou and immediately explains himself more precisely: no, it was even better than that. You take your voice – and your soul – to the extreme.

And Essam Abdou wasn't even a Sufi, a follower of Islamic mysticism. And he still isn't. A year ago, the 34-year-old Egyptian national actually left the Sufi band "Al Hadra", a group he'd co-founded and sung with. To understand the reasons why, we need to find out a little bit more about Sufism – and Egypt today, five years after the end of Islamist Muslim Brotherhood rule and the power takeover by Abdul Fattah al-Sisi, the President, elected to serve a second term earlier this year.

From Sisi mania to open derision

When al Sisi deposed the then-President Mohammed Morsi on 3 July 2013, the personality cult surrounding the new strongman appeared to grow immeasurably. So large were the wounds of the Revolution and the subsequent confusing battle between the Islamists, the secular revolutionaries and supporters of the old regime, so great the yearning for peace and order, that many Egyptians were happy to see a military man back at the helm. The buzzword "Sisi mania" made the rounds, a whole array of devotional objects appeared from chocolate to underwear, while politicians and regular citizens fell over themselves to express their adoration. 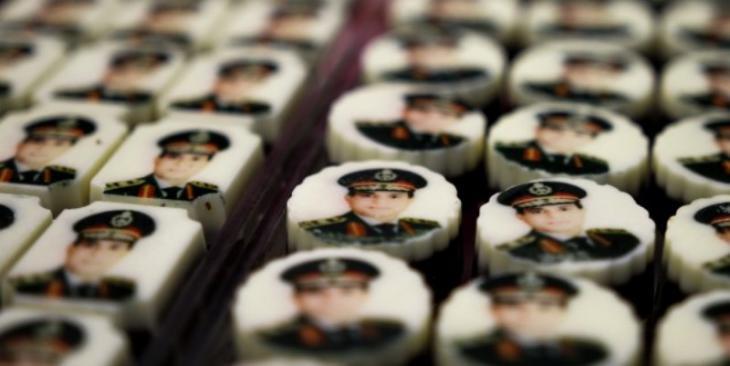 Warmest greetings from the dictator: once Sisi had deposed his predecessor Mohammed Morsi, the personality cult around the new strongman appeared to grow immeasurably. So large were the wounds of the revolution, so great the yearning for peace and order, that many Egyptians were happy to see a military man back at the helm again

And today? "Everything was better under Mubarak," say some Egyptians, when asked about the woeful state of the economy. Or: "Sisi, be gone!" – a hashtag that recently re-circulated online. Sisi was so affected by the criticism he even responded to it in a speech, complaining that his service to the nation was not being appreciated. Those who move in western-orientated circles openly mock the president.

But of course, the 97 percent support Sisi received in the – heavily controlled – re-election in March, was not a completely fabricated result. Whatʹs more: there is fear mixed in with the derision. Shortly after the takeover, the regime began to systematically limit the freedoms of the opposition and civil society, leeway that had seen an explosive increase during the 2011 Arabellion.

The latest measure is a new media law. Recently signed off by the President, the dissemination of "fake news" is now a punishable offence – although all Internet pages, blogs and social media accounts with more than 5,000 subscribers are regarded as media. In any case, the human rights organisation Reporters Without Borders says Egypt is currently "one of the biggest prisons for journalists in the world".

Things aren't much better for the rest of civil society. Since the introduction of a new law regulating their work, NGO operations in Egypt are subject to tough restrictions.  And anyone who thought that Sisi's re-election would mean the restoration of a certain amount of freedom was mistaken: several members of the opposition have been arrested and charged in recent months. 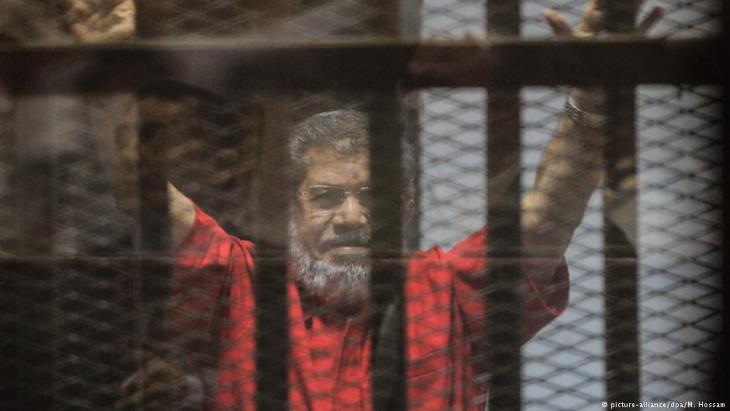 Egypt's ex-president behind bars: following mass protests against his rule, Mohammed Morsi was overthrown and imprisoned by the military under the current president Abdel Fattah al-Sisi in July 2013. Week-long mass protests by the Muslim Brotherhood led to the bloodiest day in Egypt's recent history: according to Human Rights Watch, at least 817 people died when the Egyptian security forces violently stormed the protest camps. Sisiʹs authoritarian regime regards the Muslim Brotherhood as terrorists

One who played a key role on Tahrir Square in 2011 says: "practically all those who were there with me at the time are now either dead, in prison or they've left the country." He himself only just avoided a conviction by the skin of his teeth – and now keeps a low profile. As do the majority of his countrymen.

The Revolution they fought for finally ended five years ago, on 14 August 2013, when security forces killed more than 800 Muslim Brotherhood supporters in a bloodbath on two Cairo squares. Although the liberal Revolutionaries and the Islamists were opponents – after that day it was clear that the regime would no longer tolerate any challenge to its rule.

Naturally, the government in Cairo is prioritising other aspects. Egypt continues to be locked in a bitter struggle with Islamist terrorists. The regime is inclined to tar everyone with the same brush – the Muslim Brotherhood, categorised as a terrorist organisation, "Islamic State" (IS) jihadists and other organisations that have been harrying security forces on the Sinai Peninsula for years now.

But the Islamist spectrum is wide-ranging and heterogeneous, including for example, alongside the above-mentioned groups, non-jihadist Salafists who have come to a partial arrangement with the regime. Their influence and that of the ostracised Muslim Brotherhood has declined, but not completely disappeared – Egyptian society is profoundly etched by Islamism, the nation was the cradle of this ideology. Consequently, however much the regime forces political Islamism underground, the threat it poses still remains.

And where are the Sufis in all of this? If you believe the assessments of Egyptian observers and experts, Sufis are the solution. "The plan is Sufism, I've seen it with my own eyes," says Abdou, the former Sufi singer. He's not the only one to perceive a new appreciation of mystical Islam on the part of the Egyptian regime. 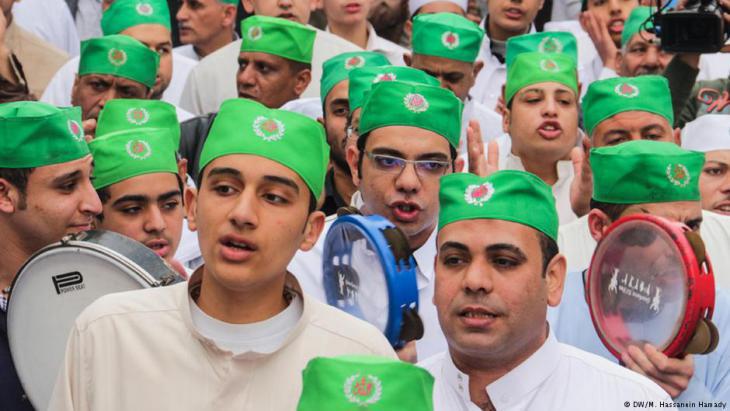 "Sufis rather than IS": suddenly, it seems, many young Egyptians are becoming interested in mysticism. The growing trend in Sufism appears to be resonating with whole swathes of the population

It's difficult to glean this assessment from concrete individual events, but correspondents unanimously report that the public visibility of Sufism is being promoted, for example by way of more television broadcasting time. Also, several new brotherhoods were authorised in recent years, including one under the leadership of the former Egyptian Grand Mufti Ali Gomaa earlier this year.

And it's clear that the upturn in Sufism is resonating with whole swathes of the population. The band formed by Essam Abdou two-and-a-half years ago initially performed to a small audience: "we were poor artists with no support of any kind," he says. But the venues gradually grew larger, until at some point the group was booked to perform at Cairo's opera house.

"That was like a dream," Abdou recalls. He and the other 15 members of the band stood on stage in front of more than a thousand people and performed their religious song rituals. Abdou doesn't regard the meteoric rise of "Al Hadra" as a coincidence. On the one hand, he believes that the band has struck a contemporary nerve. And on the other, that they have been officially sanctioned. "They would rather have Sufis than IS," he says.

In Doha, Arabs from Morocco, Tunisia, Egypt and Algeria are gathering to celebrate the first ever FIFA World Cup to be held on Arab soil. The criticism from Europe? Over the top, ... END_OF_DOCUMENT_TOKEN_TO_BE_REPLACED

November 2022 sees the Arab world firmly in the spotlight with the COP27 in Egypt and the FIFA World Cup in Qatar. Public trust in MENA governments is weak, thanks to their ... END_OF_DOCUMENT_TOKEN_TO_BE_REPLACED

Palme d’Or winner "Boy from Heaven" is a classic crossover film in which cultural elements are mixed together in haphazard and random fashion. Shady Lewis Botros bemoans the ... END_OF_DOCUMENT_TOKEN_TO_BE_REPLACED

COP27 in Sharm el-Sheikh is turning into a PR disaster for Egypt’s military regime. Instead of praise for the host, the news is full of solidarity for imprisoned activist Alaa ... END_OF_DOCUMENT_TOKEN_TO_BE_REPLACED

END_OF_DOCUMENT_TOKEN_TO_BE_REPLACED
Social media
and networks
Subscribe to our
newsletter