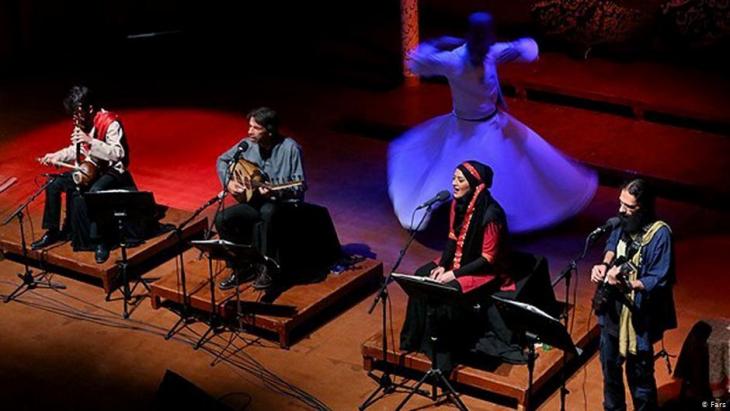 Sufism in Iran
Finding joy in times of trouble

Islamic mysticism from the Sufi tradition is experiencing a renaissance in Iran – much to the irritation of the Mullahs. In recent years, tensions between Sufis and the orthodoxy have escalated into tangible enmity. By Elisabeth Kiderlen

"Without the Sufis, I would never be able to stand everything that's going on here," a friend writes to me from Iran. For months now, people's nerves have been stretched to breaking point: the oil boycott, the way Iran has been cut off from the global finance system and international trade, the huge floods in March, when a third of the country was underwater, the rapid loss of purchasing power, the arrival of the American war machinery in the Persian Gulf, the growing threat of war and the USA's cyber-attacks on targets in the country – the civilian population is suffering.

"It stinks of war," writes Narges. "At least the Sufis allow me to forget my fear for a little while and think about something really important and comforting, and not just focus on the rate of inflation and stare at the news. I don't even have the money to buy my children an ice-cream any more."

The Sufis are very popular. The answer to the question: "What is Sufism?" that was once given by the great poet and mystic Jalaluddin Rumi (1207‒1273) is eagerly being taken on board as advice in the present day. Rumi said: "Find joy in your heart when the time of trouble comes." And Narges sends me a few lines from Rumi's most famous poem, as a mantra against the growing threat: "I died as mineral and became a plant, / I died as plant and rose to an animal, / I died as an animal and am now human, / What should I fear? When was I less by dying?"

Sufism and poetry have been closely linked for centuries. In pre-Islamic times, the Persian language was for many centuries the language of literature. It was only silenced when the Arabs conquered the country in the 7th century. Verse-writing was the first literary voice to resurface two centuries later, and to this day it remains "the most important literary voice" according to the historian and Middle-East expert Roy Mottahedeh. 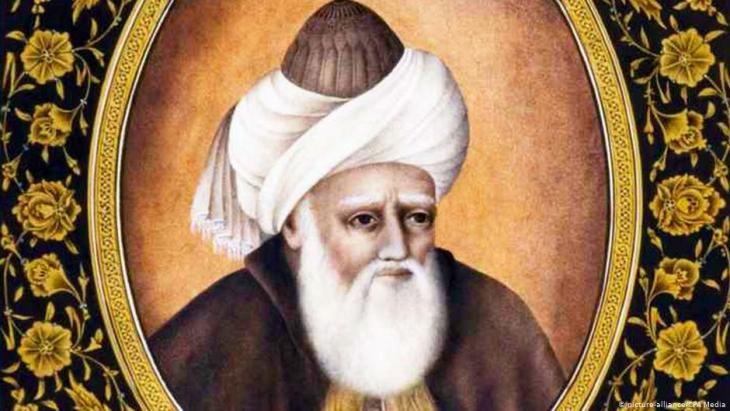 The answer to the question: "What is Sufism?" that was once given by the great poet and mystic Jalaluddin Rumi (1207‒1273) is eagerly being taken on board as advice in present day Iran. Rumi said: "Find joy in your heart when the time of trouble comes"

Poetry that gives comfort and guidance

At every opportunity, people from all social classes and circles still recite verses by Rumi, Omar Khayyam, Hafez, Saadi (all of them mystics) with great delight, and on important questions they consult the Hafez Oracle: eyes closed, they open the "Divan", the collection of Hafez's poetry, put their finger on a page and search for answers in the poem selected by chance.

Islamic mysticism developed early on, almost concurrently with the codification of religion and the formulation of rules and laws by legal scholars. Like all mystics, whether Christian, Jewish or Islamic, they seek the direct path to God; they yearn to look upon Him, to unite with Him in this life. A lovely example of this longing is the poem by the writer and ascetic Suhrawardi that pictures the soul as a dove. It was written in the 12th century:

"On the sandy hill of the hunting grounds she shed her fleshly shell, and with a fierce longing she hurried up to her old abode... It is as though lightning flashed through the park and then rolled away, as if no flash had ever been."

In her book Mystical Dimensions of Islam, German Orientalist and scholar of Islam Annemarie Schimmel gives an excellent description of how the words of the Koran laid the foundations for mystical doctrine in the 9th and 10th centuries: "The early Sufis lived under the threat of the Last Judgement, as described in the terrifying words of many sūras, until they discovered [that the Koran also contains] the promise of mutual love between God and man." For centuries, Sufism has centred on this love for love's sake, and does so to this day with ever new and more refined phrases, images and questions.

Islamic mystics can be found in all areas of Iranian society, in the educated urban classes, in the bazaars, among craftsmen and in the villages. And it can be found in all its forms, from simple folk Sufism, in which people call on God using His "99 most beautiful names" and strike up songs praising God, all the way to a highly developed pantheistic philosophy. And since time immemorial, there have been tensions between the religious orthodoxy and the Sufis, who reject the dry book-learning of the legal scholars. 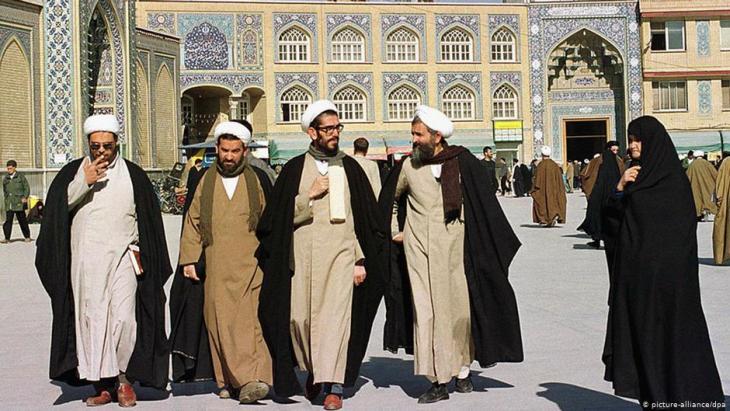 Shift in power: "For centuries," writes Elisabeth Kiderlen, "the orthodoxy governed everyday life in Iran through its interpretations of divine laws taken from the Koran. With the Islamic Revolution of 1979 and the formulation of political Islam, the religious scholars then began to rule the country in a very concrete way. But in recent years, power has shifted little by little between the Mullahs and the Revolutionary Guard Corps, between religion and nationalism, in favour of the military"

From competition to emnity

The Sufis claim that they have advanced to a sensitive and experience-oriented knowledge. The Mullahs, by contrast, disdain the mystics' ecstatic search for God, their singing and dancing, and their anti-intellectualism. And yet, over the course of history, orthodox religious scholars have also made some of the mystics' reasoning and ideas their own.

Hafez provides an excellent example of this. The poet came under threat again and again for his brazen provocations and ambiguities that are impossible to pin down. Yet his "Divan" occupies a place of honour right next to the Koran in many households, like a kind of sacred national treasure. During the Revolution, a few fanatical Mullahs wanted to ban Hafez, but they were unable to gain traction for this idea either with the people or even within their own circles.

But the tensions between Sufis and the orthodoxy have now escalated into tangible enmity. Over and over again in the past few years, Sufi prayer and meeting rooms have been shut and sometimes ‒ as in the cities of Qom and Isfahan ‒ razed to the ground with bulldozers. The Sufis themselves have been beaten and thrown into prison. Their popularity causes competition anxiety among the clergy; it eats into the terrain of the religious scholars. The Sufis' very existence undermines the close link between politics and religion.

The clergy is under pressure from three sources: a shift in political power, secularisation and the Sufis. For centuries, the orthodoxy governed everyday life in Iran through its interpretations of divine laws taken from the Koran. With the Islamic Revolution of 1979 and the formulation of political Islam, the religious scholars then began to rule the country in a very concrete way.

But in recent years, power has shifted little by little between the Mullahs and the Revolutionary Guard Corps, between religion and nationalism, in favour of the military – a development that is being reinforced by the threat from the United States. Another danger for the clergy lies in the growth of secularism. The code word for this is "North Tehran".

The prosperous north of the Iranian capital ‒ globally networked, educated, articulate, very materialistic and oriented towards the West ‒ has almost no interest in anything to do with the theocracy. The north influences fashions among young people, the relationship with consumption, liberality, intellectualism, morality and Mullah jokes.

It should not, however, be assumed that the anti-religious attitudes in North Tehran are shared by the rest of the country. The mosques may be more or less empty everywhere, but the strong piety of many Iranians is taking its own paths. And Sufism offers a way for people to practise their Islamic piety without accepting the ruling regime. 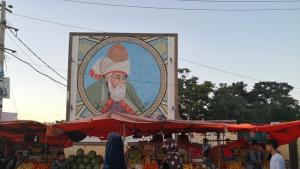 For the first time ever, a complete edition of Rumi's "Masnavi" has been published in German in verse. At the Sufi Festival in Hamburg in late November, Marian Brehmer met ... END_OF_DOCUMENT_TOKEN_TO_BE_REPLACED

When is it and when is it not acceptable to display a political banner at the World Cup in Qatar? The answer seems to depend largely on the political message, with fans ... END_OF_DOCUMENT_TOKEN_TO_BE_REPLACED

The Kurds are under attack from two sides: from Turkey, and from Iran. The situation in their territories in northern Iraq is becoming increasingly desperate. Birgit Svensson ... END_OF_DOCUMENT_TOKEN_TO_BE_REPLACED

Iranians do not want an Islam that interferes. They are fed up with a system that manipulates people with simple promises of salvation and anti-Western propaganda. Islamic ... END_OF_DOCUMENT_TOKEN_TO_BE_REPLACED

"The Voice of Dust and Ash" draws us into the life and times of Iranian maestro Mohammad Reza Shajarian with passion and joy, focusing on the man who stood, and still stands, for ... END_OF_DOCUMENT_TOKEN_TO_BE_REPLACED

November 2022 sees the Arab world firmly in the spotlight with the COP27 in Egypt and the FIFA World Cup in Qatar. Public trust in MENA governments is weak, thanks to their ... END_OF_DOCUMENT_TOKEN_TO_BE_REPLACED
Author:
Elisabeth Kiderlen
Date:
Mail:
Send via mail

END_OF_DOCUMENT_TOKEN_TO_BE_REPLACED
Social media
and networks
Subscribe to our
newsletter