The young man in the YouTube video holds up a plastic bottle filled with petrol. "In twenty minutes I am going to set myself on fire," announces the Tunisian Abderrazak Zorgui, shortly before committing suicide last December. It was his way of protesting against unemployment and poverty in his home town of Kasserine in central Tunisia. "If even one person gets a job, then my death was not in vain," explained the journalist in his last message. A few hours later he succumbed to his injuries in hospital – and protests broke out yet again on the streets of Kasserine.

Almost exactly eight years before Zorgui, the greengrocer Mohamed Bouazizi likewise took his own life through self-immolation, thus triggering the Tunisian Revolution – which in turn sparked a wave of protest from Egypt to Yemen that would come to be known as the Arab Spring. Since then, suicide rates in Tunisia have risen every year, especially in December. Some of these deaths, like that of Zorgui, are covered in the international media, but most remain unknown.

"What we have been witnessing since 2011 is a new phenomenon that did not exist before," says Fatma Charfi, a child psychologist and a member of the nationwide Technical Committee Against Suicide. "An individual with no prospects for the future kills himself out of sheer hopelessness. But by doing so in front of others, he tries to make his death an act of social protest. This is a message to the state: I have failed, but I don't want others to fail." According to Charfi, 25- to 40-year-olds are most at risk. And it is also striking that the suicide rate among children and adolescents has risen.

Many are worse off than before

Tunisia is considered a paragon of democratic change in the wake of the Arab Spring. No war broke out here like in Syria, Libya or Yemen. No military government seized power as happened in Egypt. People are no longer imprisoned and tortured for speaking their minds: both president and parliament have been democratically elected since 2011. 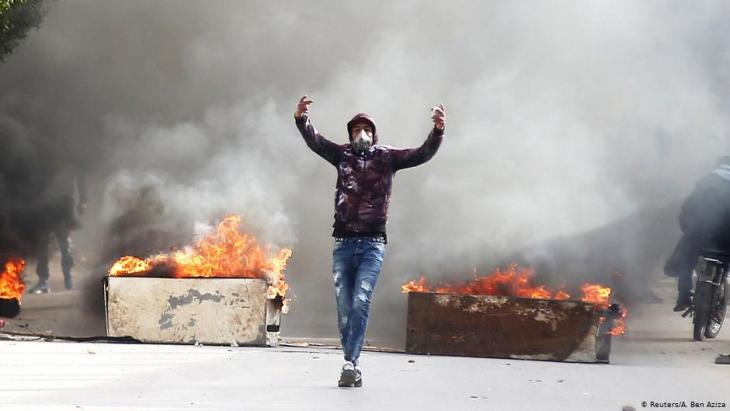 Outraged by the state's indifference and incompetence: the death of Tunisian journalist Abderrazak Zorgui at the end of December 2018 triggered furious protests. Youths set buildings and vehicles on fire and blocked roads in Kasserine. Even after Zorgui's funeral, riots broke out again in the poverty-stricken town, some 270 kilometres from the capital Tunis

And yet, despite the democratisation process, people still feel that economic prosperity has passed them by. Many are in fact worse off than before the revolution. And they are disappointed because the great expectations they had for what political change would bring have not been fulfilled. The country's suicide rate has been rising since 2011: self-immolation is now the most common method after hanging. Between 2011 and 2016, the number of self-immolations tripled each year. Forensic experts documented 148 cases during that period. Those who burn themselves do so publicly – in the hope that their death will make a difference.

In 2015 the psychologist Fatma Charfi joined the Technical Committee Against Suicide, whose members include doctors, forensic specialists, psychologists, child psychologists and first-aid workers. The committee's plan was to first research the actual suicide figures – because no official records were kept before 2015 – and then to raise awareness among occupational groups that deal with this problem. Among them were 500 doctors from all over Tunisia, but also journalists. Charfi says that part of the problem is that if the media reports thoughtlessly on suicides, it can motivate others to take their own lives in a similar fashion.

One reason for the spiralling self-immolations is the broad media coverage of Bouazizi's act. "The media spread the image of Bouazizi, whose suicide triggered the revolution, far and wide," says Charfi. "This coverage led others to think: 'If I'm going to kill myself, I want my death to set off a wave of protest. I want people to talk about me.'" This is why it is so important that reports in the media should not describe the exact nature of the suicide, cast it in positive light or turn the deceased into a hero.

Nevertheless, the copycat effect alone cannot explain the soaring suicide rate. It can be attributed instead to the dire economic conditions and political despair that have dashed people's hopes after the euphoria of the revolution. Since 2011 the unemployment rate in Tunisia has risen to 15 percent, and among young people it is more than twice as high. Even for university graduates, unemployment is likewise just under thirty percent.

"Since 2011 the chief problem for the younger generation in Tunisia has been hopelessness," is what Aymen N. believes. His good friend and fellow-student Karim S. took his own life in the autumn of 2011 – without any publicity, all alone in his apartment. 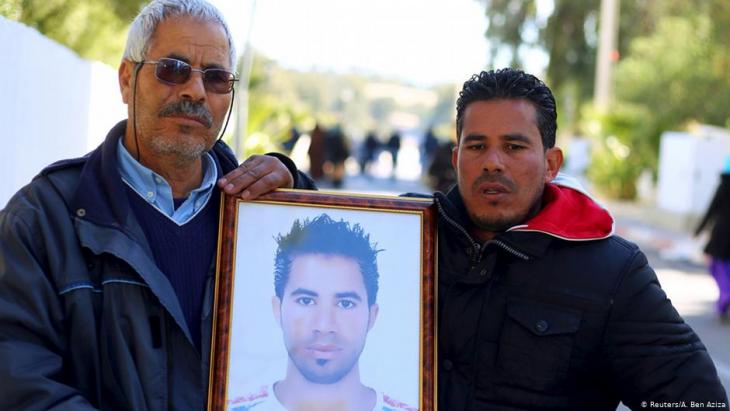 Like wildfire: on 17 December 2010, a young, desperate Tunisian salesman named Mohammed Bouazizi set himself on fire, triggering an uprising with his suicide that spread from Tunisia to many countries throughout the Middle East. Five years later Yahyaoui, another young Tunisian, took his own life after being denied a job, sparking protests in the town of Kasserine and other impoverished communities that had once led to the overthrow of Zine El-Abidine Ben Ali's regime

Just 27 years old at the time, the young man had been depressed for several months, recalls Aymen N.: "The revolution was a seemingly unattainable dream for all of us. When the dream came true, we had high hopes. And Karim somehow couldn't bear it when the reality turned out differently."

He was particularly downcast about the election victory of the moderate Islamist Ennahda Party in the summer of the same year. "Karim mentioned several times that life was no longer worth living if reactionary political parties could still be elected even after a revolution," says Aymen N., who likewise suffered from depression for several months after the elections. Then he decided to leave the country. He found work in Madrid and later in Germany. Today the 36-year-old lives with his family in Aachen.

He knows many Tunisians who did the same thing he did. "If we had had any hope that the situation would improve, we would have stayed there and kept on fighting," he says. "But this hopelessness has driven us out of the country, and driven some out of this life."

A total of 467 people attempted or committed suicide in Tunisia last year. But the number of unreported cases is enormous, says Najla Arfa of the Tunisian Social Observatory (OST). The organisation gathers suicide figures month for month from media reports or direct information from relatives. Suicide is forbidden in Islam, and in Tunisian society the topic is still taboo. When someone takes their own life, relatives often portray it as an accident, and family doctors cover up the true cause of death, Arfa says.

She wants to change all that: "We also want to show people that thoughts of suicide are not shameful, and that they are not the only ones who feel as they do." People have to admit to themselves that they have a problem and to talk about it, to seek help. For Arfa, however, alleviating the suffering of the population is not the responsibility of psychologists but above all the state. "This is about fundamental rights: the right to live in dignity, the right to education, the right to work. All of this is being called into question," according to Arfa.

Although, ever since the revolution, organisations like the OST have been able to report on problems in society without fearing repression, this freedom is, in Arfa's view, not an end in itself but only the first step: "We're trying to be the bridge between the state authorities and the people," she says. "In my opinion, that is the meaning of democracy: the voice of the people must reach the government so that it can make the necessary changes."

While Tunisians remain committed to democracy, they are feeling the painful lack of economic and political progress. Much has been achieved in the way of personal freedoms, but ... END_OF_DOCUMENT_TOKEN_TO_BE_REPLACED

"Tlamess", a visually striking experimental feature by Tunisian director Ala Eddine Slim, brings two drop-outs together in a weird, wild cohabitation in the woods: a desperate ... END_OF_DOCUMENT_TOKEN_TO_BE_REPLACED

Equality in divorce, a ban on polygamy: reformers of Islamic family law have a clear agenda. They are exploiting the ambiguity of traditional jurisprudence. By Joseph Croitoru END_OF_DOCUMENT_TOKEN_TO_BE_REPLACED

Hassan Aourid is one of the most important political and intellectual figures in Morocco. In interview with Ismail Azzam for Qantara, Aourid outlines his vision of the decline of ... END_OF_DOCUMENT_TOKEN_TO_BE_REPLACED

The Arab world is one gigantic pressure cooker. For the most part the lid of repression is on, but it is boiling over with increasing frequency. Whether in Lebanon, Iraq or in ... END_OF_DOCUMENT_TOKEN_TO_BE_REPLACED

END_OF_DOCUMENT_TOKEN_TO_BE_REPLACED
Social media
and networks
Subscribe to our
newsletter