Skip to main content
Sulaiman Addonia and "The Consequences of Love"

Sulaiman Addonia lived and studied in Saudi Arabia in the 1980s. His novel on the theme of forbidden love is set against the backdrop of the Saudi port of Jeddah. Rasha Khayat met up with the author in Hamburg 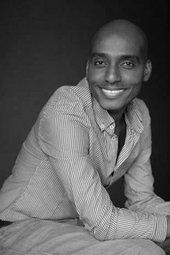 From Eritrea to the Sudan, to Saudi Arabia, and finally to England: Sulaiman Addonia

​​ The motif of forbidden love has long been standard fare in the repertoire of Western literature. Take Romeo and Juliet, for example, or Anna Karenina, or many of Jane Austin's heroines. Nowadays in the West we might expect the theme of "forbidden love" to feature perhaps in a TV soap opera, not, however, in more serious forms of art.

Yet it's a very different story in countries such as Saudi Arabia where such things remain the stuff of social taboo. All the more remarkable, then, that Eritrean-born author Sulaiman Addonia, who now lives in England, chose exactly this theme of forbidden love for his first novel, "The Consequences of Love".

The unusual novel tells the story of young refugee Naser, who, in the 1980s, flees to Saudi Arabia from his home in Eritrea. There he comes under the control of his Saudi sponsor, or "kafeel", who proceeds to subject his charge to every conceivable form of exploitation and abuse.

Naser's friends, too, are in a similar position. In order to escape from their desolate, often brutal everyday lives they tell one another stories about the veiled women of Jeddah, who, they say, secretly pass messages to those they wish to be their lovers by casually dropping little notes on the ground in front of them as they pass by.

In this way, the women, who are otherwise forced to lead completely separate and segregated lives, are able to communicate with the young men and declare their love to them. Then, one day, the downtrodden Naser finds such a message being dropped at his feet too. As he idly and unsuspectingly leans against a palm tree on the Corniche of Jeddah, a woman, veiled from head to foot in black, walks by and drops a piece of folded paper at his feet.

The unseen stranger confesses her ardent love for him, leaving Naser from then on yearning for an opportunity to get to know his mysterious admirer. Meanwhile, Fiore, as he decides to call the unknown woman, continues to pour out her love to him, day after day, in passionate letters. So that Naser will be better able to distinguish Fiore from the other black-veiled women, she tells him she will always wear pink shoes.

One of the remarkable things about Sulaiman Addonia's story is that it is the young Saudi woman who, each time, makes the move, taking the initiative to get closer to her lover. Naser it is who dithers, hesitates, is fearful of overstepping the mark both where the law is concerned and with Fiore personally. Hardly surprising really given the constant threat represented by the snooping "morality police" or the ever-present danger of his falling out of favour with the kafeel.

Against this background, the determination shown by Fiore to keep the "relationship" going is all the more astonishing. The setting, after all, is Saudi Arabia, home to one of the world's most repressive regimes and a country where the sexes are kept apart from one another to a greater extent than anywhere else in the world.

Fiore is certainly not a typical Saudi woman of the 1980s, as we discover when she dresses Naser up in an abaya, disguising him as one of her girlfriends so she can take him home with her. Or when she resolutely refuses to accept the husband her parents have chosen for her. This is something that Addonia, who was brought up by his mother and an aunt, is very well aware of.

"I grew up surrounded by strong women, and during my time in Jeddah, too, I heard about similarly spirited girls. I just wanted to show that Saudi women, too, have their ways and their means of getting what they want. And are often much more likely to do so than a young man like Naser."

One last glimpse of the lover

​​ Fiore's daring is not, however, destined to bring a happy end. Naser is arrested after being betrayed by a former schoolmate who works for the religious police. Even under torture, however, he refuses to reveal the identity of his lover. In the end, Naser is deported. As his ship leaves harbour he catches one last glimpse of a black-clad woman with pink shoes standing on the quayside.

Sulaiman Addonia's novel is rather conventional in its language and adherence to a straightforward chronological narrative. Fiore's passionate letters with which the novel is liberally laced are the highlights. Addonia cites some of the great European storytellers, such as Thomas Mann and Charles Dickens, as influences.

The real merit of this remarkable debut novel, however, has less to do with any outstanding literary qualities it may have than with the author's chosen theme. Along with Rajaa Alsanea's "The Girls of Riyadh", Sulaiman Addonia's novel is one of very few books to give us an insight into life in contemporary Saudi society.

Like his protagonist, Addonia too was a civil war refugee who fled to Jeddah in the 1980s. The sense of truth one gets from the novel comes primarily from personal experience Addonia says, though he adds with a laugh that no notes were ever dropped at his feet.

"At school we were always hearing tales of these girls who, it was said, wrote letters to boys. Everyone claimed to know a friend of a friend who had been the lucky recipient of such a letter. Though I have to admit I never actually got to meet any of the privileged ones."

Addonia has not been back to Saudi Arabia since moving to England in 1990. "My brother still lives there and he tells me that a lot has changed. The Internet and mobile phones must have made life very much easier for young people, I think. The country is making small and tentative steps forward, but I don't think that the progress can be stopped now that it has begun."

Would a story like that of Naser and Fiore still be possible today in the era of Myspace, Facebook, e-mails and mobile phones? "It would be a different story. But one that I don't know. And the thought that these girls with their notes maybe really existed was something that always gave us young lads hope that one day we might actually find love. That, to me, was something worth writing about."

Son of an Eritrean mother and Ethiopian father, Sulaiman Addonia was born in Eritrea. Following the Om Hajar massacre in 1976 he spent several years in a refugee camp in Sudan. Later he lived and studied in Jeddah, Saudi Arabia. He has lived in London since 1990. Consequences of Love is his first novel.

Janadriyah Cultural Festival in Saudi Arabia
Diabolical Temptations
A festival in the north of Riad has been celebrating Saudi Arabia's culture since 1985. Now, after 25 years, the festival organisers have finally decided against gender segregation. Hanna Labonté reports on a festival between two worlds

The Saudi Arabian Legal System
Firm Alliance between Rulers and Scholars
When a woman who had been raped was sentenced to imprisonment and strokes of the lash in Saudi Arabia in November, the Saudi leadership found itself confronted with a wave of criticism. But how realistic are demands for reform? The Islam scholar Guido Steinberg examines the Saudi legal system

END_OF_DOCUMENT_TOKEN_TO_BE_REPLACED
Social media
and networks
Subscribe to our
newsletter