As reform protests grow in the Sultanate, it's worth remembering that its ruler doesn't deserve to be mentioned among the worst of the Arabian autocrats. By Robert Kaplan 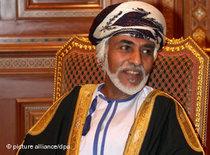 Competent autocrat: "I have never encountered a place in the Arab world so well-governed as Oman," writes Robert D. Kaplan

​​ The democratic upheaval across the Arab world has now become so profound and overwhelming – so unstoppable – as to engulf arguably the least oppressive and most competent autocracy in the region: that of Oman.

Compared with other Arab countries, Oman has scored comparatively well in recent years in human rights reports compiled by the U.S. State Department. Although there is no political freedom when it comes to choosing the country's ruler, citizens have participated in free and fair elections for the Majlis al-Shura that advises Sultan Qaboos bin Said.

Reports of arbitrary killings and arrests and politically motivated disappearances are rare. In the four decades since he overthrew his reactionary father, Sultan Said bin Taimur, Qaboos has single-handedly brought the country from the throes of anarchy and rebellion to being a strong and modern country with the minimum of repression. I have never encountered a place in the Arab world so well-governed as Oman, and in such a quiet and understated way.

Oman was historically two places. First, there are the coastal cities, which for millennia have been infused with the cosmopolitanism of the Indian Ocean that, thanks to the predictability of its monsoon winds, has brought to Oman the cultural richness of civilizations from as far away as East Africa and the East Indies. Then there is the desert hinterland, a warren of nomadic tribes battling each other for scarce water. 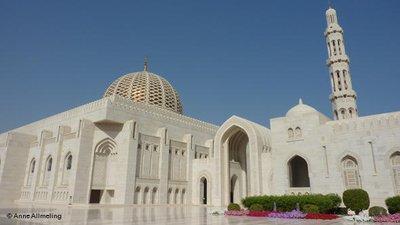 Qaboos has brought the country from the throes of anarchy and rebellion to being a strong and modern country with the minimum of repression, writes Robert D. Kaplan. Pictured: Sultan Qaboos Grand Mosque in Bousher

​​When Qaboos came to power, the coast and the desert were politically split. A separatist rebellion had broken out in Dhofar, in the southwestern desert near new oil deposits. The rebellion was hijacked by Marxist radicals. The British backed the Omanis of the coast. When the 29-year-old Qaboos came to power in 1970, he offered a general amnesty to the Dhofari tribesmen. Tribal guerrillas who surrendered were incorporated into the British-trained armed forces. The desert interior was economically developed.

Qaboos initiated a nonstop campaign of consultations with friend and enemy to unite the country. It was classic counterinsurgency-cum-nation-building, and over time it worked. By 1975 the desert rebellion was over and Oman was poised for development as a modern state. 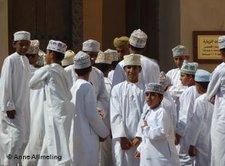 "Champion of education". In 2010, 12 per cent of Oman's state budget has been spent on education. Pictured: a school in Mascat, Oman's capital

​​Qaboos is one of a kind in the Arab world. He is unmarried, lives alone, plays the organ and lute, and composes music. A graduate of Britain's Sandhurst military academy, he may arguably be the most worldly and best-informed leader in the Arab world, who understands in depth both the Israeli and Palestinian points of view even as he balances Americans off against Iranians and provides U.S. forces with access agreements.

Infrastructure projects, women's rights, and the environment are mainstays of his rule, and he has avoided creating the sort of personality cult that plagues the region.

His shyness on the world stage is in line with the minimalist manner of Scandinavian prime ministers and in contrast with bombastic bullies like Iran's Mahmoud Ahmadinejad and Venezuela's Hugo Chávez. One Western expert calls Qaboos the only head of state in the Arab world you can call a "Renaissance man". In 1979 Oman was the only Arab state to recognize Egyptian President Anwar Sadat's peace agreement with Israel.

When I visited Oman in 2008 for my book, Monsoon, about the Indian Ocean, the bloodshed in Iraq still dominated the news. Thus, Western-style democracy was not a popular subject in Oman, associated as it was with America's misadventure in nearby Mesopotamia. 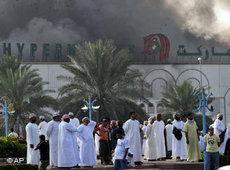 Qaboos has not been dynamic enough to satisfy a restive and unemployed, globalized youth, writes Kaplan. At the end of February, the Sultanate of Omanat experienced its first civil unrest in 40 years

​​But while I lavished praise on Qaboos and was deeply skeptical about exporting democracy, I also detected challenges with a growing youth population, the need for job creation, and the stirrings of a global culture. I mentioned these points in my book, but did not emphasize them – huge mistake! I did warn in passing: "Nondemocratic countries like Oman often evince efficiency when things are going well, but when problems arise in such systems the population, especially if it is young, can become quite restive."

This is exactly what has happened. Qaboos solved the problem of division between the coast and the desert interior, but he has not been dynamic enough to satisfy a restive and unemployed, globalized youth culture. Furthermore, the occasion of his 40th-anniversary celebration in 2010 did elicit a personality cult of sorts that may have played into the current unrest. 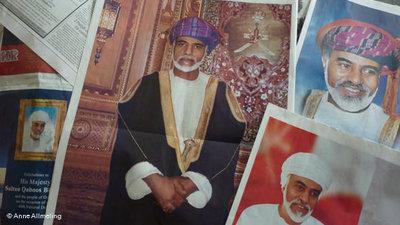 The occasion of Sultan Qaboos's 40th-anniversary celebration in 2010 did elicit a personality cult of sorts that may have played into the current unrest, writes Kaplan. Pictured: Omani newspapers celebrating Qaboos in 2010

​​Qaboos is also vulnerable because he has no heirs, and thus the succession is politically in doubt. Oman's system of absolute monarchy as it presently stands will not work any better than it currently does because it is impossible to imagine a another monarch who will rule as adroitly over the decades as Qaboos has. Thus, the population is genuinely concerned.

Democracy, or a form of it, is now required, though the sultanate must survive to provide overarching legitimacy for the state.

Don't think that Oman is unimportant. While small, with a population of less than 3 million, the deep-draft parts of the Strait of Hormuz that are essential for oil tankers are entirely in Omani territory. Given how dedicated Qaboos has been to his country's well-being, it would be sad if his reputation were sullied over these historic protests. For he should not be spoken of in the same breath as the likes of Muammar al-Qaddafi.

Robert D. Kaplan is a senior fellow at the Center for a New American Security and a national correspondent for the Atlantic. He is the author of Monsoon: The Indian Ocean and the Future of American Power.

Politics and Society in Oman
Outpost of the Arab World
The Sultanate of Oman will soon be celebrating "Forty Years of Renaissance". As a result of their seafaring, Oman's Muslims have created a tolerant society that is unique in the Arab world. Rainer Hermann reports from Muscat

END_OF_DOCUMENT_TOKEN_TO_BE_REPLACED
Social media
and networks
Subscribe to our
newsletter