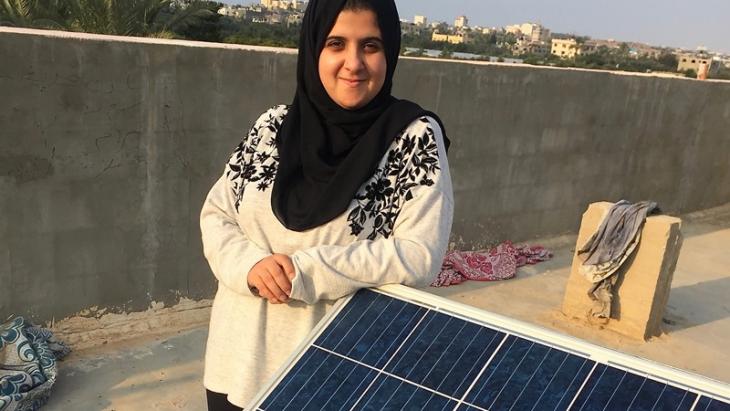 A go-getting young Palestinian woman is currently causing an energy surge in Gaza. Her goal: to make solar panels affordable for poor families. Her motto: do your thing, regardless of what others think. Inge Gunther reports from Gaza

The chickens on the flat roof are all in a tizzy. With fluttering wings, the birds inspect the two shiny silver-blue solar panels the workers have just put down to take a breather. In the midst of all the cackling, curious onlookers watch in rapt attention as the men manoeuvre the solar collectors to the roof's apex and drill the frame into position.

The residents of the half-finished two-storey building in Mograka, a poor village south of Gaza City, have been saving up for a long time for this day. The prospect of now being able to produce their own electricity instead of sitting in the dark in the evenings brings waves of happiness. "Now we can do our homework whenever we want," says eleven-year-old Rinat. Her grandfather laughs: "As long as you don't watch TV all the time."

All they need to do is connect the batteries and hook up the power supply unit. The sun will do the rest. Majd Mashharawi is also filled with sunshine on this important occasion, which compensates for many a setback. She is the head of an ambitious project for making solar energy affordable for low-income families in Gaza.

"Sun Box" is the name she chose for the company she founded a year ago. At the time she had no idea what a feat her project would turn out to be. Her idea was certainly unbeatable. Gaza has too little of everything and the electricity supply is a disaster, but what the Palestinian coastal strip does have going for it is more than enough sunshine, on at least 300 nearly cloudless days a year. 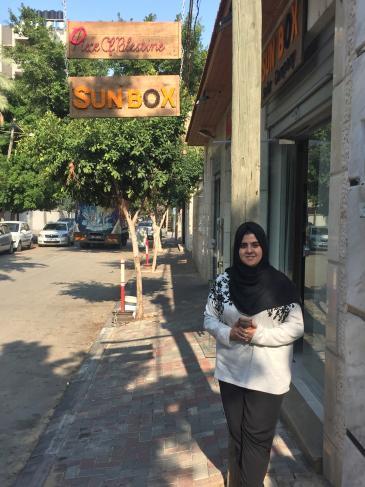 Mashharawi is only 25 years old, a superwoman in a headscarf. "I don't think much of NGOs," she says confidently. "My projects are profit-oriented." That sounds good, but seems more like a goal for the future. For the time being, she and her six-person team can expect to earn at most a meagre minimum wage. At 350 U.S. dollars, the solar energy system is priced as low as possible, far below the usual market rate.

Still, it is affordable for her clientele only thanks to subsidies coming from a crowdfunding campaign that raised around 60,000 dollars in early autumn. 521 donors from Asia, the USA and Europe chipped in small and in some cases larger sums to "bring light to Gaza".

Since then, Mashharawi has been able to relax a little more in the office at her shop on a side street in Rimal, an upscale neighbourhood in Gaza City. "Sun Box" is emblazoned boldly in sunny yellow letters on the sign outside. This is where Mashharawi steers the innovative company with verve and daring.

As the eldest daughter of a Palestinian refugee family, this is not a role she was born to fill. Her childhood was overshadowed by the second Intifada, her youth by three Gaza wars. But she doesn't linger on these facts when she tells her story. It's a tale of someone who refuses to accept difficult situations as inevitable, but instead seeks creative ways out, who develops out of problems new business models that are socially progressive, environmentally conscious and successful. So much so that this courageous woman from Gaza has attracted international attention.

"Living in Gaza is hard"

Recently Mashharawi was even invited to be a speaker at the TED Women 2018 conference in Palm Springs, California, where female activists, entrepreneurs and scientists from all over the world came together. At the last minute, the Israelis agreed to issue her an exit permit. It won't be easy for her to come home again. "Living in Gaza is hard when you know what life is like outside," she says. She has clashed more than once with representatives from Hamas who do not appreciate it when citizens demonstrate initiative. But it is the people in Gaza who persevere in the face of adversity who, Mashharawi says, "are my motivation".

During her engineering studies at the Islamic University, she had already begun investigating with fellow-students ways of making building blocks out of the rubble and ashes of houses destroyed in the war. In many places in Gaza this is done out of necessity, without consideration of their toxic content. The students wanted to find out more and sent samples for testing to Japan, whereupon Mashharawi was invited to spend six months doing research in the Far East.

The results paid off in several respects. The optimum mixture was identified and a factory in Gaza now produces eco-friendly building blocks according to this formula. Over thirty employees found work there. Whatʹs more, reports Mashharawi with a wink, her parents stopped begging her to get married instead of poring over technical tomes night after night. All of the sudden, she had become the pride of the family. 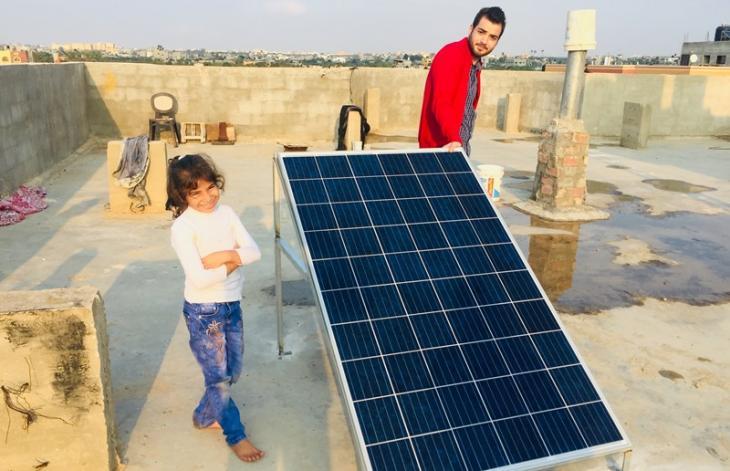 No more peering at empty screens

Thus encouraged, she set out to tackle a new challenge: solar energy. This would be the most sustainable solution to counter the notorious power crisis in Gaza. In Japan, Mashharawi had made contact with Chinese companies manufacturing solar panels at low cost and she ordered a few prototypes for Gaza. Things got off to a promising start when, in December 2017, the first module was installed on the house of a village leader.

The next day, his neighbours appeared on his doorstep. How could it be, they wanted to know, that he was watching a football cup while they could only peer at empty screens due to a power outage? News spread quickly that "Sun Box" was offering needy families a solar unit sufficient to power lights, computers and a TV or refrigerator – at low cost.

"People were placing orders before we even had the goods in Gaza," says Mashharawi. But then suddenly all forces seemed to conspire against her project. Israel closed the Kerem Shalom border crossing to intensify pressure on Hamas. For weeks, the delivery from China with 185 solar collectors for Gaza was stuck at the port of Ashdod. And by the time it was finally released – panels, batteries and power units each on separate days, driving Mashharawi to distraction – the customers had cancelled their orders. "We just don't have the money anymore," they told her.

Even with the campaign "Bringing Light to Gaza", things still looked bleak in the summer. "Come up with something or close the store," advised the people at Launch Goods, the crowdfunding platform. So Mashharawi recalculated how to cut costs even further by having two families share a solar unit while both getting a 100-dollar grant.

The concept seemed to work. Mashharawi found allies especially among women: in Mograka, for example, where her team installed five solar systems on various roofs that same day. Mona Musaweh, a 30-year-old mother of six, says with an impish smile that she kept pestering her husband until he agreed to the purchase. "It will make everything easier." No more sleepless nights running the washing machine because there was no electricity during the day. No more spoiled food that has to be thrown away because the refrigerator has shut down.

In the meantime, some 600 Palestinians in Gaza are using the "Sun Box". Even with output limited to an average of 500 watts per day, it has triggered a huge surge in energy for life.

With reported hostilities against Israeli journalists and the flag of the Palestinian territories flying on the streets and in the stadiums, it is clear the World Cup in Qatar is ... END_OF_DOCUMENT_TOKEN_TO_BE_REPLACED

When is it and when is it not acceptable to display a political banner at the World Cup in Qatar? The answer seems to depend largely on the political message, with fans ... END_OF_DOCUMENT_TOKEN_TO_BE_REPLACED

A leading light of Israeli theatre, Ofir Henig has directed the Israel Festival and is the only female director to have been awarded the Israel Theatre Prize. These days, however ... END_OF_DOCUMENT_TOKEN_TO_BE_REPLACED

Daniel Barenboim is not only a world-famous pianist and conductor. He has also worked tirelessly to foster understanding and reconciliation between Palestinians and Israelis. By ... END_OF_DOCUMENT_TOKEN_TO_BE_REPLACED

After a two-year hiatus, the Arab League re-convened at the beginning of November in Algiers against a backdrop of uncertainty and discord. By Pierre Boussel END_OF_DOCUMENT_TOKEN_TO_BE_REPLACED 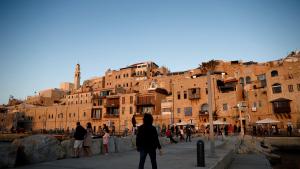 What do we mean when we talk about Palestinian literature: an exploration using the example of Adania Shibli’s slender novel "Minor Detail". By Miryam Schellbach END_OF_DOCUMENT_TOKEN_TO_BE_REPLACED
Author:
Inge Günther
Date:
Mail:
Send via mail

END_OF_DOCUMENT_TOKEN_TO_BE_REPLACED
Social media
and networks
Subscribe to our
newsletter