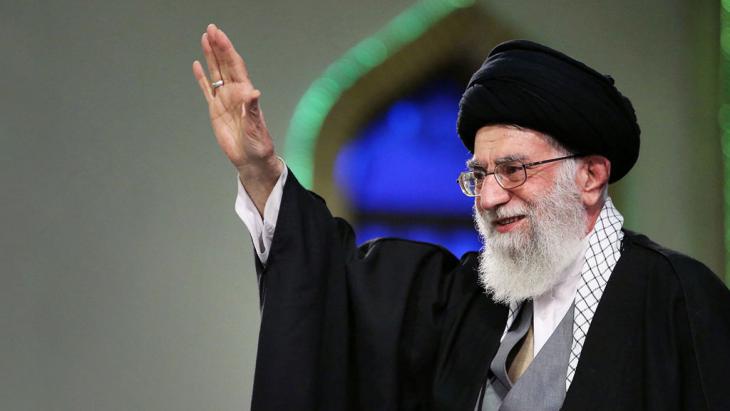 Although Saudi Arabia distances itself from groups like al-Qaida, its leaders share the terrorist organisation's mistrust of the Shias and fear the emergence of a "Shia Crescent" in the Middle East. But Iran has always seen itself not as a Shia but as an Islamic country and declares itself committed to a rapprochement between the different Islamic denominations. Ulrich von Schwerin analyses why Iran's attempts to further ecumenism within Islam have thus far been in vain

For al-Qaida, the self-styled "Islamic State" and other radical Sunni groups, Shias are not just members of a different Islamic denomination, they are infidels who must be killed. For these Salafist–Wahhabi groupings, Shias are even more dangerous than Christians or Jews, because they pass themselves off as brothers in the faith while pursuing their own subversive agendas. Al-Qaida and consorts see the Shias as a threat to the Islamic community that must be stamped out – if necessary by force.

This is why Shia districts, markets, mosques and shrines in Iraq have for years been the target of bloody attacks. In Yemen, Kuwait and eastern Saudi Arabia too, attacks have been on the rise in recent years. The tensions are fuelled by the rivalry between Saudi Arabia and Iran. In the eyes of al-Qaida and similar extremist groups, Shias are more committed to Iran than they are to their own countries. In their eyes, Shias are Tehran's fifth column and its willing accomplices in the battle for regional supremacy.

Fear of the "Shia Crescent"

Although Saudi Arabia distances itself from groups like al-Qaida, its leaders share the terrorist organisation's distrust of the Shias. For the Saudi kingdom, Iran's growing influence in Iraq, Syria and Lebanon can only mean that the nightmare scenario of a "Shia Crescent", which Jordan's King Abdullah once warned about, could become a reality.

Many Wahhabi clerics oppose Shias on theological grounds too. They accuse them of venerating Imam Ali almost as a god, of placing their imams on an equal footing with the Prophet and distorting the Koran.

Tensions between Sunnis and Shias, Riyadh and Tehran, are more pronounced now than they have been in a long time. Yet at the same time, Iran sees itself not as a Shia but as an Islamic republic. Since its founding in 1979, the Islamic Republic of Iran has regarded itself as the champion of a new order for all Muslims. Even though the zeal for exporting armed revolution has long since given way to pragmatic nationalist politics, Iran still sees itself as a defender of Muslims against imperialism – all Muslims, that is; not just the Shias. 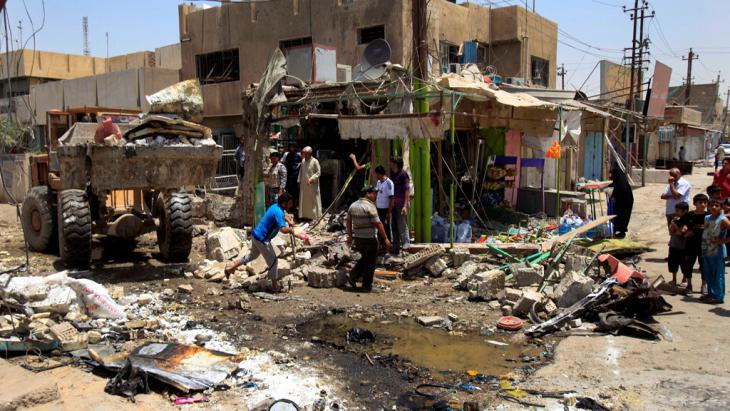 For years, Shia markets, mosques and shrines in Iraq have been the target of bloody attacks. The number of attacks has also risen in Yemen, Kuwait and eastern Saudi Arabia in recent times. "The tensions are fuelled by the rivalry between Saudi Arabia and Iran," writes Ulrich von Schwerin. Pictured here: the aftermath of a bomb attack on a Shia district in Baghdad

Commitment to theological and political rapprochement

Since the 1979 revolution, the Islamic Republic of Iran has been working for theological and political rapprochement between Sunnis and Shias. Revolutionary leader Ayatollah Ruhollah Khomeini forbid Shias from making disparaging remarks about Sunnis in speeches and sermons and instructed Iranian pilgrims to pray side by side with Sunnis during the hajj in Mecca. In 1982, an annual "Week of Unity" was introduced to promote dialogue between the denominations by means of conferences and public rallies.

Khomeini's successor, Ayatollah Ali Khamenei, even went a step further by founding in 1991 the World Forum for Proximity of Islamic Schools of Thought (Majma'-e jahani taqrib-e madhab-e eslami). Headquartered in Tehran, the organisation is today headed by Ayatollah Mohsen Araki, a cleric born in the Iraqi town of Najaf in 1955. In addition to the "Week of Unity", the forum also organises conferences, publishes journals and is busy setting up a university of Islamic schools of law.

According to the organisation, thousands of scholars from all over the world have taken part in its events. However, according to Western experts such as Wilfried Buchta, the external impact of the Majma'-e taqrib is limited. Although prominent Arab Sunnis occasionally attend its conferences, most of the participants do not come from the Arab world. Many Sunnis suspect the organisation – despite its protestations to the contrary – of trying to prove the superiority of Shiism or even of attempting to convert Sunnis.

Moreover, many Sunnis – not entirely without justification – see Iran's advocacy of Islamic ecumenism as a showcase policy consisting of nothing more than public declarations of intent. As far as they are concerned, it serves primarily to help Iran break out of its isolation. Another reason why the commitment to ecumenism rings hollow for many Sunnis is that the Iranian constitution of 1979 establishes the Islam of the Shia Jafari school of thought as the state religion. The Sunni minority in Iran is accordingly scarcely represented in politics and systematically discriminated against in religious matters. 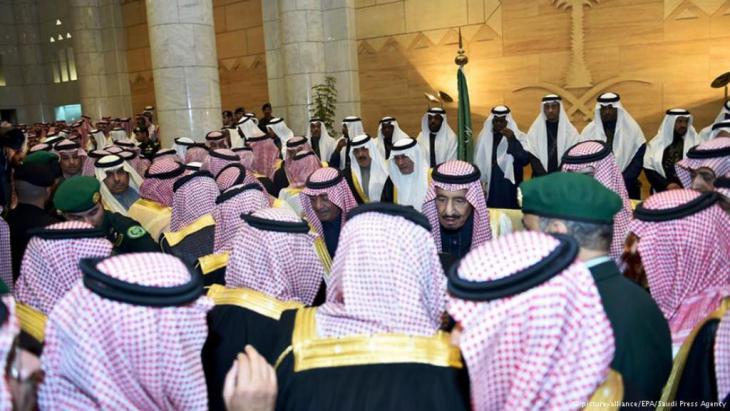 The Saudi ruling family distances itself from terrorist organisations like al-Qaida. Nevertheless, they are still suspicious of the Shias, fearing the emergence of a "Shia Crescent" extending from Iran to Syria and onward to Lebanon, says Ulrich von Schwerin

Moreover, although commitment to ecumenism is official policy in Iran, it is by no means supported by all Shia clerics. Even though no Shia would ever declare a Sunni to be an infidel, the orthodox clergy in Qom harbours serious reservations about a rapprochement with the Sunnis. While the Sunni Sheikh al-Azhar Mahmud Shaltut placed the Jafari school of thought on an equal footing with the four Sunni schools in a ground-breaking step in 1959, a corresponding fatwa has yet to be issued by Shia clerics.

Another problem with the Iranian policy of ecumenism is that it explicitly excludes Wahhabis. The Majma'-e taqrib is not only critical, but overtly hostile to the Islamic denomination that prevails in Saudi Arabia. Many Iranians see Wahhabis as sectarians who sow discord among Muslims and as unsophisticated desert-dwellers who have reverted to the days of pre-Islamic ignorance. They are also accused of allying with the imperialists and ceding Palestine to the Zionists.

The main problem with an ecumenical policy from both the Shia and Sunni sides, however, is arguably that it ignores the core of the conflict. Theological disputes undoubtedly play a key role in Iraq, Syria and Yemen as a way of highlighting and justifying the differences between the denominational groups. Certainly it is also important to maintain a dialogue and to mutually recognise each other as Muslims. But the core of the conflicts is in fact political, which is why, without a political solution, theological reconciliation is unlikely.

Iran is far more modern than many people realise: our view is clouded by media distortion and the overriding political narrative. The nation’s historic and cultural riches are ... END_OF_DOCUMENT_TOKEN_TO_BE_REPLACED

Saudi Arabia and its allies have agreed to set aside their differences with Qatar at a summit meeting of the Gulf Cooperation Council. The restoration of diplomatic relations ... END_OF_DOCUMENT_TOKEN_TO_BE_REPLACED

In an act of subversive diplomacy, Israeli singer and actress Liraz Charhi has recorded her latest album in secret collaboration with Iranian artists. By Carl Holm END_OF_DOCUMENT_TOKEN_TO_BE_REPLACED

In August 1978, four men set fire to the Cinema Rex in the Iranian city of Abadan, killing more than four hundred people inside. The event is said to have started the Iranian ... END_OF_DOCUMENT_TOKEN_TO_BE_REPLACED

Many in the West equate Middle Eastern music with the folklore of "A Thousand and One Nights". Tayfun Guttstadt demonstrates just how erroneous this is END_OF_DOCUMENT_TOKEN_TO_BE_REPLACED

END_OF_DOCUMENT_TOKEN_TO_BE_REPLACED
Social media
and networks
Subscribe to our
newsletter