Skip to main content
Synod of Bishops for the Middle East

Rome is currently playing host to a Vatican Synod of Bishops, which is meeting for a special assembly on the Middle East. Their goal is to draw international attention to the difficult plight of Christians in the region. Church representatives from the Middle East have also expressed a degree of self-criticism. A report by Mona Naggar 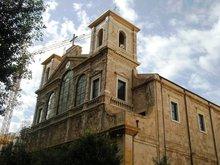 A Maronite Eastern Catholic Church in Beirut, Lebanon: the diminishing role of Christians in the Middle East is at the top of the agenda of the Vatican Synod of Bishops

​​ "As a Christian Arab, I feel comfortable in Lebanon, with my work and being an active Christian," says Father Fadi Daou. He is a professor at Saint Joseph's University in Beirut and a co-founder of Adyan, an organization that promotes interreligious dialogue among young people in the Arab world. Fadi Daou adds, however, that he doesn't represent the majority of Arab Christians. "The majority suffer from existential concerns dating back centuries. And these have only increased in recent years."

Daou is convinced that the Arab-Israeli conflict is the main reason for the crisis in the region and that it also affects the situation of Christians.

These "existential concerns" and the debate about the diminishing role of Christians in the Middle East are at the top of the agenda of the Vatican Synod of Bishops. Within the framework of this special assembly, attention is being given to the dramatic situation of Iraqi Christians, who have been the victims of acts of violence and have often been forced to flee into exile.

The assembly will also discuss the alarming decrease in the number of Christian Palestinians in the Holy Land. According to figures provided by local churches, Christians now make up only less than two percent of the Palestinian population. Father Gabriel Hachem from the Middle East Council of Churches (MECC), who is participating in the Synod, says that he and other Church representatives at first would only like to listen to what Christians from the different countries of the region have to say about their situation. 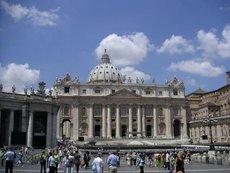 View of St. Peter's Basilica in the Vatican: Arab Catholic laypersons and clergy regard strife within the Church and its ossified structures as equally threatening as the marginalization of Christians in the region

​​ In discussions with Arab Catholic laypersons and clergy, it becomes clear that many see the marginalization of Christians in the region as just one of many problems. The faithful regard strife within the Church and its ossified structures as posing equally threatening dilemmas. Young Arab Christians complain that the Church is far too removed and not concerned with their interests. Women criticize the discrimination that they face within Church institutions.

Sister Marie Xavier from the Order of Antonine Sisters in Bikfaya, Lebanon has long since given up in her struggle for more rights within the Church. "The time just isn't ripe," she says, resigned. The gaunt women in her mid-sixties sits in her office and points to a pile of brochures. She is convinced that the Catholic Church already possesses enough documents in order to find the right approach to a solution. The most important question, however, is how to implement the existing documents. Sister Marie Xavier refers to the Apostolic Exhortation on Lebanon as an example.

The document, written in 1997 during the papacy of John Paul II, includes encouraging passages on the necessity of allowing women to participate in Church decisions.

Deir Mar Youhanna in Beirut, Lebanon: The country has the largest percentage of Christians of all the Middle Eastern nations

​​ Marie Khoury contributed at the time to drawing up the document at the Vatican. Khoury is a committed laywoman. She works as a psychotherapist and university lecturer. Her position is similar to that of Sister Marie Xavier. She has little hope that the situation for women within the Church hierarchy will change any time soon. "There are more nuns than monks, and even more women are engaged in social and charity work in Church institutions. Women do a great deal, but they have no power. We can't even help to decide how to implement what has already been decided upon on paper."

There are, of course, lone fighters, but it is not possible to speak of a women's movement within the Maronite Church or other Catholic Churches in the Middle East. She would like to see clear statements from the Synod on pedagogical issues. The curriculum of Catholic schools in the Middle East urgently needs to be brought up to date and adapted to the changed roles of the sexes in society.

Father Fadi Daou is also in favour of these concrete demands. It is an example of how the Church can exercise influence in Arab societies. Church institutions could have a still greater economic and cultural significance, not to mention that of the Christian segment of the population. Fadi Daou becomes uneasy when the role that Christians still play in society is depreciated.

"I think that many confuse our involvement in political power with our societal influence," explains Daou. "It is true that we have lost political power, but we also have to realize to what extent state structures and the society at large have changed for all individuals in recent decades." 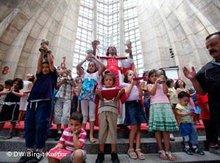 Mass in the Notre Dame de Harrissa cathedral in Lebanon: Many young Arab Christians complain that the Church is far too removed and not concerned with their interests

​​ According to Daou, it is not a matter of Christians alone taking responsibility for their rights in society. Instead, they should champion a state in which the rights of all citizens are protected, while promoting democracy and human rights. The Synod should not limit discussion to the role of Christians only from the point of view of minorities. "It is not only a matter of rights of Christians within the larger society. We require a project – a vision for everyone in the region."

Fadi Daou is far from being the only one with these demands. His viewpoint is also shared by Father Gabriel Hachem from the Middle East Council of Churches, which sees a democratic secular society as the best guarantee for pluralism. This is a goal of various social groups in the Arab region regardless of their religious affiliation.

One can't expect, however, that the trend of an ever-decreasing Christian presence in the Middle East will turn around in the coming years. Yet, the active and self-aware voices of Christian Arabs leave room for hope in the future.

Iraqi Christian Refugees
Finding a Safe Haven in Damascus
The history of Christianity in Iraq dates back to the first century AD, but since the outbreak of sectarian violence in the country following the US invasion of 2003, many Christians are fleeing their homeland and finding sanctuary in Syria. Stephen Starr reports from Damascus

Interreligious Places of Pilgrimage in Lebanon
Places of Dialogue and Common Devotion
The Lebanese civil war ended twenty years ago, leaving in its wake a society deeply divided both politically and religiously. Yet, apart from the numerous official efforts to bring various sides closer together, a spontaneous dialogue with the old traditions has always taken place among believers. Details from Beirut by Mona Naggar

Armenian Religious Service in Turkey
Breaking a Taboo in Akdamar
After almost 100 years, thousands of Armenians have flocked to the southern Anatolian city of Van to attend a religious service in the Church of the Holy Cross. The event marks a turning point in how Turkey treats its Christian minorities. A report by Susanne Güsten

Greek Orthodox Liturgy in Turkey
Uncovering the Country's Non-Muslim Cultural Heritage
The Turkish government's decision to allow the Orthodox patriarch to celebrate a liturgy at the ancient Panagia Soumela Monastery near Trabzon indicates that Ankara intents to further strengthen the rights of religious minorities in the country. Iason Athanasiadis reports from Trabzon